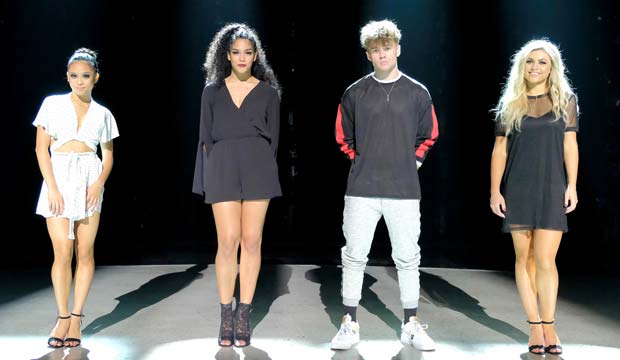 “So You Think You Can Dance” is down to its final four contestants: Jensen Arnold, Hannahlei Cabanilla, Genessy Castillo and Slavik Pustovoytov. They performed on Monday night, September 3, for America’s votes, but who stood out, who stepped up, and who deserves to win season 15? Find out below in our live blog with all the minute-by-minute developments as they happen.

These final four are somewhat controversial after the results for the Top 6. Jay Jay Dixonbey and Darius Hickman were both eliminated from the competition last week after receiving more rave reviews from the judges, who hardly had an unkind word for either dancer throughout the season. That left Slavik as the last remaining male dancer in the competition even though he delivered multiple routines that disappointed the judging panel.

Given Slavik’s poor reviews, it seemed odd that he would be the last man standing, but of course those results were based on voting from the previous week, before Slavik’s unfortunate missteps. Nevertheless, 85% of our readers disagreed with Jay Jay’s elimination and 86% opposed with Darius’s ouster. Going into tonight’s show 46% of our readers were rooting for Hannahlei to win the season, followed by Jensen (30%), Slavik (15%) and Genessy (9%). But you can keep voting in that poll at the bottom of this post.

So did Slavik redeem himself this week? Who gave the best performances of the night? Find out below starting at 8:00pm (all times listed are Eastern). And make sure to watch our exclusive Emmy interviews with “SYTYCD” choreographers Christopher Scott, Mandy Moore and Travis Wall.

8:02 p.m. – Rather than kick off tonight’s show with a group routine, the show began with the introduction of the top 4 and then an overview from host Cat Deeley about how tonight and the results show/finale next week will work. The performances tonight will include all possible pairs between the four (so three each), a duet with an all-star and then a final solo from all four. Then, next week, the voting results from last week will be added to the voting results from tonight’s show to determine the season 15 champion to be announced next week.

8:05 p.m. – The first dance of the night was from Genessy and Slavik who Cat reminds us is the only original pair to make it to the finale. They performed a hip hop routine from Luther Brown to “Poke It Out.” Their set and costumes were in blacklight which I found rather distracting and didn’t do the otherwise low energy choreo any favors. In their critiques of it the judges were complimentary, but mostly focused on reminding the pair that they’ve both made the finale and to forget about their missteps from last week and to dance confidently tonight.

8:15 p.m. – Jensen and Hannahlei‘s first time dancing together was a heels routine to “Dem Beats” from Brian Friedman. If you don’t know what a heels routine is, Hannahlei explained that it’s a combination of jazz, contemporary and burlesque all in one. You could tell in their performance that it was a style far outside the scope of what they’re used to, but still they enjoyed it. The judges were impressed with the entire production of the dance–from costumes to choreo to set–and agreed that they bravely stood up to what’s been asked of them all season and hit all their marks in a demanding routine.

8:20 p.m. – The first solo of the night came from Genessy (to “Cried”) after a short montage showing her journey on the show. Genessy’s story this season has been the growth of her confidence after doubting herself when measured against the crop of other talented dancers. She noted her contemporary dance with Slavik as the turning point for her on the show and the point at which America got to see her best as a dancer.

8:28 p.m. – Genessy was back again for the first all-star duet of the evening. She was paired with season 5’s Jonathan Platero to take on a samba to “Watch Out for This” from Elena Samodanova. Resident ballroom expert Mary Murphy was thoroughly impressed by Genessy in this routine after being admittedly nervous for her. She said her body had the rhythm of the piece and she “really stepped it up.”

8:39 p.m. – For Slavik‘s all-star duet he was paired with the season 8 winner Melanie Moore for a Travis Wall contemporary routine to “Gun.” The routine was one that is powerful in its silences and included a lot of space between movements, but Slavik brought a ton of intensity to it. As Nigel Lythgoe pointed out, the challenge of the routine was in the emotion required of Slavik as opposed to in the technical dancing and for Nigel as well as the other three judges he hit the emotion out of the park.

8:46 p.m. – Before Jensen‘s solo (to “Where Have You Been”) we went down memory road for her journey to get on the show. That journey began in season 12 and again in season 14 when she failed to make the final cut. In the clips we heard the judges critiques from the season that stress how versatile she’s been as a dancer and how her personal drive has helped her succeed each week.

8:53 p.m. – Next up was Hannahlei and Slavik for an African jazz routine by Sean Cheesman. The piece to “When Rivers Cry” included a ton of lifts, one of which gave Hannahlei a nasty bump on the head when she hit the floor in rehearsals (and was subsequently removed from the final routine)! Those lifts, however, were absolutely exquisitely executed by her largely due to her flexibility as well as Slavik’s strength as a partner. The judges were stunned by Hannahlei’s strength, especially considering her size, and most of their attention was given to her outstanding work in the piece.

9:04 p.m. – For Jensen and Genessy‘s duet they were given a broadway routine from Travis Wall choreographed to “Maybe This Time.” The piece required them to both dance with different personas which made building a sense of chemistry harder than usual, but they succeeded in serving the contrast in those characters to a tee. For Vanessa Hudgens they were brilliant at bringing the emotion of the two characters. tWitch gave Jensen the edge, but Mary exclaimed that Genessy has been at peak form throughout the night.

9:09 p.m. – Slavik‘s solo to “Some Minds” was preceded by a video that explained how he became inspired by dance and was driven to try out to the show by former champion Fik-Shun Stegall. Like Genessy explained, Slavik felt like an underdog going into the live shows, but points to that first night as a breakthrough for him and the highlight of the season.

9:16 p.m. – For Hannahlei‘s all-star duet she was paired with season 10 winner Fik-Shun for a hip hop routine to “Move Something” by Randi & Hef. Considering she was dancing with a champion and in the hip hop style for the first time live this season, Hannahlei definitely held her own and inhabited the groove of the piece. The judges panel was enamored by Hannahlei, telling her once again that there’s nothing she can’t do and she does it all brilliantly. Mary’s only concern is that in the past dancers that have made it all look so easy (like Hannahlei does) don’t typically win, but she hopes the audience will vote for her.

9:26 p.m. – Jensen‘s all-star duet was with Robert Roldan from season 7 for a contemporary piece to “Can’t Help Falling in Love” by Mandy Moore. The struggle of this dance for Jensen was in allowing herself to be vulnerable, which means it also offered her the chance to show a new side of herself. The dance earned a standing ovation from all four judges and a gushing swoon from Cat. Amidst tears, Mary told Jensen that her hard work has paid off and that her vulnerability was her biggest strength in the number.

9:33 p.m. – The video montage before Hannahlei‘s solo to “Back Again” showed us her journey on the show, especially how pivotal the ballroom round of academy week was since it was the most stressful for her as well as where she met her current boyfriend Jevohn Gentry (he was her partner in that round). In discussing the possibility of being named the winner Hannahlei got emotional, showing her passion for dance as well as the show.

9:41 p.m. – For Hannahlei and Genessy‘s duet they worked with contemporary choreographer Talia Favia on “Numbers.” The judges were all standing up for this one with Nigel commenting on how perfectly “tight” the two of them were and clarifying that no pair has ever been this tight all season.

9:51 p.m. – The final dance of the night was a cha cha by Jensen and Slavik choreographed to “Boom” by Oksana Platero. Because ballroom is Jensen’s style, this was probably the most unevenly matched pair of the entire season. Slavik did the best he could to keep up with her, but in the end it never gelled for them and the energy for the whole piece was brought way down. Mary called latin ballroom Slavik’s kryptonite, acknowledging that despite Slavik being off that Jensen still put herself in the right spot and was brilliant on her own.

9:57 p.m. – Again, next Monday is the season finale where we will find out which dancer polled the highest votes from last week and tonight to become the 15th champion. Who was your favorite tonight and who do you think deserves to win? Let your voice be heard in the comments below!

'So You Think You Can Dance' in a virtual world? Executive producer and judge Nigel Lythgoe twirls…

'So You Think You Can Dance' Season 16 video recap: Thoughts on b-boy Bailey's triumph and how to make…

'So You Think You Can Dance': Which finale routine featuring b-boy winner Bailey Munoz is your favorite…

Bailey Munoz exclusive interview about winning 'So You Think You Can Dance': 'I felt like a superhero up…

'So You Think You Can Dance' season finale: From 'cray-cray' to the sniffles, what were your fave…

'So You Think You Can Dance' finale recap: Who was named America's favorite dancer at the end of season…

Bailey Munoz WILL win and SHOULD win 'So You Think You Can Dance' tonight, according to fans we've…