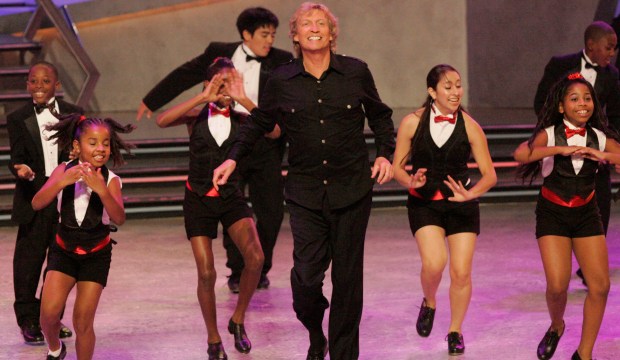 Despite having been a noted choreographer and song-and-dance man in his youth while even having his own troupe bearing his name,  Nigel Lythgoe, 69, apparently doesn’t like to trip the light fantastic himself these days.

While attending a tribute to Beatles drummer Ringo Starr last week in Los Angeles,  the British producer and director of such TV talent competition shows as “American Idol” and “So You Think You Can Dance” told Fox News that he isn’t a great dancer himself.

“I’m really scared to dance nowadays,”  the judge on “So You Think You Can Dance,” which completed its 15th season in September. “These kids are fantastic. They out-dance me doing ‘Pants on the Ground’ from ‘American Idol,’ if you believe it.”

That hasn’t stopped him from occasionally getting into the act sometimes on the dance show.

Not that he discourages others who aren’t exactly Fred and Ginger to not attempt to shake their booties now and then. “The simplest advice I have is to just enjoy yourself. Dancing is for everybody,” he continued at the event that also honored the late musical superstars Prince and Michael Jackson, who both knew how to groove. ”There are a certain amount of people that can be professional dancers, and then there are the rest of us – notice I include myself – dancing is to enjoy ourselves.”

Sorry, Nigel, but we must call you out on your way-too-humble statement. See the clip below  from the recent  finale, where you and fellow judge tWitch got into the act during one of the best routines from Season 15. Even when host Cat Deeley complimented him on his funky moves while donning a bright yellow rain coat and hat,  he rebuffed her praise: “No, I lost it a long time ago … I feel like a dancing banana.” Maybe, but one with appeal.

There is also video proof online that Lythgoe had the right stuff back in the ’70s when he was part of a  BBC troupe known as The Young Generation before he went on to perform with Cyd Charisse and Gene Kelly and do choreography for Ben Vereen and the Muppets. In this clip, he is even the main attraction.  So don’t be so shy, Nigel. You CAN dance.