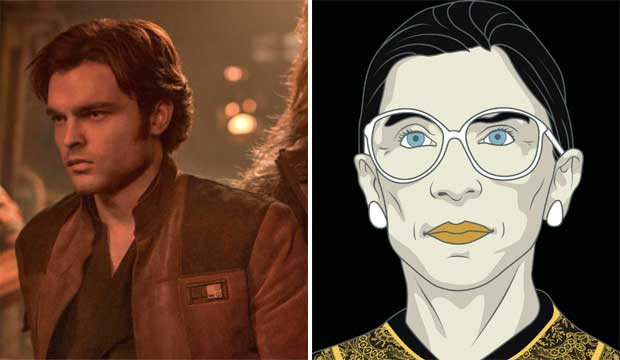 The weekend of June 1-3 at the box office includes one blockbuster that has disappointed despite making hundreds of millions of dollars, while an art-house movie outside of this week’s top 10 becomes a sleeper hit. It goes to show that success is relative in Hollywood, and that maybe a Supreme Court justice is a more secure bet than “Star Wars.”

Okay, so we probably shouldn’t expect a studio to bankroll a $200 million movie about, say, Neil Gorsuch, but we probably shouldn’t expect a $200 million sequel to “Solo: A Star Wars Story” either. It was number-one at the box office for the second week in a row, but suffered a precipitous 65% drop from its opening weekend, which itself was well below expectations. It took in another $29 million in the US for a domestic total of $148 million.

For most movies that wouldn’t sound too bad, but that’s only half as much as “Rogue One: A Star Wars Story” made in the same amount of time less than two years ago ($286 million). When you take into account the film’s under-performance internationally ($115 million so far from foreign markets) and its reported $250 million production budget (which doesn’t count marketing costs), “Solo” could end up being one of the season’s biggest financial disappointments.

Meanwhile, on a much smaller scale, the documentary “RBG” about the life of Supreme Court justice Ruth Bader Ginsburg has made history by taking in another $1.1 million, for a total of $7.8 million so far. That makes it the highest grossing film for the indie distributor Magnolia Pictures, whose movies have included the Oscar nominated films “I Am Love,” “A Royal Affair,” “Enron: The Smartest Guys in the Room” and “Capturing the Friedmans,” plus Oscar winner “Man on Wire.”

Magnolia’s previous record-holder was “I Am Not Your Negro,” which topped out at $7.1 million in 2017 and also earned an Oscar nomination for Best Documentary Feature, which may bode well for “RBG” in the awards season later this year. And with $7.8 million taken in it’s now the 29th highest grossing documentary of all time, just ahead of the 1994 nonfiction classic “Hoop Dreams” (not accounting for inflation).

Are you surprised by the “Solo” shortfall and the “RBG” windfall? And what does the future hold for the “Star Wars” franchise?