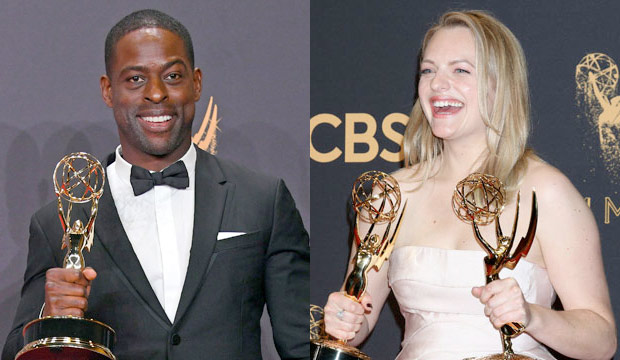 Even though Emmy voters love repeats, Best Drama Actor and Best Drama Actress haven’t repeated together since Bryan Cranston (“Breaking Bad”) and Glenn Close (“Damages”) back in 2008-09. Now our leading Experts from media outlets are predicting that it’ll happen again this year for reigning Emmy champs Sterling K. Brown (“This Is Us”) and Elisabeth Moss (“The Handmaid’s Tale”). Of the 18 Experts who’ve chimed in with their 2018 Emmy predictions, 10 of them think that both Brown and Moss will again. The other eight predict that one of these categories will be ripe for an upset.

For the second season of NBC’s hit family drama “This Is Us,” Brown’s character Randall Pearson is front and center in an emotional storyline involving becoming a foster parent. Fans also see Randall dealing with the aftermath of the death of his biological father (2017 Emmy nominee Ron Cephas Jones).

Moss continues wowing audiences in Season 2 of Hulu’s streaming series “The Handmaid’s Tale,” which is still airing new episodes. The season begins when her character, the very pregnant handmaid named Offred, escapes from captivity only to be caught and returned to the dystopian republic of Gilead.