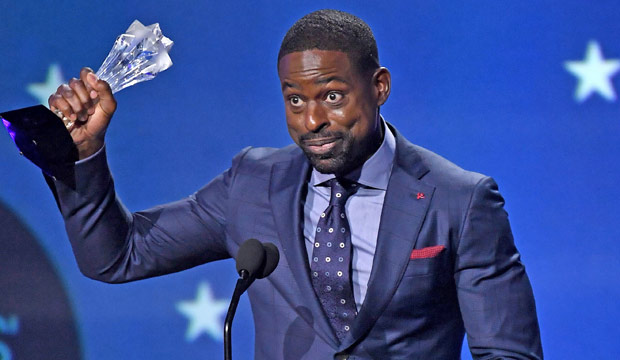 Sterling K. Brown continued his awards sweep for “This Is Us” on Thursday, winning the Critics’ Choice Award following his recent victories at the Golden Globes and Emmy Awards. When the SAG Awards winners are announced on January 21, will Brown’s streak continue? If so, he’ll be making history as the first black actor to ever prevail in his drama category.

Since the creation of the SAG Awards in 1995, only white men have been named the winner of this race that combines both lead and supporting performances from TV dramas. Looking back over the past 24 years, it’s shocking to see that Brown made history in this category last year simply by being the first black person even nominated. Only three non-white actors have previously contended here: Hector Elizondo (“Chicago Hope”), Jimmy Smits (“NYPD Blue”) and Rami Malek (“Mr. Robot”).

SEESterling K. Brown (‘This Is Us’): ‘When they called my name’ at Emmys, ‘I think my soul jumped outside of my body’ [Complete Interview Transcript]

As was heavily reported, Brown’s victory at the Emmys last year made him the first black winner in 19 years, since Andre Braugher (“Homicide: Life on the Street”). Brown spoke about Braugher in our exclusive one-on-one interview back in August, and then went on to mention him in his Emmy speech. Braugher, notably, has never been nominated for an individual SAG Award throughout his entire career, though he did earn an ensemble nom as part of the “Brooklyn Nine-Nine” cast.

According to Gold Derby’s exclusive odds, Brown is the runaway frontronner to win the SAG Award with leading 2/11 odds. David Harbour (“Stranger Things”) is next with 12/1 odds, followed by Peter Dinklage (“Game of Thrones”) and Jason Bateman (“Ozark”) tied for third place at 33/1 odds, and Bob Odenkirk (“Better Call Saul”) in last place at 50/1 odds. Who do YOU think will win?