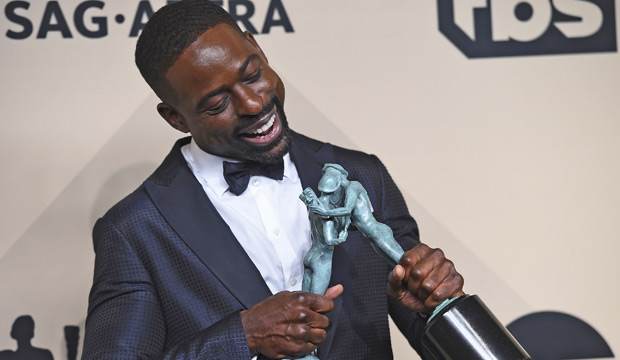 Sterling K. Brown completed his awards sweep for NBC’s “This Is Us” on Sunday, winning the Screen Actors Guild Award following his recent victories at the Critics’ Choice, Golden Globes and Emmys. In addition, Brown made history as the first black actor to ever prevail in his dramatic SAG category. His fellow nominees were David Harbour (“Stranger Things”), Peter Dinklage (“Game of Thrones”), Jason Bateman (“Ozark”) and Bob Odenkirk (“Better CAll Saul”).

Since the creation of the SAG Awards in 1995, only white men had been named the winner of this race that combines both lead and supporting performances from TV dramas. The four non-white actors previously nominated here were Brown, Hector Elizondo (“Chicago Hope”), Jimmy Smits (“NYPD Blue”) and Rami Malek (“Mr. Robot”).

At the SAG podium, Brown singled out his real-life wife Ryan Michelle Bathe as the “best scene partner anyone’s ever had.” Brown went on to win a second trophy a few minutes later when “This Is Us” took home the prize for TV’s best dramatic cast. Co-star Milo Ventimiglia gave the speech on behalf of NBC’s diverse ensemble.

Kristen Bell hosted the 2018 Screen Actors Guild Awards, which were voted on by more than 100,000 members of the unified SAG-AFTRA union that represents performers, radio and TV personalities, and other media professionals. “This Is Us” tied with “Veep” and “Big Little Lies” as the night’s biggest TV winners with two apiece. Check out our live blogs on this year’s television winners and film winners.