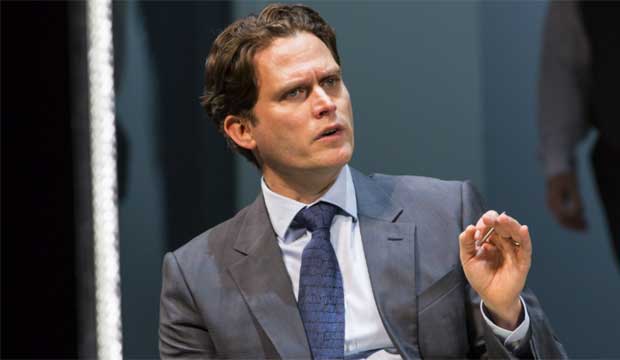 With a cast of 23, Ayad Akhtar’s play “Junk” features his largest ensemble to date. However, the sheer number of characters swirling around the stage at Lincoln Center Theater doesn’t stop Steven Pasquale from standing out. He delivers a thrilling performance as Wall Street shark Robert Merkin (loosely based on real life junk bond king Michael Milken).

The story charts Merkin’s rise, and inevitable fall, as he targets a Pennsylvania steel company for a buyout. Everson Steel is a locally grown company with a failing steel factory, but those numbers are hidden amid the profits of it’s small pharmaceutical offshoot. When Merkin discovers this weak spot he goes all in on a hostile takeover. The epic business war that results is full of wild ambitions, insider trading, and an inside look at the brutal world of Wall Street.

The role allowed Pasquale to show off a side we don’t normally see from him. New York audiences are used to seeing the actor in musicals as of late. He was robust in Roundabout’s “The Robber Bridegroom,” and wooed Kelli O’Hara with soaring love ballads in “The Bridges of Madison County.” In “Junk,” which is a play, Pasquale’s character goes to darker places and is mean, egotistical, and crackling with a hungry energy.

Merkin’s machinations come to a breaking point with a show stopping monologue in Act 2. Faced with the possibility of failure and legal recourse, he explodes. And Pasquale is seething with unbridled ambition as he unleashes a torrent of rage at a world he refuses to let hold him back. The moment is electric. It’s equivalent to watching a great tragic figure from Shakespeare or the Greeks as they charge forward with their plan, despite the certain death and destruction that awaits.

Critics were just as impressed as audiences. “Holding the show’s many moving parts together is Pasquale, whose good looks and intensity combine for a splendidly complex anti-hero” marveled Christopher Kelly (NJ.com). “His Merkin is both the kind of creative disruptive we’ve been conditioned to extol and the kind of law-breaking one-percenter we long to see locked up.” Sarah Holdren (Vulture) loved rooting for his “tight jawed, darkly charismatic performance.” And Jeremy Gerard (Deadline) claimed he was “sparking like a live wire on a stormy night.”

If anything keeps Pasquale from reaping a bid, it will be the same problem he faced when contending for “Bridges of Madison County”: a completely stacked category. Among those vying for Lead Actor in a Play are past Tony winners Denzel Washington (“The Iceman Cometh”) and John Lithgow (“Stories by Heart’), as well as acclaimed British imports Andrew Garfield (“Angels in America”), Jamie Parker (“Harry Potter and the Cursed Child”), and Mark Rylance (“Farinelli and the King”). Luckily for Pasquale, the Tonys ruled that Nathan Lane (“Angels in America”) and Michael Cera (“Lobby Hero”) would be considered for the Featured Actor category.