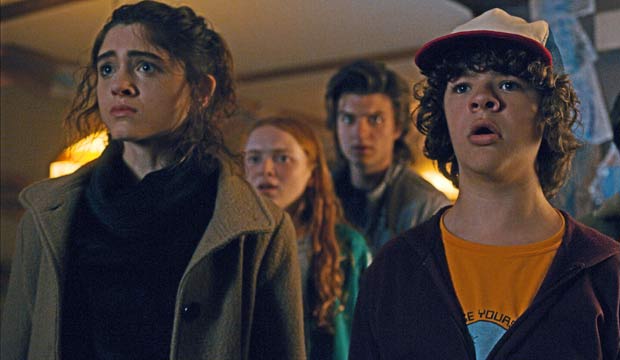 The MTV Movie and TV Awards announced their 2018 nominations on Thursday, May 3. MTV has been giving out its Golden Popcorn prizes since 1992, but this is only the second time TV shows have been invited to the party. The Netflix sci-fi drama “Stranger Things” was the inaugural winner of Best Show last year, while it star Millie Bobby Brown was awarded Best Performance in a Show. Will it repeat in season two?

Last year “Stranger Things” had four MTV nominations, also including Best Villain (for the CGI monster Demogorgon) and Best Hero for Brown. It lost those awards to Jeffrey Dean Morgan (“The Walking Dead”) and Taraji P. Henson (“Hidden Figures”), respectively. But this year it did even better in the nominations, picking up six bids, more than any other show. It defends its titles for Best Show and Best Performance, and it also contends for Best Kiss (Finn Wolfhard and Brown), Most Frightened Performance (Noah Schnapp), Best Scene Stealer (Dacre Montgomery) and Best On-Screen Team (Gaten Matarazzo, Caleb McLaughlin, Sadie Sink, Schnapp, and Wolfhard).

This year’s race for Best Show only includes one other carry-over from last year, “Game of Thrones,” which aired its penultimate season last summer. The other three nominees contend for the first time: the Freeform series “Grown-ish,” which is a college spin-off of ABC’s “Black-ish”; the “Archie”-based CW soap “Riverdale”; and the Netflix teen drama “13 Reasons Why.” “Thrones” and “Riverdale” have three total nominations each, while “13 Reasons” has two. But nominations totals don’t necessarily influence who wins since these awards are decided by fans voting online.

So will “Stranger Things” win again, or have fickle fans moved on? Make your predictions here, and vote in our poll below to let us know which show you think should win.

MAKE YOUR PREDICTION: Who will win Best Show?
To save your prediction, you must log in to Gold Derby. Click here to sign in with existing account -- or create a new one.
PREDICTthe MTV Movie and TV Awards now; change them until June 18