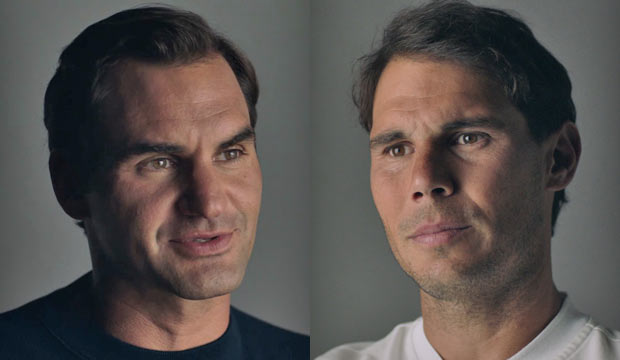 Swiss star Roger Federer and his Spanish rival Rafael Nadal have ruled men’s tennis for most of the 21st century thus far. But there was one epochal moment that proved to be a turning point in their competitive careers — and by “moment,” I mean the nearly five hours it took for Nadal to upset Federer at the Wimbeldon final in 2008 in what John McEnroe described as the greatest match in tennis history. The documentary “Strokes of Genius” premiered on the Tennis Channel on June 1, 2018, chronicling that match 10 years after the fact, when both Federer and Nadal are both still regularly winning grand slam tournaments.

At 4 hours and 48 minutes, not counting rain delays that stretched the game past sundown, it was the longest Wimbeldon final in the tournament’s history, long enough that “Strokes of Genius” has time to intercut the story of the match with interludes that tell us the stories of Federer and Nadal’s lives, and even the story of tennis as a whole, placing this match within the larger context of tennis history.

But it’s also a personal documentary that explores Federer and Nadal with help from the men themselves, who are interviewed extensively about how their rivalry has bonded them in a way that only rivalries can. “This is where rivals become an important part of your career, you know,” says Federer. “Either you’re team Rafa or you’re team Roger. It’s hard for the fans to go on both sides. Today I feel they can because they just feel like it’s so great that we’re still both at the game at this later stage of our career.” Nadal returns the respect by saying of Federer, “Even if you’re someone else’s fan, you need to be able to recognize excellence and Federer is excellent in every sense.”

This is reinforced by interviews with tennis legends Chris Evert and Martina Navratilova, who explain how competing against each other allowed them to see each other at their most vulnerable moments. We also hear from McEnroe and his contemporary Bjorn Borg, who battled each other intensely until McEnroe was begging Borg not to retire.

“Strokes” is just the second feature documentary directed by Andrew Douglas, whose previous nonfiction effort was “Searching for the Wrong-Eyed Jesus” (2003), which explored the American South through the eyes of alternative country singer Jim White. Since then he has been known for his work on scripted thrillers like “The Amityville Horror” (2005) and most recently the Netflix crime drama “Mindhunter.” He was nominated by the Directors Guild for his work on commercials in 2005, but will “Strokes of Genius” bring him another stroke of luck?

It has been a strong few years for sports documentaries, which have claimed the last two Oscars for Best Documentary Feature: “O.J.: Made in America” (2016), about the legendary footballer’s meteoric career and subsequent downfall, and “Icarus” (2017), about Russia’s campaign of illicit doping. Both films also won Best Sports Documentary at the Critics’ Choice Documentary Awards, where “Strokes” hopes to make an impact this fall (nominations will be announced on October 22). But as Federer and Nadal demonstrate in the film, it’s not just about whether you win or lose, it’s how you play the game.