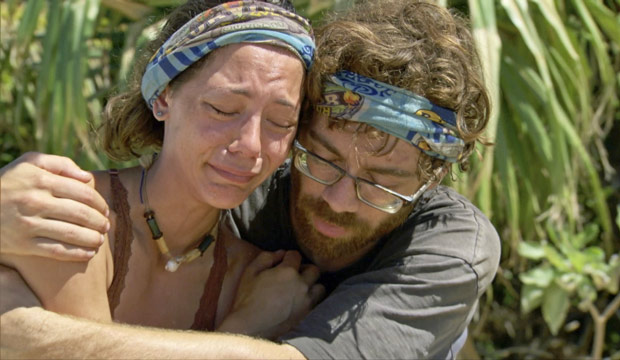 Just in time for the holiday season, “Survivor: David vs. Goliath” made fans reach for the tissues as they watched the Final 8 embrace their loved ones at the reward challenge. While the four remaining Davids (Nick Wilson, Christian Hubicki, Davie Rickenbacker, Gabby Pascuzzi) and four final Goliaths (Alison Raybould, Mike White, Angelina Keeley, Kara Kay) have blurred tribal lines in recent weeks, the unthinkable happened when Gabby floated the idea of betraying her nerdmance partner Christian. Did Gabby actually go through with her plan, or was Christian able to save himself?

SEE‘Survivor’: Top 20 hottest guys ever, ranked worst to best — Do YOU agree with our picks?

Below, check out our minute-by-minute “Survivor” recap of Season 37, Episode 12, titled “So Smart They’re Dumb,” to find out what happened Wednesday, December 5 at 8/7c. Then be sure to sound off in the comments section about your favorite castaways on CBS’s reality TV show, who annoys you the most, and who you think will ultimately join the “Survivor” winners list. Keep refreshing/reloading this live blog for the most recent updates.

SEE‘Survivor’ deleted scene: Carl feels like he should ‘go down in Survivor history’ for playing idol nullifier [WATCH]

8:00 p.m. — “Previously on ‘Survivor’!” During last week’s double-length episode Christian and Gabby betrayed their fellow Davids when they joined with Alison, Mike and Kara to send home Carl Boudreaux, aka the Godfather. That move likely won’t make Nick and Davie very happy, as they’ve been “David strong” ever since the merge. Only eight players remain on the island. Who will be voted out tonight?

8:01 p.m. — Although Nick was blindsided by the vote against Carl and understandably upset they gave up their majority, he was at least willing to discuss the fallout with Christian while also calling the “Mason Dixon” alliance dead.

8:02 p.m. — As promised and amidst tears,the players were greeted by one of their loved ones at the reward challenge: Davie, Alison, Gabby and Angelina were reunited with their moms, Kara with her brother, Nick with his dad, Mike with his boyfriend, and Christian with his girlfriend.

8:12 p.m. — For the challenge everyone was paired off–Mike and Davie, Angelina and Nick, Alison and Kara, Christian and Gabby–to compete for more time with their loved ones at a barbecue picnic. Mike and Davie held a lead for the first half of the challenge, but were passed up by Angelina and Nick in the third stage of the obstacle challenge. But at the last stage Davie was the first of all eight to balance his ball on the high beam to take back the lead only for Angelina and Nick to balance both their balls in quick succession to win reward! As the winners they were given the opportunity to choose two other players to join them with their loved ones. Nick picked Davie and Angelina picked Mike, both using the rationale that they owed it to these people on some level.

8:21 p.m. — At the reward barbecue, Angelina, Mike and Nick all appeared to be on the same page that they’d go to the final four together. But that left Davie feeling on the outside because he hadn’t been on the Jabeni tribe with them so he was hesitant to want to go through with that plan.

8:28 p.m. — The next immunity challenge required everyone to stand on a perch while holding up a pole connected to a bucket of water. In theory, losing balance, stepping off the perch or raising the pole too much would drop the water and eliminated someone. Mike and Gabby were the only one eliminated before the second stage of the competition which required them to each take one step back on the perch, putting their arm farther out.

8:30 p.m. — In that second stage, Alison and Angelina both dropped, leaving Davie, Kara, Christian and Nick with a chance at immunity. After 15 minutes, Jeff had them all take another step back, adding pressure to holding up the pole and everyone managed to get into position. After a few minutes Christian’s arm began to shake, but he regained control as Nick dropped his pole and was eliminated. A short time later Christian dropped anyway, leaving just Davie and Kara, but Davie dropped and Kara won immunity!

8:39 p.m. — After the immunity challenge, Gabby was still gunning for Christian, but he was under the impression that everyone would be voting Alison out. Naturally, Gabby was uneasy with her decision, emotionally speaking, but knew that she had to do it in order to win. She decided to confide in Nick and Davie about her plan, which was music to their ears after he betrayed him them at the previous tribal council.

8:41 p.m. — Again, Davie was not comfortable with working with Nick, Mike and Angelina and so he started working angles to keep Christian in the game. More than that, he wanted to keep Christian in the game as a shield for him, and so he went to Christian and warned him about Gabby’s plan. Christian made sure to ask if Nick was also willing to vote him out (Davie said yes), but instead of turning against Nick Christian decided to attempt to repair things with him. Nick played along, wanting to make Christian feel comfortable, but knowing that he can’t fully trust him ever again hoped that he’d still be able to blindside Christian.

8:45 p.m. — Heading into tribal council, the players wanting to vote Christian out knew he had an idol to potentially play so they planned on splitting votes between him and Gabby. Outside of that, Nick and Davie both were on the fence about voting Christian out and Christian was still considering how to get Alison out.

8:50 p.m. — At tribal council, the tension between Nick and Christian because of the previous tribal council was front and center. For Christian, he took full responsibility for his actions and Nick continued to make it sound like the two of them had made amends with a promise to move forward. Gabby discussed her personal need for reassurance at the start of the game and how she’s grown to a place where she can make her own decisions with confidence now. Alison was also in the hot seat having to once again discuss the ways in which she’s still a threat in the game.

9:00 p.m. — So in the end, the only two votes to send Gabby home came from Angelina and Mike which means that Christian was working alone in his attempt to vote against Alison. The rest of the votes, including Nick’s, went for Christian. And just as that voting pattern would suggest, the scenes for next week suggest that the next vote will be another scramble! Tribal lines are certainly blurred now, aren’t they?

SEE‘Survivor: David vs Goliath’ video recap: Christian Hubicki ‘was like the passion of the Christ’ — Will he win? [WATCH]

Here are the answers to Gold Derby’s contest questions for “Survivor” 37: Episode 12:

Who will be eliminated? Gabby Pascuzzi

Who will win Reward? Nick Wilson and Angelina Keeley

Who will win Immunity? Kara Kay

Will there be a kiss? Yes