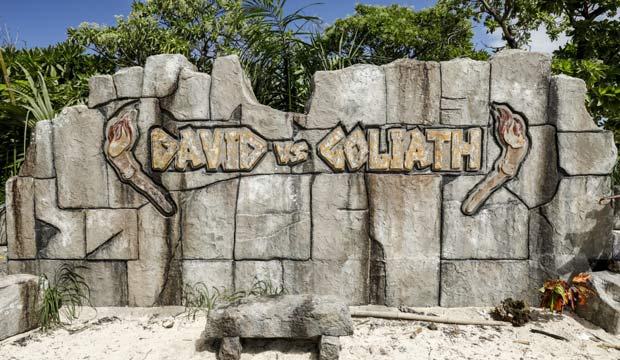 During last week’s Season 37 premiere of “Survivor,” Fiji’s rainy season took its toll on the castaways when Pat Cusack was injured after his boat hit a wave and he had to be medically evacuated. The weather continued having a drastic effect on the castaways — both physically and mentally — in Episode 2, titled “The Chicken Has Flown the Coop.” Were Gold Derby’s predictions correct that Natalie Cole or Lyrsa Torres would be the next player sent packing in “Survivor: David vs. Goliath”? Or did another castaway get plucked by host Jeff Probst?

Below, check out our minute-by-minute “Survivor” recap of Season 37, Episode 2 to find out what happened Wednesday, October 3 at 8/7c. Then be sure to sound off in the comments section about your favorite castaways on CBS’s reality TV show, who annoys you the most, and who you think will ultimately join the “Survivor” winners list. Keep refreshing/reloading this live blog for the most recent updates.

8:00 p.m. — “Previously on ‘Survivor’!” During the 90-minute season premiere, the castaways were divided based on the way people perceive them — underdogs on the David tribe and over-achievers on the Goliath tribe. Right away the Davids proved themselves at the reward challenge after Christian Hubicki and Lyrsa Torres chose which hurdles each team would run. Days later at their first immunity challenge, the Goliaths rallied and claimed victory at the massive obstacle course. However, before the Davids could visit tribal council Pat’s back was injured and he was removed from the game. How will Episode 2 play out tonight? Let’s find out!

8:05 p.m. – We kick things off at the David tribe with low morale following Pat’s medical evacuation. Over at Goliath, they’re dealing with a torrential downpour (congrats to those of you who predicted there would be rain!) as they struggle to build fire. As the sun rises, contestants are absolutely devastated, shaking and cold without fire. Christian Hubicki and Nick Wilson head out to collect wood where Christian makes it clear a girl has to be voted out first. Had they gone to tribal last week, Nick was on the chopping block. Now the pair of them hope to form a power duo and call themselves “The Mason-Dixon Line.” They are then greeted back at camp with a fire-making kit to help everyone feel better.

8:10 p.m. – Meanwhile, the budding romance between Dan Rengering and Kara Kay on the Goliath tribe is starting to garner attention. Dan has a hidden immunity idol and Kara is terrified someone will discover it. Alec Merlino thinks Kara is playing Dan and Kara is quick to tell the other girls on her tribe she is all in with THEM. Natalia Azoqa and Kara feel they hold the power because the boys are wrapped around their fingers and they know about the hidden immunity idol. Jeremy Crawford has no shame and is willing to go through anyone’s things and as Mike White stood watch, Jeremy found the idol in Mike’s pants. The secret is out!

8:15 p.m. – Back on the David tribe, Davie Rickenbacker has taken on the role of provider after catching an octopus last week. This allows him to go out on his own and before long he found their camp’s hidden immunity idol! The glorious treasure ignites his ambition and Davie is ready to play!

8:25 p.m. – Elizabeth Olson keeps hearing Lyrsa Torres’ name being circulated for early elimination over on the David tribe. She quickly goes and alerts her because the two formed an early alliance. Carl Boudreaux was the one tossing her name out there and now Lyrsa is furious and determined to vote him out. Over at Goliath, everyone seems to be having a good time hunting crab and watching Jeremy swim naked. Natalie Cole is not here for the games though and quickly alienates herself from the others. She’s completely clueless of the fact that most people want her off their tribe. John Hennigan is on her side though and sees her as an unlikely alliance. He quickly tells her Dan is floating her name around. John told her not to say anything, but she quickly loses her cool and goes on a tirade, asking why everyone would be targeting a 60-year old woman? She’s not afraid to be aggressive and tells them they’re acting like a bunch of Davids and shouldn’t be on the Goliath tribe. She won’t go down without a fight!

8:27 p.m. – Jeremy pulls Natalie aside and tells her she has a lack of self-awareness and doesn’t know how she comes across to others. She’s immediately defensive and Jeremy concedes she will never change. He’s ready to cut her out of the tribe immediately.

8:30 p.m. – Time for the next immunity challenge! One person from each tribe is going to climb a ladder and retrieve a key to unlock a boat. They’re then going to paddle out and retrieve bags of puzzle pieces. At the finish, they will balance a wobbly table while attempting to solve a block puzzle. First team to finish wins immunity and a reward of fishing gear.

8:35 p.m. – Alec is up against Bi Nguyen in the first stage. Alec finishes first and the Goliaths are off to an early lead. The Goliaths are paddling while Bi continues to work on her ladder. Goliaths begin paddling back and are close to lapping the Davids. This could be a blowout! The Goliaths begin working on their puzzle as the Davids begin paddling out for their puzzle pieces. The Davids finally return to the beach and can begin working on their puzzle. With puzzle genius Christian on the team, can the Davids stage a monumental comeback? As heat sets in, players begin dropping pieces left and right. Over an hour later, the Goliath tribe has established a solid lead. Finally the Goliath tribe wins immunity and reward! Jeff has nothing for the Davids.

8:42 p.m. – The David tribe heads back to camp to discuss their devastating loss. Many members of the tribe continue to think Lyrsa is the weakest link, even though she won the season’s first challenge for the tribe. But Gabby Pascuzzi is getting paranoid she’s on the chopping block. Lyrsa is determined to stay in the game and her and Elizabeth begin to hatch a plan to vote out Jessica Peet. They recruit Gabby and Christian in hopes voting out Jessica will knock Bi and Carl down a notch as well. Meanwhile Gabby practically begs Christian to protect her. Christian tells Nick about the plan to get rid of Jessica and it appears Mason-Dixon is the swing vote!

8:59 p.m. – The David tribe meets up with Jeff and each member lights their torches in the first tribal council of the season. They recount the brutal rains that hit camp throughout the early days, bringing their tribe closer together. Quickly, Jeff asks about how they shift to vote each other out? Lyrsa says she knows she’s being called the weakest player, but she doesn’t agree with it. Bi says she’s simply voting based on performance tonight. Christian confirms that the votes have been organized and someone will be sent packing. There aren’t nine targets. Considering there won’t likely be a swap anytime soon, they need to think about performance. Christian is so interesting to listen to that basically everyone sits their transfixed as he speaks. Then it’s time to vote! And just like that (snaps fingers), Jeff announces that Jessica has been eliminated on Day 6. Blindside! The Mason-Dixon strikes! As tribe members pick their jaws off the floor, Jeff snuffs Jessica’s torch. That’s a wrap for tonight!

Here are the answers to Gold Derby’s contest questions for “Survivor” 37: Episode 2:

Who will be eliminated? Jessica Peet

Who will win Reward? Goliath tribe

Who will win Immunity? Goliath tribe