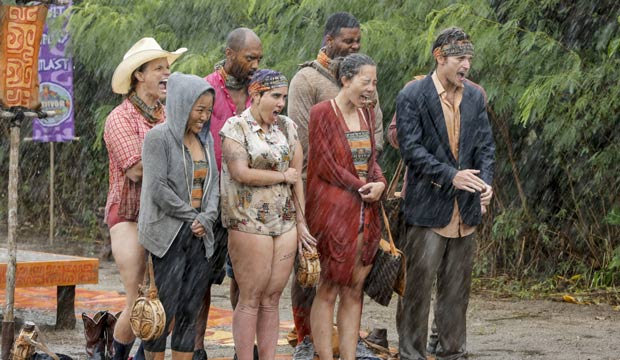 So far during “Survivor: David vs. Goliath” the Davids have lost both immunity challenges while the Goliaths continue proving their dominance. Did the Davids’ losing streak continue in the third hour, titled “I Am Goliath Strong,” or were they able to come together to pull off a victory? According to our exclusive racetrack odds, the castaways most in trouble of being voted out heading into the episode were Goliath’s Natalie Cole and David’s Carl Boudreaux. Were we correct?

Below, check out our minute-by-minute “Survivor” recap of Season 37, Episode 3 to find out what happened Wednesday, October 10 at 8/7c. Then be sure to sound off in the comments section about your favorite castaways on CBS’s reality TV show, who annoys you the most, and who you think will ultimately join the “Survivor” winners list. Keep refreshing/reloading this live blog for the most recent updates.

SEE‘Survivor’ 37 deleted scene: Chef Alec has all the girls giggling with his ‘nice and fluffy’ white rice [WATCH]

8:00 p.m. — “Previously on ‘Survivor’!” During last week’s second episode, Jessica Peet was blindsided by her tribe thanks to self-described “nerds” Christian Hubicki and Gabby Pascuzzi joining up with Elizabeth Olson, Lyrsa Torres and Nick Wilson. With the Davids down two numbers (Jessica and Pat Cusack) things are looking bleak for this team of underdogs. Can they rally in Episode 3? Let’s find out!

8:01 p.m. — After last week’s tribal council, Davids Davie Rickenbaker, Bi Nguyen and Carl felt blindsided and vulnerable by Jessica’s elimination. Davie spoke with Christian about how he felt close to him and Nick which led Christian to do some damage control and throw Gabby under the bus. That put Gabby on Davie’s radar as one to watch out for going forward. Nick was in positive spirits believing that if the Davids lose another immunity challenge that they’ll be perfectly situated in the middle and have the chance to decide again who goes home. Not in positive spirits was Carl who took the decision personally, but Bi was inspired to play the game even harder. She approached Nick and angled to get Gabby out next.

8:05 p.m. — At the Goliath beach, it was smooth sailing as they put their fishing gear reward to use. John Hennigan was in a particularly good mood, excited by the prospect of the game and getting to know everyone better. One player he wants to work with is Natalie, but unfortunately she continues to rub everyone else in the tribe the wrong way.

8:07 p.m. — Two other players that began building trust were Jeremy Crawford and Mike White. Jeremy opened up to Mike about his struggles to relate to his father growing up which showed us an emotional and reflective side of a player that has already been a bit confrontational so far this season. Mike acknowledged how sweet of a moment it was with Jeremy, but cautioned that he’s seen the sneaky side of him (looking through other people’s stuff for idols) and might not want to play too far into the game with him.

8:13 p.m. — Despite the rest of her tribe slowly turning against her, Gabby continued to feel close to Christian. Nick engaged the rest of the tribe in their plots to oust Gabby next, potentially setting Christian and Nick up to have different opinions about what to do with her at their next tribal.

8:15 p.m. — Jeremy had his eyes and ears open at his beach, noticing that a lot of players were paired off for most of the day. He brought that up to Kara Kay who only saw it as needless strategizing too early in a game that they are already dominating. Stupidly Jeremy brought the issue up to the entire tribe and put himself squarely in the center of drama of his own creation. Not knowing when to play it cool is one of the easiest ways to put a target on your back in the beginning of the game. One player that noticed that was Angelina Keeley who pointed out that it could potentially save Natalie if Jeremy keeps putting himself out there as a threat.

8:18 p.m. — Jeremy used his knowledge of Dan Rengering‘s idol with mostly everyone else in the tribe to varying effects. Some that thought they were close with Dan questioned why he hadn’t told them about it while John only saw Jeremy as an even bigger threat for his scheming and constant game-talk at the wrong point of the game.

8:22 p.m. — Once again the rain poured as the players arrived for their third immunity challenge, a test of agility as they untangle ropes and pull a heavy sled before completing a puzzle. The tribes also played for a reward of comfort: blankets, pillows, a hammock and chairs to take back to their camp. With two extra players, Goliaths chose Natalia Azoqa and Angelina to sit out, noting that Natalie wanted to stay in as one of the puzzle solvers.

8:26 p.m. — Alec Merlino of the Goliaths got tangled in the ropes early on, giving Bi of the Davids a chance to catch up and maintain pace heading in to the second leg of the challenge where three members untangled another set of ropes. In that stage, the tribes were evenly paced but Goliaths finished slightly earlier. Both tribes hooked their ropes and rings to their sled at the same time, entering the final stage (the puzzle) at the same time. Natalie and Alison Raybould were puzzle makers for the Goliaths while Gabby and Christian took over for the Davids.

8:29 p.m. — And just like that, the Davids mounted an upset by solving the four-piece puzzle first! That earned their first immunity of the season and triggered the Goliaths to head to tribal council for the first time. Before heading back to camp, Natalia spoke up about the choice to have Natalie work on the puzzle while Angelina, who figured it out early from the sidelines, sat out. So we know who Natalia is gunning for, but will John be able to protect Natalie from Natalia’s wrath?

8:36 p.m. — Back at Davids, Gabby was excited that she pulled through on the puzzle to earn immunity for her tribe. Meanwhile her biggest nemesis, Bi, was slightly injured and worried about whether it would heal so that she can continue to compete in the game.

8:37 p.m. — But on the Goliath beach, drama was already under way as Natalie approached Jeremy to save her from the vote. Jeremy wasn’t necessarily receptive to Natalie due to a conversation they had in the first episode that rubbed him the wrong way. Alison and Angelina discussed their options between Natalie and Jeremy, with Angelina arguing that Jeremy is working harder strategically and is a bigger threat to sway other players in the future.

8:40 p.m. — When Angelina approached Mike with the pitch to vote Jeremy out, he was frustrated that the tribe wasn’t going with the easy and agreed upon vote. Granted he wants to save an ally of his, but Natalia and Alec split with Angelina, determined to keep the vote on Natalie for what seemed like personal reasons.

8:41 p.m. — Elsewhere, Natalie and Jeremy hit a roadblock when she asked him to let her have a private conversation with Kara. That, obviously, alerted Jeremy to something fishy and so he refused to give her space to have conversations without her. Jeremy’s paranoia and Natalie’s confrontational episode took center stage for the remainder of the day as the Goliaths prepared to head to their first tribal.

8:49 p.m. — At a rainy tribal, Jeff Probst delayed the onset of drama by first asking the players to describe how they’re coping with the weather and the social dynamics of the tribe. Jeremy didn’t beat around the bush by immediately calling Natalie out as the outsider of the tribe, making it clear with rather personal jabs that her personality is hard to deal with. Natalie kept it relatively cool, but didn’t shy away from throwing punches right back at him. Ultimately, the rest of the tribe had a lot to say about Natalie’s failure to to make a good first impression among the group, piling up on who they at one point assumed was the easy vote for this tribal.

8:54 p.m. — Natalie rebounded really well by promising the tribe that if there’s a swap that she will remain Goliath strong while also pitching that she’ll take their comments about her as constructive criticism and try to be better with her delivery. With the stage set for a Jeremy vs. Natalie vote, the players cast their ballots and Jeff read them aloud (no one played an idol): Natalie, Jeremy, Jeremy, Jeremy, Jeremy, Jeremy, Jeremy. That clocked a majority, making Jeremy the first Goliath and third overall player voted out of the game!

8:56 p.m. — So it looks like at the end of the day Angelina was in fact able to rally the entire tribe to vote in unison against Jeremy. That’s a pretty solid bit of gameplay on her part and shows that she’s capable of manipulating the game to her own desires rather well. If she doesn’t become a threat because of it I might move her up in my predictions to win!

SEEJessica Peet (‘Survivor’ 37) exit interview: ‘I feel betrayed by Nick and Gabby’ after my blindside [PODCAST]

Here are the answers to Gold Derby’s contest questions for “Survivor” 37: Episode 3:

Who will be eliminated? Jeremy Crawford

Who will win Reward? Davids

Who will win Immunity? Davids