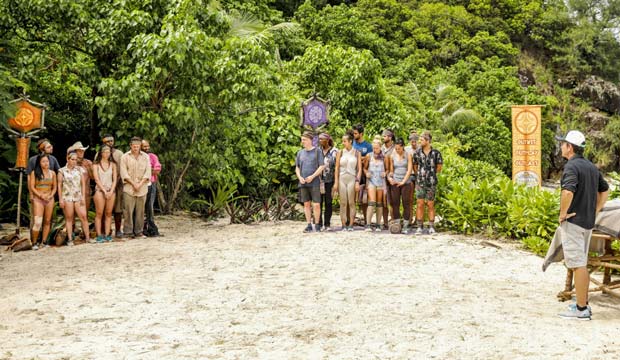 While the underdogs lost the first two immunity challenges on “Survivor: David vs. Goliath,” they rallied last week and forced the over-achievers to send home one of their own: Jeremy Crawford. But all of this talk of Davids versus Goliaths came to an end in the fourth episode, as host Jeff Probst told the remaining 17 players to all “drop their buffs” in the first tribe swap of Season 37. Which castaways used the mix-up to their advantage and who was eliminated in “Time to Bring About the Charmpocalypse”?

SEE‘Survivor’ medevacs: See all 15 medical evacuations through the years, from Michael Skupin to Pat Cusack

Below, check out our minute-by-minute “Survivor” recap of Season 37, Episode 4 to find out what happened Wednesday, October 17 at 8/7c. Then be sure to sound off in the comments section about your favorite castaways on CBS’s reality TV show, who annoys you the most, and who you think will ultimately join the “Survivor” winners list. Keep refreshing/reloading this live blog for the most recent updates.

8:00 p.m. — “Previously on ‘Survivor’!” During last week’s third episode, Jeremy got nervous when he saw groups of people having secret meetings without him. He then got in several arguments with Natalie Cole and spoiled the fact that Dan Rengering had a hidden immunity idol. All of that added together made Jeremy seem shifty to his Goliath tribe, so they voted him out in a 9-1 vote over Natalie. With the tribe swap tonight, old alliances will crumble while some outcasts will be given new playing fields. How will it all play out? Let’s go!

8:01 p.m. — As the players walk in to meet Jeff, Bi Nguyen announces to the rest of the players that she’s made the decision to leave the game due to her injured knee. Bi is the second David player to exit the game prematurely, putting them at a 7-9 disadvantage as the two tribes prepare for the first swap of the season on Day 10.

8:03 p.m. — With the selection of new buffs, the THREE tribes of FIVE are: Orange/Vuku – Natalia, Kara, Alec, Davie, Elizabeth; Purple/Jabini – Natalie, Mike, Angelina, Lyrsa, Nick; Green/Tiva – John, Dan, Alison, Christian, Gabby; and Carl, who drew a blank buff. Carl headed to exile island, set to replace the next eliminated player on whatever tribe loses immunity tonight. What’s noteworthy about the new tribes is that each one has three former Goliath members and two former David members, setting the Goliath players up for what should be easy majority votes going forward toward the merge. Oof!

8:06 p.m. — On the new Vuku tribe, Davie Rickenbacker immediately begins working Alec Merlino, knowing that he’s going to have to build some social relationships if he expects to stick around as a minority alliance player. Elizabeth Olson does the same by bonding with the women on her new tribe and by showing that she’s a hard worker. Unfortunately, Natalia Azoqa notices that Elizabeth and Kara Kay are bonding way too quickly and approaches Kara with that concern. Kara is weirded out by Natalia’s paranoia, something that probably bleeds over from last week when Natalia worked with Angelina to push the vote against Jeremy.

8:10 p.m. — On exile, Carl Boudreaux finds a note with a riddle to find a secret advantage hidden in a coconut floating in the water. There were a ton of decoy coconuts for him to sift through, but eventually he round the right one (with blue string on it), finding inside an idol nullifier. With that advantage he must secretly name someone at tribal council to nullify the possible use of an idol by that person.

8:16 p.m. — In our first look at the new Jabini tribe, Mike White is already forecasting that he and his tribe will be seeing tribal council many times in the coming weeks. Natalie Cole is back up to her cocky habits and lording over the tribe believing that she’s safe with the old Goliath having majority. It’s too bad for her that Angelina Keeley is a player that already wanted her gone before the swap. For Nick Wilson Natalie’s bossiness was music to his ears because it meant there was a possible crack in the Goliath majority and so he pulls Mike aside hoping that he can build some trust there. Mike eats it up and they form a mini-alliance with one another. I think they’re calling themselves “The Rockstars” and I’m not sure why LOL!

8:20 p.m. — Meanwhile on the Tiva tribe Christian Hubicki impresses Dan Rengering by being helpful, but not too confident. Christian calls that strategy the “charmpocalypse” and his quirkiness is a bridge to John Hennigan who feels a kinship with his weirdness. Gabby Pascuzzi feels left out once she notices Christian bonding with the guys and enters into her second fit of insecurity of the season, depending on Christian once again to build her up emotionally.

8:27 p.m. — For the first three-tribe immunity challenge the teams will select one person to be a caller as blindfolded members must navigate a cart through a maze. In addition to immunity for the first two tribes to finish, the first tribe to finish wins a reward of coffee and pastries. The callers for the tribe are Kara (Orange), Gabby (Green) and Angelina (Purple).

8:30 p.m. — The first tribe to make it through the first maze is Gabby’s and second is Kara’s, but Angelina’s is far behind temporarily getting stuck with Nick and Natalie pushing the cart. Gabby is the first to reach the final stage, a table maze that Christian and Alison Raybould must work through with blindfolds on.

8:32 p.m. — The purple tribe catches up to the table maze just as orange drops their ball out of the maze and must start over and Gabby’s green tribe finishes the maze earning immunity and reward! The start over is a major setback for orange, opening room for Angelina and her purple tribe to get close to the end and complete the maze in an amazing comeback! That means one of Kara, Natalia, Alec, Davie or Elizabeth will be going home tonight and Carl will replace them next week.

8:40 p.m. — After the challenge, Elizabeth was disheartened knowing she’s on the chopping block as one of only two former Davids for the Goliaths to choose from. She pulls Davie away from camp to look for an idol, but he knows that they won’t find it because he already has it. After searching, Davie runs to Natalia and Kara to tell them that Elizabeth mentioned voting Natalia out and how she was eager to find an idol. Meanwhile, Elizabeth gets some alone time with Alec and attempts to convince him to flip on the Goliaths knowing that eventually he’s going to have to. Smartly he points out to Elizabeth that if he flips this early it will send a message to the Goliaths on other tribes that he’s willing to flip again in the future.

8:43 p.m. — When Alec speaks with Natalia and Kara he’s put off by Natalia’s bossiness and gets the feeling that she doesn’t really trust him. Later, Natalia tries to bully Davie into voting their way in front of Alec, adding to the growing sense that she’s way too paranoid to keep around. So it’s looking like the vote is hinging on Alec’s decision to vote out Elizabeth with everyone else or work with Davie and Elizabeth (and likely Kara, too) to flip on Natalia instead.

8:50 p.m. — At tribal council Carl gets to listen in as his future tribe discusses the vote. The conversation starts with the obvious–that both Elizabeth and Davie are on the chopping block simply because of numbers. Davie makes the case that Elizabeth has a story that makes her a threat at the end as well as how he was blindside on the first vote and is less of a threat at the merge because he has less connections than Elizabeth on the other tribes. Elizabeth’s pitch is to push the big move, something that may inspire Alec to make a move against Natalia, which guessing by his uneasy body language is something he might be entertaining.

8:53 p.m. — And just like that, in a break of the conversation Alec gets up to whisper into Elizabeth’s ear which sets Natalia off. Once again she gets super paranoid and asks both Kara and Alec if they’re voting her out, but they say no. We’ll see!

8:55 p.m. — With no one (Davie) opting to play a hidden idol, Jeff reads the votes: Elizabeth, Davie, Natalia, Natalia, Natalia. He did it! Alec voted Natalia out and didn’t tell Kara! Oh wow, that is a crazy and horrible move. Carl is an original David member and now with Elizabeth and Davie they’ll have a majority in the tribe. That… is… a… shocker. I’m stunned at the stupidity. Alec, dude, what are you thinking?!

8:58 p.m. — Honestly now I can’t wait for next week when the tribes arrive at the challenge and the other Goliaths get their first look at Alec’s tribe to find that, somehow, it now has a David majority. Is it next Wednesday yet?!

SEE‘Survivor’ 37 deleted scene: ‘We are screwed!’ Mike complains after battling Jeremy over building the shelter [WATCH]

Here are the answers to Gold Derby’s contest questions for “Survivor” 37: Episode 4:

Who will be eliminated? Bi Nguyen and Natalia Azoqa

Who will win Reward? Tiva

Who will win Immunity? Tiva and Jabini

Will anybody quit or be medevaced? Yes