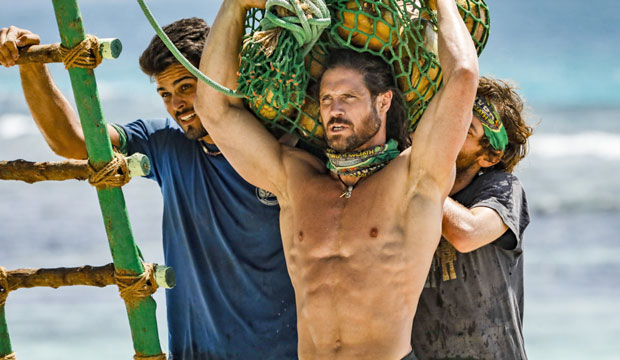 Following the elimination of controversial castaway Natalie Cole on last week’s “Survivor: David vs. Goliath,” there was no more drama on the island and everything was at peace. NOT! This being Halloween, “Survivor” aired one of its most dramatic (and “spine-chilling“) episodes of the season, as old alliances fell and new friendships were made. Were Gold Derby’s predictions accurate that either Angelina Keeley (7/4 odds), Kara Kay (9/2 odds) or Lyrsa Torres (11/2 odds) got the axe this week?

SEETop 13 most beloved ‘Survivor’ players ever: Our definitive rankings include Sandra, Cirie, Ozzy and …

Below, check out our minute-by-minute “Survivor” recap of Season 37, Episode 6, titled “Aren’t Brochachos Just Adorable?” to find out what happened Wednesday, October 31 at 8/7c. Then be sure to sound off in the comments section about your favorite castaways on CBS’s reality TV show, who annoys you the most, and who you think will ultimately join the “Survivor” winners list. Keep refreshing/reloading this live blog for the most recent updates.

8:00 p.m. — “Previously on ‘Survivor’!” During last week’s fifth episode Natalie’s old Goliath tribe member Mike White betrayed her when he instead sided with David teammates Lyrsa Torres and Nick Wilson. That now puts perpetually chilly Angelina out in the cold on her purple Jabeni tribe. Fans also fell in love with the island’s latest alliance, the Brochachos, composed of Christian Hubicki, John Hennigan and Dan Rengering of the green Tiva tribe. Here’s hoping all three Brochachos can survive tonight’s episode!

8:01 p.m. — While I continue to reel from Angelina begging for Natalie’s jacket, the Jabeni tribe returned to camp and Angelina admitted to only voting for Lyrsa in order to get the jacket. Lyrsa didn’t see that as a positive though, instead realizing that for Angelina the jacket was more important than the good of the tribe. Mike and Nick were Team Lyrsa on this one, but for Nick it was especially warming because it meant Angelina helped send another Goliath home and was pitting Mike further against another!

8:05 p.m. — For the night’s first challenge the three tribes assembled to compete for reward. In yet another obstacle course the tribes had to carry a heavy net of coconuts, climb a ladder, balance on a beam and hook rings via a toss. The prize for the first two tribes was a veggie kebob spread and cooking utensils. Vuku took the early lead as Lyrsa slowed Jabeni down into last place. When Alec Merlino got off to a failing start on the ring toss, Dan and Nick caught their respect tribes up to take the lead with two rings apiece for Vuku’s one. By the end, Dan had hooked all four of Tiva’s rings to take first place and Nick followed right behind for a second place comeback for Jabeni. Vuku, the early leaders, couldn’t bring it home.

8:11 p.m. — It’s important to note that when the tribes arrived at the challenge, all of the non-Jabeni former Goliaths did not look happy that yet another Goliath went home despite having the majority vote. Mike caught their looks and he told the camera that he took it as a sign that he shouldn’t vote Angelina out next because it would really put him at odds with all the former Goliaths at the point of another swap and/or the merge. So, oh, now he thinks of that? Hmm…

8:18 p.m. — The bromance wasn’t good news for an emotional Gabby Pascuzzi who tapped into Alison Raybould‘s capacity for empathy. Alison admitted that she was willing to vote against Dan in the event of a tribal council and instead work with both Gabby and Christian who she feels she can trust more. Remember that Alison is one of the players that is aware Dan already has one (she doesn’t know about the second) idol and so she knows how big of a threat he is.

8:20 p.m. — Over at Vuku, Carl Boudreaux was irritated by camp life decisions made by Elizabeth Olson, igniting a fight that led to Elizabeth confessing to the two types of people she hates: “lazy people and stupid people.” And when I say “fight” what I actually mean is that Elizabeth could not calm down until she addressed the conflict. The entire thing created a fracture in the Davids, creating a bit of hope for Kara who desperately needs that in order to stay in the tribe.

8:27 p.m. — For the immunity challenge Jeff Probst asked the castaways to transport water in a large stone saucer in order to fill a well at the end of an obstacle course and then solve a circular puzzle. The first two tribes to finish would win immunity and the last place tribe would go to tribal council to vote the next player out of the game.

8:29 p.m. — Once again Jabeni got off to a slow start and Tiva was the first tribe to the well with a big load of water that earned them the right to advance straight to the puzzle. Vuku only had to make two trips to the well to get their puzzle pieces, but Jabeni had such a difficult time transporting enough water that it took them a third trip! At that point Tiva was already closing in on their puzzle and quickly won first place for immunity! Not long after the Vuku tribe also finished their puzzle as Jabeni cramped and struggled to even continue the challenge. Sadly that meant the purple tribe would return to tribal council and one of Mike, Nick, Angelina or Lyrsa would be voted out.

8:40 p.m. — Of all the Jabeni members Mike seemed the most tormented by the idea of voting someone out, knowing that he was making a decision between sticking with the Goliaths and saving Angelina or voting with Nick and Lyrsa to take her out. Lyrsa made it clear to Angelina that she was going to stick with Nick and was willing to go to a tie, but that didn’t sit well with Angelina who used that as an opportunity to throw Lyrsa under the bus and threaten Nick with the possibility of “going to rocks.”

8:43 p.m. — When approached by Angelina, Nick also made it clear that he would not vote against Lyrsa mostly because he doesn’t trust her. After suggesting to Lyrsa that he wants to vote Angelina out, Mike met with Nick to discuss the pros and cons of which of the women to vote out. Ultimately Mike trusts Lyrsa in a way he doesn’t trust Angelina, but then he’s screwing over every other Goliath by once again lowering their overall numbers heading toward the merge.

8:50 p.m. — At tribal council Jeff asked the foursome about the clear bond they have already made, pointing out that Davids vs. Goliath isn’t necessarily an issue for this particular group. Lyrsa made it clear that “trust and loyalty” were at the top of her priorities, but Angelina added “strategy” to that–probably a bad move considering the other players already think she’s playing the strategy part of the game too hard. Angelina further put her foot in her mouth by being overly flattering to Nick, making it clear in the process that she was likely voting Lyrsa out. Still, heading into the vote, Mike seemed unsure of which direction he’d be going, but I can’t imagine he won’t be voting with Nick.

8:55 p.m. — As expected, Angelina and Lyrsa swapped votes for each other so it was unclear who the guys voted for until Jeff read the votes in full: Lyrsa, Angelina, Lyrsa, Lyrsa. That… is shocking. I thought for sure Nick would stick to his guns and convince Mike to take Angelina out! I guess Mike’s concern about voting another Goliath out was just too strong.

9:00 p.m. — OMG! In her goodbye message Lyrsa said that the most upsetting thing about being voted out is that she’ll have to sit next to Natalie at the reunion and join her at Ponderosa! Natalie’s impact is still felt a week after she was eliminated? Queen! What do you think of Lyrsa’s elimination? With the merge coming next week do you think Mike and Nick made the right decision? Sound off below in the comments!

SEE‘Survivor’ Jacketgate: Natalie got the boot, but what other fallout will there be? [POLL]

Here are the answers to Gold Derby’s contest questions for “Survivor” 37: Episode 6:

Who will win Reward? Tiva and Jabeni

Who will win Immunity? Tiva and Vuku