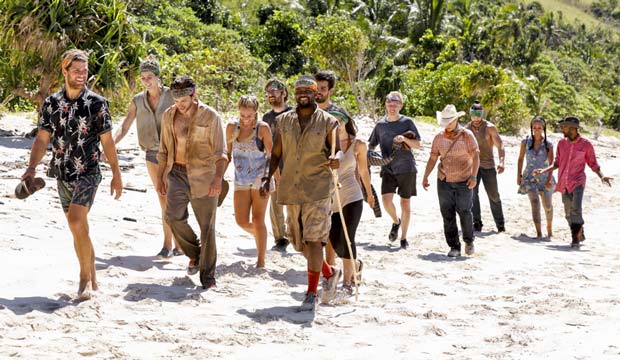 The highly anticipated merge finally arrived in “Survivor: David vs. Goliath” on Wednesday night, with the underdog tribe at a slight 6-7 disadvantage over the herculean tribe. However, in recent weeks we’ve seen alliances formed with both Davids and Goliaths — including “rock stars” Nick Wilson and Mike White and “brochachos” Christian Hubicki, John Hennigan and Dan Rengering — suggesting old tribal lines may not be as important going forward. Which castaway fell victim to the merge and became the first member of the jury?

Below, check out our minute-by-minute “Survivor” recap of Season 37, Episode 7, titled “There’s Gonna Be Tears Shed” to find out what happened Wednesday, November 7 at 8/7c. Then be sure to sound off in the comments section about your favorite castaways on CBS’s reality TV show, who annoys you the most, and who you think will ultimately join the “Survivor” winners list. Keep refreshing/reloading this live blog for the most recent updates.

8:00 p.m. — “Previously on ‘Survivor’!” During last week’s sixth episode, Lyrsa Torres was unanimously eliminated by her purple Jabeni tribe after Mike decided that he wanted to have a numbers advantage heading into the merge. Over on the orange Vuku tribe Elizabeth Olson rubbed Davie Rickenbacker the wrong way, while at the green Tiva camp Gabby Pascuzzi tried to convince Alison Raybould to turn on Dan. How will all of these alliances and friendships be affected by tonight’s merge? Let’s find out!

8:01 p.m. — News of the merge came quickly the morning after tribal council when the players from Vuku and Jabei arrived at the Tiva beach by boat. During the merge feast Carl Boudreaux was already setting his sights on turning on another David member by confessing to the audience he’s sick of Elizabeth and would love to vote her out. Oppositely, despite building a bond with Christian after the tribe switch John was under the impression players would stick to original tribal lines and it would return to Davids vs. Goliaths.

8:04 p.m. — One of the main topics among everyone was how the Goliaths went about voting out members of their own tribe while having the majority on the three tribes. Carl told Angelina Keeley that Alec Merlino orchestrated the blindside against Natalia Azoqa at Vuku, who spread the news to John and Alison. Later, a drunk Carl suggests to Dan that he’s willing to take out Elizabeth first because he just doesn’t like her.

8:06 p.m. — Elsewhere, the Mason-Dixons Christian and Nick meet up to share the intelligence they gained from their time apart, during which Nick tells Christian that Dan likely has an idol. Speaking of Dan, he reunites with his boo from the first couple of days, Kara Kay. During their meeting, Dan confessed that he found a second idol, a secret he originally wanted to keep to himself. Ugh, bad move buddy!

8:08 p.m. — Angelina, Alec and John meet up with Kara and Dan to discuss their options knowing that they have the majority. The thing is, they all pretended to be on the same page, but they very much weren’t. Angelina wants to get Christian out, but John wants to protect Christian. And Alec is setting himself up to work with the Davids instead of the Goliaths. This might actually shape up to be one of the most tumultuous merges in recent memory! Drool.

8:13 p.m. — At night, Elizabeth was kept up by Dan and Kara who were whispering “for hours,” clueing her in to the fact that they’re a tight pair and regardless of if there’s a romantic connection or not they’re likely voting together and that makes them dangerous. The next morning, Mike made his rounds to see who he still vibes with and who he plans to work with going forward. His goal was to develop a “solid six” consisting of Alec, Alison, Christian, Gabby and Nick. That’s an interesting group that I wasn’t expecting!

8:17 p.m. — Elizabeth took advantage of some time alone with Nick and Carl to disclose what she learned about Dan and Kara the night before. Down a number against the Goliaths, she knew that the Davids would have to pick up a number in order to make a move against Dan so she chose Alec. In his conversation with her, Alec feigned hesitation at making a move against the Goliaths, but he also knows that he should play “double-agent” as long as possible so he went to Kara and Dan to throw Elizabeth under the bus. Obviously Dan did not like that and started to freak out.

8:23 p.m. — For the first individual immunity challenge of the season, Jeff Probst asked the survivors to swing a pendulum through a frame and around a statue. If the pendulum hits the frame it would knock the statue over and the player would be eliminated–last one standing wins immunity. In order, the first set of players to drop out were: Mike, Christian, Carl, Gabby, Kara and Nick who all dropped within the first 15 minutes. After that quarter of an hour passed they had to switch hands swinging the pendulum without losing their momentum. In that transition both Angelina, Alec and Davie fell out leaving John, Elizabeth, Alison and Dan. John was the first to drop when he stepped off her perch, followed by Dan who hit his frame too hard and dropped his statue. Between Alison and Elizabeth for immunity, Alison managed to hang on longer than Elizabeth who sadly probably didn’t know that she needed that win badly!

8:35 p.m. — After the challenge the Goliaths caucused on the beach, beginning with Angelina protecting Elizabeth by saying she isn’t a threat but Christian would be a better vote. Unbeknownst to her, Christian is working in secret with a handful of the Goliaths and so her idea was met with blank stares that I don’t think she was necessarily reading correctly. Dan and John were two Goliaths that were torn about Angelina’s plan because of their Brochacho alliance with him.

8:38 p.m. — Knowing that she’s likely protected in the future, Gabby was originally down to sacrifice Elizabeth to the Goliaths, but in her heart she didn’t like the idea of the Davids allowing the Goliaths to dictate the course of the game. Meanwhile, Alec and Alison were deconstructing Angelina’s plan which rubbed them both the wrong way because they knew it was in their best interest to maintain trust with Christian, Nick and Gabby. When John and Dan approached them, they told Alec and Alison that they still want Elizabeth out, preparing together to butt heads with Angelina to force her to take out Elizabeth with them.

8:40 p.m. — John and Alison pulled Angelina aside to tell her of the plan, but she got pissed about the way Dan was forcing the issue which made her feel uncomfortable within the group. Like some of the players who fell before her, Angelina lost her cool and began overthinking and overplaying her hand. Then, right on cue, she pulled Elizabeth aside to tell her that the Goliaths want to vote her out. Whhhhhaaaaaat are you doing Angelina?!

8:43 p.m. — Elizabeth told Carl and Gabby about Angelina’s news, to which Gabby had the brilliant plan of informing the other Goliaths at tribal council about what Angelina did in order to throw her under the bus and hope that they vote Angelina out instead. Whew! This is going to be a “live” tribal, as they say.

8:49 p.m. — When asked if it would still be David vs. Goliath, both Alec and Angelina took long pauses that suggested they might be considering breaking apart. To that, Elizabeth took the opportunity to tell everyone that Angelina told her their group would be voting her out. To defend herself, Angelina admitted to it by asking Elizabeth why she would do that. All of the Goliaths jumped down Angelina’s throat, notably Alison who said it sounds like Angelina was already working on her potential jury vote with Elizabeth. With that, the back row of tribal started getting in each other’s ears to secretly discuss what their move should be.

9:00 p.m. — So after all that, it looks like the plan was set in stone to sacrifice Elizabeth and there’s nothing she could have done to spare herself. It was a risky move holding the information she had about Angelina’s betrayal until tribal. Do y’all think it would have worked out better if she had told Goliaths about it before tribal? I do. Regardless, I doubt Angelina has much game life left in her now that no one is going to trust her. Overall, what a great and very messy (!!) merge episode. I feel like we haven’t had one like that since Chaos Kass was around! This is the Survivor we love.

SEE‘Survivor’ 37 power rankings: Will next week’s merge bring about a Mason-Dixon/Rockstars/Brochacho super alliance?

Here are the answers to Gold Derby’s contest questions for “Survivor” 37: Episode 7:

Who will be eliminated? Elizabeth Olson

Who will win Immunity? Alison Raybould