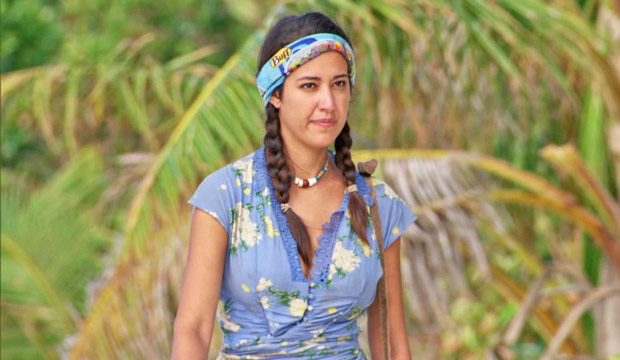 Despite having a seven-to-five numbers advantage, the former Goliath tribe members in “Survivor: David vs. Goliath” had an Achilles heel on their team named Angelina Keeley. Heading into Wednesday’s post-merge episode Angelina had a huge target on her back after Elizabeth Olson spilled the beans at tribal council that Angelina told her she was going home. Did Angelina manage to survive the Goliaths’ rage, or was she voted out as our racetrack odds predicted?

Below, check out our minute-by-minute “Survivor” recap of Season 37, Episode 8, titled “You Get What You Give,” to find out what happened Wednesday, November 14 at 8/7c. Then be sure to sound off in the comments section about your favorite castaways on CBS’s reality TV show, who annoys you the most, and who you think will ultimately join the “Survivor” winners list. Keep refreshing/reloading this live blog for the most recent updates.

SEE‘Survivor’ 37 deleted scene: Dan and John are ‘pissed’ they’re building the merge shelter all by themselves [WATCH]

8:00 p.m. — “Previously on ‘Survivor’!” During last week’s seventh episode, the merge finally arrived with the Davids and Goliaths coming together as the new Kalokalo tribe. While some old alliances crumbled, a “Strike Force” group was created consisting of three Davids (Christian Hubicki, Nick Wilson, Gabby Pascuzzi) and three Goliaths (Alison Raybould, Mike White, Alec Merlino). Will “Strike Force” decide to eliminate Angelina, or might they go after a bigger target? Let’s find out!

8:01 p.m. — Following Kalokalo’s first tribal, Angelina was in full-on damage control mode. While looking to mend fences, Angelina wanted to convince everyone that her and Elizabeth met by chance and it was a mistake, not strategy. Unfortunately for her, no one bought it and everyone is still certain that she made the move as “jury management.”

8:04 p.m. — Christian and Mike met on the beach to discuss the Strike Force alliance where Mike brought up his concerns about Gabby after she fell apart yet again at the tribal council. Christian was put off by Mike’s hesitation to believe Gabby and took note of it in case it could be used against him later.

8:05 p.m. — Elsewhere, Davie Rickenbacker and Nick went hunting for an idol and instead found a clue with what Nick recognized as the same insignia that was on the merge feast chest. The insignia had a palm tree coming out of a cliff which the two of them found later on. Because everyone else was on the beach, Nick and Carl Boudreaux went to search around the tree while Davie created a diversion (by doing yoga on the beach). Sure enough Nick and Carl found what turned out to be another advantage–the steal the vote advantage. The discovery prompted Carl to tell Nick and Davie about his idol nullifier, but Davie kept news of his own idol to himself.

8:08 p.m. — At the reward challenge the player were divided into two teams of six for an endurance challenge involving them holding up eight 10-pound sandbags attached to a trough above them. If one bag drops too low the trough will dump on them and they’ll lose. The team to hold the trough up longest won a pizza picnic. The two teams were decided by schoolyard pick: Gabby chose Christian, Alison, John, Alec and Nick; Mike chose Carl, Kara, Davie, Dan and Angelina.

8:11 p.m. — After 15 minutes each team got to elect one player to drop out, meaning their bag had to be passed to another player. Both Angelina and Gabby were the first to drop out. After another 15 minutes, Christian and Carl dropped out, creating a situation where the 80 pounds were distributed among four players on each team. At one point Kara Kay was holding three bags, as was Dan Rengering who had three bags in one hand! But just like that, while taunting the other team, one of his three bags dropped from his stack and dumped water over his team. That means the winners were Nick, Gabby, Christian, Alison, Alec and John!

8:19 p.m. — The challenge winners got to enjoy their pizza, breadsticks and soda right in front of the losers at camp. Respectfully they took their picnic elsewhere as to not throw it in the face of the others. As one of the losers, Mike took the opportunity with less people at camp to take a walk on his own to do some thinking. With his worry within the Strike Force alliance persisting, Mike talked to Alec about the option of voting Christian out, assuming that he’s the one among the Davids that will turn on the alliance and can assemble the others against the Goliaths. Alec, however, is still in the mindset that remaining Goliath-strong is a bad move for himself.

8:22 p.m. — Later, all of the Goliaths caucused on the beach to agree to vote Christian out, much to Angelina’s anger since she was the one that wanted to vote him out last week. But in order to make it a blindside, Angelina had to agree to be the “decoy” vote, meaning everyone would tell Christian and the other Davids that they were agreeing to vote Angelina out. Sounds like a great plan, but now Angelina is in a vulnerable spot (dramatic overreaction incoming!) and Alec is still iffy about his allegiance to the Goliaths (flip flopper confirmed!). I think we’re being set up for another epically disastrous tribal council. Yass!

8:27 p.m. — At the immunity challenge the players had to balance on a narrow perch while holding a buoy between two sticks. Last one standing wins immunity. Kara was the first to drop within seconds of the challenge starting, followed by Christian, Alison, Davie, John, Gabby and Carl all in quick succession. The last five standing were Alec, Mike, Angelina, Dan and Nick. And then just like that Alec dropped, then Mike and Nick shortly after. Between Angelina and Dan for the win both began to wobble a bit, but after a ball slip Angelina dropped and left Dan as the second individual immunity winner!

8:36 p.m. — Back at camp, the Goliaths played up their plan to act like they’re voting Angelina out. Even John Hennigan, one of Christian’s Brochacho allies, was on board to take out Christian in a blindside. Angelina was not okay being the decoy target, knowing that if the Davids used an idol that she’d have the votes against her to be sent home.

8:39 p.m. — Not wanting to lose Nick’s trust, Alec confessed to him of the plan to blindside Christian. With that information, Nick spoke to Christian and said that he thinks the Goliaths are lying in order to put him and the other Davids on alert. Knowing that Davie is in possession of advantages, Nick approached him with a plan to use them in order to save Christian. With the vote steal, Nick and/or Davie could force a 6-6 tie at tribal and put the Goliaths in a position to either sacrifice Angelina or risk their own games to go to a rock draw. Sounds like a solid plan. How will it pan out?

8:47 p.m. — At tribal, Angelina explained that she was remaining Goliath-strong and had apologized to the tribe for her mistake with Elizabeth in the prior vote. Christian told Jeff that Davids were instrumental in the previous vote and would be instrumental again this vote, but Carl wasn’t buying it, knowing that Goliaths have the numbers and no reason or need to use the Davids. Angelina wasn’t shy about reinforcing Christian’s assessment that he might have made himself a threat in the game, which made it clear that the vote was probably coming down to the two of them.

Here are the answers to Gold Derby’s contest questions for “Survivor” 37: Episode 8:

Who will be eliminated? John Hennigan

Who will win Immunity? Dan Rengering