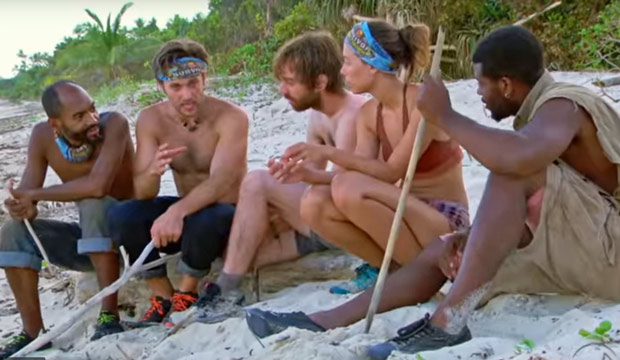 Heading into Wednesday’s all-new episode of “Survivor: David vs. Goliath,” the preview trailer hinted that the five remaining David tribe members — Carl Boudreaux, Nick Wilson, Christian Hubicki, Gabby Pascuzzi and Davie Rickenbacker — might use their advantages to slay one of the six Goliaths. Did Carl end up playing his idol nullifier and/or did Nick steal another person’s vote? And did the showmance between Dan Rengering and Kara Kay survive all the juicy drama?

Below, check out our minute-by-minute “Survivor” recap of Season 37, Episode 9, titled “Breadth-First Search,” to find out what happened Wednesday, November 21 at 8/7c. Then be sure to sound off in the comments section about your favorite castaways on CBS’s reality TV show, who annoys you the most, and who you think will ultimately join the “Survivor” winners list. Keep refreshing/reloading this live blog for the most recent updates.

8:00 p.m. — “Previously on ‘Survivor’!” During last week’s eighth episode Angelina Keeley found herself at the center of drama yet again, although this time no jackets were involved. Instead, Angelina begged and pleaded for Dan to use his hidden idol to save her after their plan of blindsiding Christian was thwarted when Davie played his own idol. Dan finally agreed to save Angelina, but it was all for naught since it was actually John Hennigan who earned the second-most number of votes after Christian. Only 11 players remain on the island. Who will be voted out tonight?

8:01 p.m. — After last week’s tribal council, Kara, Alison Raybould and Alec Merlino were worried about the big moves that the Davids were continuing to put together week after week and wondering where in the game they’d get a chance to make a move of their own. Their consensus is that they’ve remained “Goliath strong” too long while elsewhere Dan feels left out, noticing that the three of them are talking together and clearly leaving him out of it.

8:05 p.m. — For the reward challenge the players were once again divided into teams of five to run an obstacle course that ended with a snake puzzle. The teams competed for a lunch at a burger and beer bar. In random draw the purple team was Angelina, Christian, Alison, Gabby and Nick and orange was Mike, Davie, Dan, Alec and Kara with Carl being left out with no shot to win reward.

8:08 p.m. — Orange was the first team to get to a combination lock puzzle with Mike taking the lead there and Christian taking the lead on the lock for purple. Mike got the lock opened first, but after not covering his answer Alison was able to convey the correct answer to Christian who quickly unlocked theirs as well. Christian and Alison then jumped on the snake puzzle as Alec and Kara were already assembling their own.

8:11 p.m. — Though purple managed to catch up to orange on the puzzle, Alec and Kara got it together quickly at the end and won reward for their team!

8:15 p.m. — Because they lost reward with most of the Davids, Angelina and Alison were up for grabs as options to pull over to their side against the Goliaths. Gabby used her prior bond with Alison to her advantage in a conversation they had about Alison’s need to make a big move in the game. The option for her to ponder over is whether or not she’s ready to take out Dan along with the Davids at the next tribal council.

8:18 p.m. — On the reward Mike White got Alec, Dan and Kara together to solidify a “Goliath strong” plan in order to vote Christian out again since they continue to see him as the biggest threat in the game. Kara, however, was still concerned about Dan dragging down her personal game so she pulled Alec and Alison in again later and told them about his second idol with the idea that they’d be blindsiding him as soon as they get the chance.

8:23 p.m. — Knowing show history, Davie lead the Davids in an early morning search to find an idol assuming that the one he played would be hidden again at camp. By breakfast time no one had found one, but that didn’t stop Christian from continuing the search. In one tree he found blue yarn wrapped around a husk and sure enough it had an idol inside!

8:26 p.m. — At the immunity challenge they players had to balance balls on a disc while crossing a balance beam. After the beam they had to maneuver the ball along a snake-shaped track into a hole at the end. First one to do that with three balls would win safety at the night’s tribal council.

8:28 p.m. — Alec and Dan got their balls across the beam first, leaving everyone else far behind as they started on the snake track. Dan got a ball in first, but Alec struggled to get his second after getting his first. Meanwhile Carl, Kara and Angelina all caught up and got their first balls in as well. Alec then took the lead to get his second ball in and before anyone else could catch up to him he got his third and won immunity!

8:36 p.m. — Ahead of tribal council, Kara prepared for her move against Dan with a plan to split votes with the Davids in order to take him out. Alison got worried that the Davids accepted Kara’s plan too easily and it made her feel like it would be the wrong move to take out the Goliaths. She met with Alec to discuss it and he agreed that from a numbers standpoint it is in their best interest to not give the Davids the advantage. They approached Kara with the idea that they have to take out Christian (not Dan), but in her head she still wanted Dan out.

8:39 p.m. — Later the Davids noticed that the Goliaths were staying together all day long and so they got nervous about the plan Kara came to them with. That worry prompted them to have a session of their own where Nick confessed to having the vote steal, Christian confessed to having an idol and Carl confessed to having his idol nullifier. In order to make their move they discussed which advantage would be best to use and when.

8:46 p.m. — At tribal Alison told Jeff that the previous tribal council was her “wake up call” to finally start playing the game harder. Gabby was in better spirits than she has been in the past, throwing it in the Goliaths face a little bit that they got a taste of their own medicine for once. Dan spoke about it best, and everyone pretty much agreed, that the game was back to David vs. Goliath and that both sides would should be sticking together in their own best interests.

8:49 p.m. — The Davids made the strong case that they proved their willingness to work across tribal lines when they voted out Elizabeth, but the Goliaths failed to live up to their side of it when everyone was supposed to agree to vote out Angelina. They made it clear that last week the Goliaths forced their hand that the Davids would have to play their own game without them.

8:51 p.m. — Before it became time to vote, Nick brought out his secret advantage to steal a vote from another player. He chose to steal Alison’s vote to which she replied “Ooh, I didn’t expect that.” saying that he was depriving her of the opportunity to prove her trust. Obviously shook by the advantage, Alison, Alec and Kara all nodded heads at each other as if they were agreeing to vote the same way. While others were voting, Dan leaned in to Kara and asked him if he should play his idol or if he should use it on Alison. We didn’t get to see her answer, but she did whisper back.

9:00 p.m. — Turns out that the two votes for Angelina came from Kara and Alec who in the preview for the next episode have to answer to Angelina’s wrath. Will they be able to get in with the Davids with that move? And how will Kara turning on Dan sit with the Goliaths on the jury? Sound off in the comments and reality forums about these questions and more before next week’s episode!

Here are the answers to Gold Derby’s contest questions for “Survivor” 37: Episode 9:

Who will be eliminated? Dan Rengering

Who will win Immunity? Alec Merlino