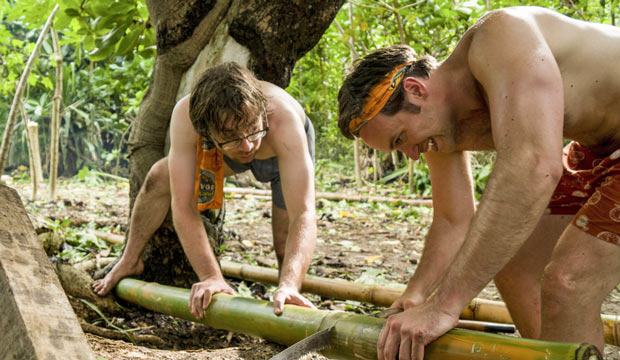 Wednesday’s merge episode of “Survivor: David vs. Goliath” was officially one for the books as it featured new strategies, alliance double-dealing, backstabbing, gossip-spreading and a whole lot of drool-inducing messiness. And yet amidst all of the back and forth, the newly merged Kalokalo tribe came together to unanimously oust Elizabeth Olson. But before she went, Elizabeth was sure to throw Angelina Keeley‘s shadiness under the bus to her fellow Goliaths. How will they react to Angelina the morning after or how will it play into the hands of our newest super alliance, “Strike Force,” headed by Angelina’s target Christian Hubicki and his closest ally Nick Wilson?

In this week’s power rankings I maintain that Christian and Nick are still the two most powerful players in the game and likeliest to make it to the final. Below I’ve ranked the top 12 with my assessments on the shelf life of “Strike Force,” the questionable edits of some players in the middle and express my incredible joy at Angelina’s legendary but disastrous game play.

SEEWill Angelina’s ‘Survivor’ mistake come back to haunt her? ‘I wasn’t trying to be sneaky!’ [POLL]

Without a doubt the biggest shake up this week was the emergence of the “Strike Force” alliance, dubbed so by Christian who referred to Alec’s willingness to take strikes against his Goliath teammates so quickly as a force. The evenly split David/Goliath alliance brings together the Mason-Dixon paired Christian and Nick, the non-Brochacho women of the Tiva tribe Alison and Gabby, and Nick’s Jabeni ally Mike as well as the lone Vuku member Alec who they all recognized as a Goliath ready and willing to make a power move. With that many variables at play, how the alliance breaks down in terms of leadership is yet to be determined so all we have to go on really is the individual edits.

Alison made a huge boost in my rankings this week because of a highly favorable edit in the episode. She was a driving force in most of the decision-making while her Goliath counterparts Mike took a backseat and Alec remained overly aggressive in his style. Alison’s biggest strength is that she manages to get her voice heard without demanding attention so she’s able to slide under the radar within the alliance. It also helps that she’s brought Gabby under her wing, making her feel heard and appreciated which is basically all Gabby seems to want out of the game. Mike’s problem is that he now seems like he’s just riding the wave as long as possible and Alec is destined to be turned on the first chance Strike Force gets to turn on itself.

Christian and Nick however continue to keep their cards close to their chest and have managed, I think, to remain a strong pair without being entirely detected by everyone else. It doesn’t hurt their case that John, Dan and Mike have unwittingly become their solider-minions dead set on protecting them against Angelina’s attacks. Christian looks like he might continue to take some heat in the coming weeks, but I expect him to survive those and remain the narrative voice of the season, editorially speaking.

SEEMike White made a huge mistake on ‘Survivor’ by keeping Angelina over Lyrsa, say 56% of readers [POLL RESULTS]

This group of Goliaths is becoming increasingly hard for me to read. John is still a major player in the decision making around camp, but him not being included in the Strike Force alliance seems like an early death sentence. Dan is working closely with John, but took a ton of heat this week for his relationship with Kara and even nose-dived in the edit department by coming across as bratty, paranoid and defensive. Ultimately, I can’t help but think (and honestly dream of) an eventual blindside where Dan goes home with both idols in his pocket and unused. I do think that Kara will outlast Dan, no matter how his idol play shakes out, but without him in the game she doesn’t seem to have established enough ties with anyone else to have many places to turn. John will outlast them both, perhaps through an immunity challenge streak, but more likely because of protection from Christian as a possible side alliance in case he needs numbers to turn on Strike Force earlier than expected.

It’s surprising that two players holding two advantages can have such terrible edits at this point in the game and yet here we are. Carl made a name for himself at the merge by a) getting drunk and then b) spreading word around camp that Alec was behind the Goliath mutiny at Vuku. That gossip, I think, was intended to throw Alec under the bus, but instead it pushed him into the good graces of Christian who, oddly enough, only Angelina recognizes as the major threat that he is. Davie, on the other hand, was almost entirely invisible from the merge episode, suggesting that he’s basically a non-factor in how the rest of the game, strategically-speaking, plays out. Both are looking like final 7 or 8 boots where the only reason they’re voted out is because they’re the last ones standing against the wall of a loyal alliance they’re not in. No telling how, or even if, their advantages will play out to their benefit (my guess is they both flop on their uses of them).

Where do we even start with Miss Angelina? Between #Jacketgate, which I am still obsessed with btw, and the belief that she’s already working on jury votes, Angelina has rustled so many feathers on both sides of the fence that she has likely found herself without allies to work with. Though she may survive a few more episodes–honestly, no one this messy is ever going to be a threat to win–Angelina’s time in the game now has an expiration date. As viewers, all we can hope for is that they keep her around long enough for her to deliver a few more iconic moments to secure her a spot in a future season so we can enjoy her disastrous social skills all over again.