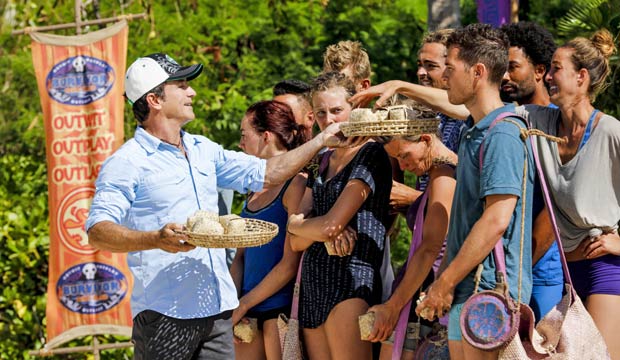 Who was voted out in Wednesday’s sixth episode of CBS’s “Survivor: Ghost Island”? Prior to the episode airing, Gold Derby’s exclusive odds predicted that Malolo’s Bradley Kleihege would be eliminated following the season’s second tribe swap. However, Jeff Probst‘s tease that there’d be a “brand new start to Ghost Island” was sure to shake up the game. So did our “Survivor” predictions come true this week?

Below, check out our minute-by-minute “Survivor: Ghost Island” recap of Season 36, Episode 6, titled “Fate is the Homie,” to find out what happened Wednesday, March 28. Then be sure to sound off in the comments section about your favorite castaway, who annoys you the most, and who you think can go the distance to join the “Survivor” winners list. Keep refreshing/reloading this page as we’ll be updating live.

7:59 p.m. – “Previously on ‘Survivor’!” During last week’s fifth episode, Stephanie Johnson was eliminated by a unanimous vote after spending a day at Ghost Island. Stephanie’s biggest fears came true, that her absence would mean she’d be excluded from discussions and she’d be voted out. Luckily for the other two outnumbered players on her tribe — Michael Yerger and Jenna Bowman — tonight’s second tribe swap can only bring good news.

8:01 p.m. – It’s Day 15 in the game and right away tonight we’re getting the second tribe swap of the season and it’s from two tribes to three tribes! Chosen at random, the new Naviti tribe is: Domenick, Bradley, Donathan, Libby and Chelsea; and the new Malolo tribe is: Michael, Kellyn, James, Desiree and Angela; and the brand new green tribe Yanuya is: Sebastian, Jenna, Wendell, Laurel and Chris.

8:06 p.m. – On the new Yanuya beach, Wendell Holland is happy about the swap because he’s no longer caught in the middle of Chris Noble and Domenick Abbate. He’s also reunited with Sebastian Noel, who is drawn in by Wendell’s sentimental gesture of brining him a shell he had found, who we think is a fledgling alliance with Jenna from the previous tribe. In meeting for the first time, Laurel Johnson finds a little tension with Chris and looks ahead to possibly voting him out if they lose immunity.

8:14 p.m. – Over at Malolo, Desiree Afuye feels defeated by another swap, but she’s one of three original-original Naviti with Angela Perkins and Kellyn Bechtold. Unfortunately, the news comes out that Angela got stabbed in the back by Wendell and Domenick so there’s a crack for Michael and James Lim, original Malolo, to pull her in.

8:17 p.m. – And checking in at the Naviti camp, Bradley is back with Chelsea Townsend and Domenick so he’s feeling at ease. But yet again, the feud between Domenick and Chris is the conversation topic–at this tribe, Domenick is happy to be away from him. That being said, Libby Vincek is already on Domenick’s radar because he thinks she’s playing a seductive, flirtatious game that worries him.

8:24 p.m. – For tonight’s immunity challenge the three tribes will compete in a seasonal favorite, the blindfolded search. One member of each tribe will act as the caller to to help the blindfolded members to retrieve puzzle pieces across an open, but hazardous field. Then the two tribes that finish the puzzles first will earn immunity, with the losing tribe heading to council later.

8:26 p.m. – The callers for the tribes are Wendell (Yanuya), Domenick (Naviti) and Desiree (Malolo). In a huge blunder, Chelsea unties a Malolo bag instead of her own Naviti bag, a huge boost for Michael who rightfully takes it from her.

8:29 p.m. – Malolo is the first tribe to collect all of their puzzle pieces and first to begin the puzzle with Desiree still guiding the blindfolded Kellyn and Angela to put the puzzle together. While that happens, both of the other tribes finish collecting and get to the puzzles, but Yanuya left one of their bags at the start and has to go back to collect it. Luckily, despite a huge lead, Malolo struggles to get a handle over the puzzle.

8:32 p.m. – After being last to start the puzzle, miraculously Yanuya mounts a huge comeback and finishes their puzzle first, earning immunity! And shortly after Naviti pulls it together quickly and overtakes Malolo to win the second immunity. That means the new Malolo tribe of Desiree, James, Michael, Kellyn and Angela will go to tribal council and one of them will be voted out of the game.

8:39 p.m. – After the immunity challenge, Desiree feels guilty and is clearly upset, crying at camp and in her confessionals for flopping in her chance to prove herself to her tribe. But the story here is that Angela is caught between her original tribe (that turned on her) and players she didn’t start the game with. One side (Desiree and Kellyn) want to vote out James and one side (James and Michael) want to vote out Desiree. Angela’s decision appears to be coming down to her desire to remain loyal to original Naviti and her personal connection with James.

8:49 p.m. – Jeff, kindly, begins this week’s tribal by telling Malolo that challenge-wise they’re one of the worst tribes. So mean! But it’s true, and that leads right in to Desiree taking blame for the immunity loss and offers her an opportunity to promise to make up for it in the future. Talk also circles around speculation of an upcoming merge and whether or not strength or loyalty is important to keep around.

8:55 p.m. – There is no immunity idol played tonight, so Jeff reads the votes: James, Desiree, James, James. Whoa is sounds like all four members voted James out, including Michael, who James gives a very nasty look to on his way out! That is a… surprise. He was a great player!

9:00 p.m. – With the elimination of James, that’s five original Malolo eliminations in only six tribal councils. It would seem the strength of original Naviti is holding really strong, but eventually they’re going to have to turn on each other. Will it happen next week? We’ll have to wait to see.

Here are the answers to Gold Derby’s contest questions for “Survivor” Season 36, Episode 6:

Who will be eliminated? James Lim

Who will win Immunity? Naviti and Yanuya

Who will go to Ghost Island? No one

'Survivor 42' sneak peek video: Maryanne still having 'so much fun' despite her toenail falling off…

'Survivor 42': Did 'puppet' master Hai Giang deserve to be voted out in episode 10…