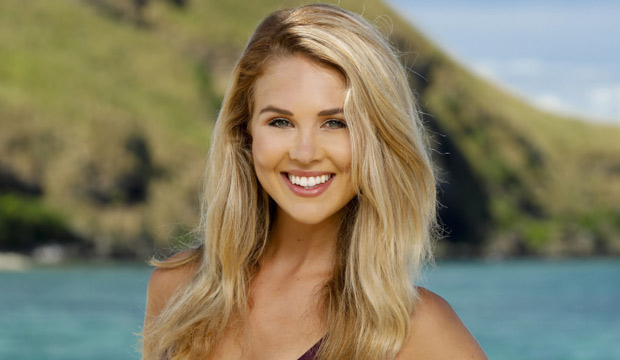 Who was voted out in Wednesday’s ninth episode of CBS’s “Survivor: Ghost Island”? Heading into the anticipated food challenge episode, Gold Derby’s readers predicted that Libby Vincek would be eliminated after receiving two votes last week, from Angela Perkins and Desiree Afuye. Libby is a social threat who’s been compared to former winner Parvati Shallow, so did her fellow tribe mates decide to oust her now while they still had the numbers?

Below, check out our minute-by-minute “Survivor: Ghost Island” recap of Season 36, Episode 9, titled “The Sea Slug Slugger,” to find out what happened Wednesday, April 18. Then be sure to sound off in the comments section about your favorite castaway, who annoys you the most, and who you think can go the distance to join the “Survivor” winners list. Keep refreshing/reloading this page as we’ll be updating live.

7:59 p.m. – “Previously on ‘Survivor’!” During last week’s eighth episode the feud between Chris Noble and Domenick Abbate came to an end when Chris was voted out with a hidden immunity idol in his pocket. Kellyn Bechtold won the first individual immunity challenge, which makes her even more of a threat heading into the second half of the season. Who will join Chris as the second member of the jury? Let’s find out!

8:00 p.m. – After tribal, Libby was concerned that she received two votes and couldn’t figure out where they came from. Her response was to pay more attention to the game and to do what she can to stay off of people’s radars. Domenick is equally concerned that he’s a threat, perhaps because he came off as cocky in his war against Chris. His reaction is to pull back and not “call the shots” for the next few tribals.

8:02 p.m. – The next day Wendell Holland offers up that he wants to stay true to his secret foursome alliance with Domenick, Laurel Johnson and Donathan Hurley. In order to secure her trust he decides to disclose to her that he also has an idol, but she’s a little miffed because it took him so long to tell her. And she’s right! He should have told her much sooner if he wanted to maintain her trust. Instead, he waited too long and now she justifiably feels like it’s too easy for him to keep things from her.

8:05 p.m. – For tonight’s reward challenge the 12 are divided into two teams of six tasked with a small course before knocking down targets with a bean bag slingshot. Up for grabs is an afternoon of tacos, burritos, quesadillas and margaritas. Additionally, the winning team will get to send someone from the losing side to go to ghost island.

8:07 p.m. – Wendell and Domenick are first out on the course for their teams and both knock down a target on their first attempt. Following Wendell on the purple team is Laurel and she hits her target as well, putting them in the lead–Donathan however struggles and heads back without knocking over a target.

8:09 p.m. – Michael Yerger manages to knock a second target over for the orange team, evening the score. In order to fill out the requirement of each player attempting to shoot at least once, purple cycles all the way through back to Wendell and he immediately gets their third. Then, once again Laurel follows up with a fourth target hit, extending their lead over orange.

8:11 p.m. – After Laurel goes, Domeick hits a third for orange, but Wendell comes back and hits their fifth. Next up is Michael for orange and he hits their fourth. Laurel misses on her next attempt, then Domenick misses on his next attempt, opening the door for Wendell to close it out and… he does! Purple (Wendell, Laurel, Chelsea Townsend, Libby, Angela and Donathan) win. They leave the decision of ghost island up to rocks and for her first time, Jenna Bowman draws the white rock and heads out.

8:16 p.m. – On ghost island, Jenna is excited for the opportunity to win an advantage, but her urn comes up empty–no game for her. Meanwhile, on the reward feast Wendell is happy to be with Laurel and Donathan who he hopes to strengthen his bond with after a shaky start to the morning. Libby voices to the others that she’s concerned about the votes on her and Angela and Chelseas confess that it’s because of her friendship (alliance?) with Michael who is seen as a threat.

8:20 p.m. – Another pair that many see as a threat is Domenick and Wendell. Michael and Angela discuss the possibility of uniting against Wendell, but Angela is concerned that Michael only ever cares about his own opinion. Angela, in the hopes of stirring the pot, goes back to Kellyn and Chelsea and throws Michael under the bus, prompting word to spread across the entire camp that Michael should be the next one to go.

8:26 p.m. – For their second individual immunity challenge the castaways compete in a food eating competition! We haven’t seen one of these in a looong time! In the first heat, Laurel, Desiree, Libby, Donathan, Michael and Jenna have to eat fish eyes–first three to finish advance. Michael is first, followed by Desiree and Laurel.

8:29 p.m. – In this round the three semi-finalists have to take down two sea slugs and the first two advance to the final round. Angela gets her first slug down in one swallow, but struggles on the second one. Michael becomes the first to finish with Angela right behind him!

8:31 p.m. – And in the final round, Angela and Michael have a showdown to see who can eat the meat of a mother of pearl first. Both have been strong in each round and after their conversation earlier in the episode this is a very interesting match-up! Remaining cool, calm and collected throughout, Angela easily finishes before Michael and wins immunity!

8:38 p.m. – Beating Michael at immunity worked for Angela’s plan to pit Michael and Wendell against each other heading in to tonight’s tribal council. Chelsea, Desiree and Kellyn tell Laurel and Donathan in a private conversation that they’re depending on them in order to split the votes between Michael and Libby in case either use an idol. Later, Donathan tells Michael that he feels caught in the middle, but Michael points out that if they’re splitting the votes then that opens the door for them to rally votes against one of the others and vote someone out with a small majority.

8:41 p.m. – Donathan’s pitch to Laurel is that they remain original Malolo strong in order to even out the numbers to further their chances of getting far in the game. In one scene Domenick tells Libby that they’re voting Michael out and pleads with her to vote with that majority, but then Donathan tells her that they’re actually splitting votes between Michael and her.

8:48 p.m. – With everything up in the air and knowing their each on the chopping block, both Wendell and Michael debate whether or not they should use their idols tonight. At tribal the hot topic is whether or not anyone is ready to make “big moves.” This is something Laurel had been pondering on her own earlier in the day so could be a hint that she’s about to turn on Wendell tonight.

8:59 p.m. – Will Michael be able to turn the tides now that his idol is gone and he’s objectively less of a threat with no loyal allies? Can’t wait to see original Naviti quake and crumble!

Here are the answers to Gold Derby’s contest questions for “Survivor” Season 36, Episode 9:

Who will be eliminated? Libby Vincek

Who will win Immunity? Angela Perkins

Who will go to Ghost Island? Jenna Bowman