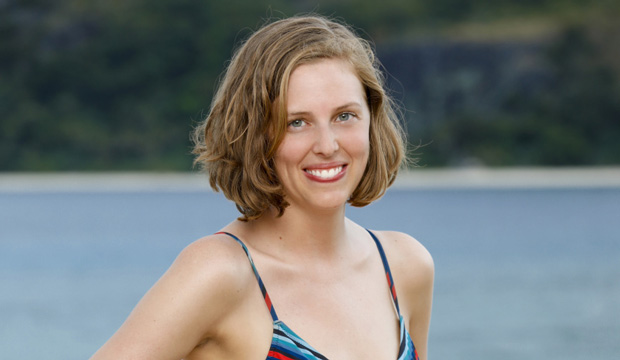 On Thursday night’s merge episode of “Survivor: Ghost Island” the brewing war between Chris Noble and Domenick Abbate finally came to a head, resulting in an iconic blindside of Chris who was eliminated in a near-unanimous vote at a tribal council (his first!) he couldn’t even vote at with a hidden immunity idol safe (and unused!) in his pocket. (Listen to our exit interview with Chris.) With Chris out of the game only 12 players are left and a game once dominated by original tribe loyalty is now wide open to any player willing and prepared to seize control.

Below I offer up our first power rankings of the season, listing all 12 players from most powerful to least powerful with a heavy emphasis on whether or not I think they can win. At the top is Kellyn Bechtold, the player I declared in the premiere episode was already getting a winner’s edit and who since then has continued to be depicted in a positive light. Right below her, if not basically neck and neck with her at the top, is Laurel Johnson, another player I think has a winner’s edit and is one of the players most predicted to win based on our current odds.

As I said above, Kellyn and Laurel have two of the strongest edits this season and, for me, that’s enough to convince me they’re frontrunners to win. But aside from that, they’ve both been instrumental in the dynamics of the votes leading up to this point and from completely different points of view. Kellyn is an original Naviti, the tribe that dominated the first half of the game, and has been fiercely loyal to that tribe. She now commands a Naviti female alliance that counts Desiree, Angela and Chelsea among its numbers.

Laurel on the other hand comes from the original Malolo tribe, but because of the in-fighting among the Naviti men can now rest more comfortably with her strongest ally Donathan. She also has ties to Wendell and Sebastian after playing alongside them on the Yanuya tribe, but with the men becoming the targets early at the merge, Laurel is creating room for her to start making huge moves to get to the top.

SEE‘Survivor: Ghost Island’ episode 8 recap: Who went home as the 3 tribes merged together in ‘Fear Keeps You Sharp’? [UPDATING LIVE]

Libby and Jenna are two of the supporting characters this season, yes, but hear me out. It isn’t insignificant that Libby has been on the radar of a handful of other players in recent episodes. A few weeks ago she was favorably compared to “Micronesia” winner and “Heroes vs. Villains” runner-up and legit legend Parvati Shallow because of her persuasively (whether intentional or not) flirtatious ways. It also isn’t insignificant that in one of the early episodes when Jenna was on the chopping block they gave her a confessional where she acknowledged her resting brat face and how she needs to work hard to get people to open up to her because of it. Libby and Jenna are two very self-aware players and the truth is that strong men fear strong women, especially within the context of “Survivor,” for good reason. I also really loved this week when Domenick tried to pitch an alliance to the two of them and they yessed him to death and then basically said they’ll never trust him.

With idols in their possession, Michael and Wendell could very well maneuver their way closer to the finale if they play them correctly. The fact that this cast of players hasn’t been successful with idols yet doesn’t bode well for them though. Michael had an idol earlier in the season and played it for the wrong person, resulting in what many saw as a premature exit for Brendan Shapiro. Wendell has his first one and, if I remember correctly, only Domenick knows he has it. What worries me about both of these guys is that with Chris out of the game, they have huge targets on their backs as the strongest physical threats going forward. Players likely to win future immunities will always have a target on their back and while idols help they can’t prevent an overwhelming majority from eventually getting them out anyway. The fact is, neither Michael nor Wendell have a deep well of allies to depend on… even if they think they do.

Domenick also has an idol still in his possession even after using the idol from his legacy advantage last week (it turns out he didn’t even need it). But the target on Domenick’s back right now because of the annoying feud he had with Chris is so big that even four idols in his pocket wouldn’t convince me that he has any shot of winning this game. Domenick’s biggest ally is Wendell, a player just as cocky as he is, and who, as we saw at the merge, some of the women (Jenna and Libby) don’t see as particularly trustworthy. Sure, Domenick will last a few more episodes (maybe) and win a challenge or two (maybe), but the best case scenario for him is that he makes it to final seven with his idol and then uses it to make final six. After that? He’s gone.

Desiree and Angela are actually two of the players that I don’t have a good read on. I think they have okay edits and are the exact mix of unlikable and likable that keeps them off everyone else’s radars for better or worse. As part of what I anticipate to be a pretty strong alliance of original Naviti women, both Desiree and Angela would have an influx of power the longer all four of those women remain in the game. The problem for both of them is that at this point Kellyn will have the best narrative to win of all of them so they’ll need to take her out in order to have any chance of their own. Not sure they’ll realize that until it’s too late.

To put it bluntly, Donathan is way too nice to win. There is no chance that anyone in a final six or five with Donathan is going to let him get close to sitting in front the jury next to them. Now, I don’t actually think this is going to be a jury of players that would be particularly inclined to vote for the nicest player to win, but I do think that the fear of him winning for that reason will be enough for others to vote him out. In order to reach the finale Donathan is going to have to rely on the loyalty of Laurel (I think she’ll be loyal), but will need to get his own hands a little dirtier in the process. He might also need to do well in a couple of late-game immunity challenges and simply win his way there.

If Kellyn and Laurel have had really strong edits then Sebastian and Chelsea have had two of the absolute worst. I’m not lying when I say that a friend of mine texted me this week, “There’s a brunette girl I’ve never seen before.” And honestly because we’ve seen so little of what kind of game Sebastian and Chelsea are playing, there isn’t really much to say about either of them. I think the most we’ve seen from Sebastian came from an early episode where he basically developed a crush on Jenna. Neither of these two will win the game, and while I wouldn’t count either of them out for making the finale I don’t think they’re going to be instrumental in getting themselves there.