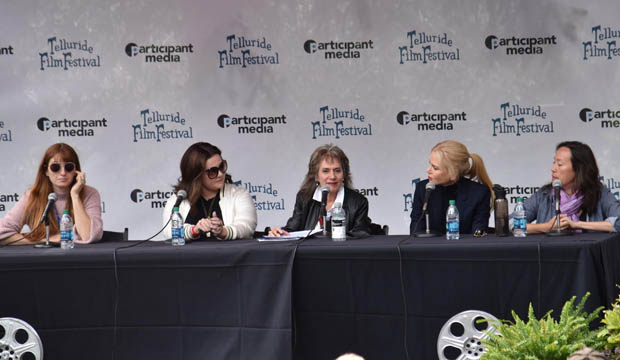 Women ruled the Telluride Film Festival. It may seem unlikely that the world’s shortest film fest showcased three out of the next five Oscar nominees for Best Actress, but there’s a good chance that just happened. Emma Stone (“The Favourite”), Nicole Kidman (“Destroyer”) and Melissa McCarthy (“Can You Ever Forgive Me?”) all have to be considered major contenders — McCarthy fitting that bill most surprisingly of all at the end of what has to be one of the buzziest weekends of her life. In two of these cases (“Can You Ever Forgive Me?” and “Destroyer”) the director was also a woman — the estimable Marielle Heller and Karyn Kusama, respectively — and largely female crews were employed, adding to the sisters-are-filmin’-it-for-themselves feel.

Then consider that two of the very best movies at Telluride were ensemble films that you only gradually came to realize featured nearly all-female ensembles — Yorgos Lanthimos‘ wickedly funny “The Favourite” and Alfonso Cuaron‘s touchingly nostalgic “Roma” — both made by presumably highly empathetic male auteurs. Finally, in putting a feminist cap on Telluride, consider that probably the most celebrated documentary of the festival was “Reversing Roe,” a Netflix pic about the history and current import of the abortion debate.

One of the noontime panels in the park had moderator Annette Insdorf asking Kidman, McCarthy, Kusama and Heller for their take on “inclusion rider” becoming a meme, if not quite way of moviemaking life, this year.

“I think it’s clear that the people at this table are not the people who need the inclusion riders,” said Heller. Kusama said it was really not by some kind of feminist design that most of her top-level creative collaborators on “Destroyer” were women. When she realized what she’d perhaps inadvertently done, she said, “I like the feeling of this. I’m not doing it at the exclusion of anyone. I just love what this group of people brings to the table. And it’s beautifully balanced by the thoughtful, incredibly intelligent and compassionate male members of the team that we also surround ourselves and from whom I demand their best as well as my female partners.”

The best part about the Telluride slate is that none of the aforementioned films feel even remotely like “women’s pictures.” “Roma” is tremendously sweet, if neorealist, but the rest all count as outrageous in their own ways. Even as great a proponent of that so-called genre as George Cukor might blush if he were alive to see an 18th century period piece as ribald, rude and rife with sexually explicit talk as “The Favourite,” or as bloody and headlined by as ruthless an anti-heroine as Kidman’s vengeance-driven cop in “Destroyer.” And contrary to any expectation you might have picked up from the trailer that “Can You Ever Forgive Me?” might go in a maudlin direction, McCarthy’s hard-ass misanthrope character barely softens over the course of the film. These are some seriously and wonderfully scary women, in their own ways.

Speaking of classic women’s pictures, though, the arc that Stone’s character has in “The Favourite” does slightly resemble the path that the title character followed once upon a time in “All About Eve.” In the early 1700s, she is a downtrodden newcomer to the palace, looking to usurp Rachel Weisz’s place as the favorite of Olivia Colman‘s queen. Our sympathy for her and everyone in the piece constantly ebbs and flows, as does a tone that wavers between outright farce and class-conscious melancholy. It was easily one of my favorites (sorry to lose the English U) of the festival. I talked with others at the fest who weren’t willing to go with its abrupt changes in mood, so it may need careful tending in attracting the academy. But Stone has never been better or certainly more wide-ranging in what she has to pull off in the course of a single film. And if, like me, you’ve been waiting all your life to see a much cruder and funnier version of “Barry Lyndon” in which the men just happen to be incidental, our time has come.

Stone was the recipient of one of Telluride’s three tributes this year, and no less charming than expected when sitting for the extended career Q&A that went with it. Her “La La Land” director Damien Chazelle, who came to the festival with her and that film two years ago, showed up to place the Telluride medallion over her neck.

“The relationships that you make are absolutely everything,” Stone said. “The people that I’ve gotten to work with will be, on my deathbed …” She stopped herself. “Which I hope isn’t soon. This isn’t a lifetime achievement, right? Because I thought maybe this would be a bad omen.”

Doing “The Favourite” was outside her comfort zone, figuratively and literally. “It’s 1705, which was about 300 years before any period I’ve ever done something in,” she said. “Also, I was the only American in the cast of all British actors, so it was pretty daunting on a few levels, just having to (A) be British and not stick out like a sore thumb, and (B), not to breathe.” That would be the corset. “My organs shifted in my body for the next month, and then I was like, these are surprisingly comfortable! I realized that my whole body shape had changed, and not for the better. But it a goes back, and that’s the great thing about human bodies.”