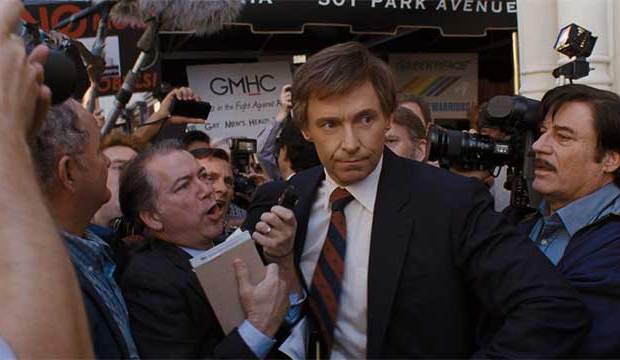 Hugh Jackman was last seen on screen in “The Greatest Showman,” but there’s no show business like political business. He moves on from P.T. Barnum to former senator Gary Hart in director Jason Reitman’s “The Front Runner,” which premiered over the weekend at the Telluride Film Festival, and which could give the actor his second Oscar nomination, after he vied for 2013’s “Les Miserables.”

Jackman comes off as such a warm character in real life — as he did in “Showman” — that you might spend half a second wondering: Can he go chilly enough to convincingly play a one-time presidential candidate who didn’t always seem like the model of transparency and mirth? And then you remember: Oh, right, he is the Wolverine — so whether he’s dealing with a sex scandal or retractable knives in his knuckles, he can play a guy with big, haunting secrets to hide.

Says Reitman, “One word you hear a lot about Gary Hart is ‘enigma,’ even from the people who are close to him. Here was this brilliant guy who was also clearly flawed and made human mistakes, but he’s a hard guy to penetrate. And as an actor, Hugh is someone who has so much warmth. His heart beats right out of his chest, and you feel it in his performances, whether he is the Greatest Showman or whether he’s Logan and he’s literally ripping arms off. And I’ve never seen him do anything like this, where he plays a closed box that’s just giving you these tiny windows to find a way in.”

I spoke with Reitman after one of the movie’s screenings in Telluride, a bucolic mountain setting that felt peacefully far away from the current turmoil of Washington, which the filmmaker seemed determined to bring us back to with his new drama, if only by proxy. “The Front Runner” was enjoying its world premiere at the Telluride Film Festival, but Reitman had just come from a very different screening… for no less an audience than Hart and his wife Lee, who have been married since 1958, even despite the revelation of an affair in 1987 that quickly put a kibosh on his lead as the presumptive Democratic candidate for the top office.

The film, based on a book by one of Reitman’s co-scripters, Matt Bai, is, as the director describes it, “a movie with a dozen points of view.” If one of those possible points of view is that the media were derelict in rushing to judgment with the scandal story, another possible takeaway is that Hart really was revealed as being too deceptive to be a credible candidate. (Not that that seems to have stopped anybody since.) So, given that this is hardly an authorized version of Hart’s personal story, what did the man himself think of the movie in this private screening?

Reitman hesitated when I pressed for details. “For so many reasons,” he said after a pause, “I do not want to speak for Gary and Lee Hart. They’re going to speak for themselves. But I can say that their response to the movie was positive, despite it being a film about the most difficult week of their lives.” Although Reitman won’t characterize how the couple reacted to the themes implicit in the portrayal of their lives, he said, “It’s funny, because their initial responses were all about filmmaking; they like how it was written. They love Hugh’s performance. Gary at one point said, ‘Do I really talk like that?’ and Lee Hart was like ‘Oh, yeah, that’s exactly how you speak, darling.’”

Telluride executive director Julie Huntsinger had touted the film to the press shortly before the premiere as Reitman’s most mature work: “There’s not a bit of snark in it — even though it’s very funny.” Reitman had in mind the knowing tone of one of his favorite movies, Michael Ritchie’s “The Candidate,” which starred Robert Redford as a Democratic front runner with no sense of direction, and was also, like this new movie, very much an ensemble piece full of one-liners from political operatives. When I told Reitman that I knew Ritchie a little bit and felt confident he would be proud of the extent to which this film is an homage, the filmmaker seemed visibly touched.

“When I met Matt and (third co-writer) Jay (Carson), one of the first things we did was watch ‘The Candidate’ together at my house. There was something so observational and perfect about that film in the way that it approached politics, and how the innocuous conversations were given just as much presence as the important conversations, and every character in that movie has a real life and is three-dimensional.”

The element of “The Front Runner” that will alternately either delight or aggravate a lot of viewers is how it gives everyone in the movie a hard time as the same time it deeply emphasizes with them. That lack of a singular message was very much intentional on Reitman’s part. If you want to see it as a broadside against the media who brought down a man who could have enacted great change in America, and that sex scandals shouldn’t matter now any more than they were allowed to in JFK’s and LBJ’s day, that’s certainly one way to read it. If you’re inclined to think that Hart brought it on himself, and that we’re past the point where private conduct doesn’t matter, that’s a legit reading, too.

The reporters at the Miami Herald who staked out Hart’s residence and spotted Donna Rice coming out aren’t portrayed in the noblest light. But, Reitman said, “I have a lot of empathy for journalists. I mean, it’s impossible not to right now; they’re getting the s— beaten out of them every single day. And I have a lot of empathy for the characters at the Washington Post and at the Herald in this movie who are, I think, genuinely trying to do the right thing. But it’s very hard to figure out what the right thing is sometimes.

“Candidates used to be selected in back rooms, and that power was handed over to the people that did not have all the information about 20 different candidates. It’s impossible to do the research, and it was the job of journalists to figure out who the hell these people were, so that the public would know. And (the editor at the Miami Herald) saw that as his mission. Whether or not he took that mission too far, I mean, that’s the real question. But also, that’s a newspaper that struggled with the question of whether they go to press immediately or hold off… They felt that thing that is now ever-present, which is how fast can you get to print? It used to be a question of days and now it’s a question of minutes. You see even in film reviews the way people are writing their film review on their phone as the credits are playing, because you just need to be the first person to hit the button.”

There are a few kings of Telluride — namely, Ken Burns, Werner Herzog and Errol Morris, festival favorites whose films always tend to premiere here first. Reitman seems to have joined their company as fellow royalty. “The Front Runner,” which will also play in Toronto, is Reitman’s fourth film to have its world premiere in Telluride, after the career-making “Juno,” “Up in the Air” and “Labor Day,” the first two of which got him Oscar-nommed.

“What’s cool about coming here is it’s this combination of filmmakers you’ve met but also film lovers you’ve met. As you now, it has more regulars than any other festival you go to. You go to Sundance, it’s so chaotic, and you’re not gonna run into the same group of people you saw every year. Here, it literally is a family reunion.

“I love this festival. Every filmmaker loves this festival. I’m not saying anything new there. But look, you work for however many years making a movie. Everybody who works on the film sacrifices elements of their life. And the first people you show it to matter. There’s something really nice being in a room full of people who actually love movies and they’re not there for the party or to be seen or to take some sort of photo. This is a town that is brimming with people who are like me, so those are the people I want to show my film to first.”