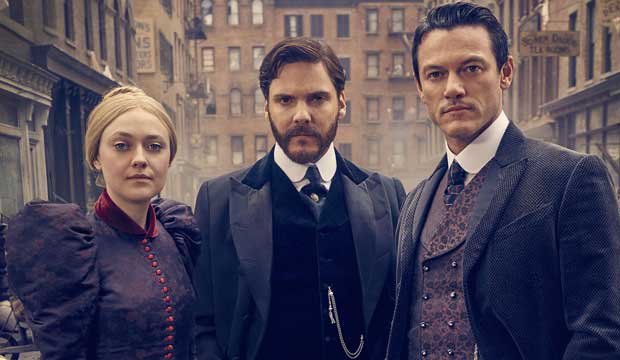 TNT is hoping to make a big mark on the Emmys with their limited series “The Alienist.” Produced by Cary Joji Fukunaga (“True Detective”), the show focuses on a criminal psychologist (Daniel Brühl) who teams up with a newspaper illustrator (Luke Evans) and a headstrong NYPD secretary (Dakota Fanning) to investigate a serial killer in 19th century New York City. Gold Derby recently spoke with Brühl, Evans, and Fanning, director Jakob Verbruggen, cinematographer P.J. Dillon, production designer Mara LePere-Schloop, costume designer Michael Kaplan, and composer Rupert Gregson-Williams about their work. Scroll down and click on their names below to be taken to their full interviews.

To prepare for his role, Brühl read the works of psychology pioneers like Sigmund Freud, finding a lot of similarities between his character, Dr. Kreizler, and that famous Viennese founder of psychoanalysis. But “the handiest thing is that I’m married to an alienist,” he reveals. “My wife is a psychologist, so she supported me all the way through.” She put him in touch with criminal psychologists, and he even attended psychotherapy in Budapest “just to learn a bit more about that.”

Best known for his film and stage work, Evans was eager to dip his toes into episodic television for the first time. “It was an exciting chapter,” he says. “Spending seven months within a character, and having 10 hours to go on that journey with that character, was a new thing for me.” And it was quite a journey. His character John Moore is a man with “a lot of issues.” A high-functioning alcoholic who was abandoned by his fiancee, Moore “wears his heart on his sleeve.” Despite graduating from Harvard with Dr. Kreizler (Brühl) and Police Commissioner (and later President) Theodore Roosevelt (Brian Geraghty), “he’s never really found his purpose in life.” So there are “a lot of things he carries with him which you can see affects his daily life, and how he looks at his future.”

Fanning plays Sara Howard, a trailblazer for women on the police force. “I was thrilled at the opportunity to show such a pioneer, ground-breaking character for 1896,” she says. “We didn’t get to see women in those positions very often, so I loved that aspect of the story..” Fanning has been acting since childhood, reaping a SAG nomination for her supporting role in “I Am Sam” (2001) when she was just seven-years-old.

SEE Emmys 2018 exclusive: TBS and TNT categories for ‘The Last O.G.,’ ‘The Alienist’ and more

Verbruggen and his production team felt that visual “authenticity was key” to telling this story. “We became obsessed with detail. We became obsessed with research. All that was very important to make this series feel visceral, real, authentic, and therefore, hopefully believable.” So the director didn’t want to make the period feel radically different from the present because “human nature hasn’t changed,” and therefore “the world hasn’t changed that much.” Verbruggen received a BAFTA TV nomination for the BBC series “The Fall” (Best Miniseries in 2014). He has also directed episodes of such acclaimed shows as “Black Mirror,” “House of Cards,” “London Spy,” and “The Bridge.”