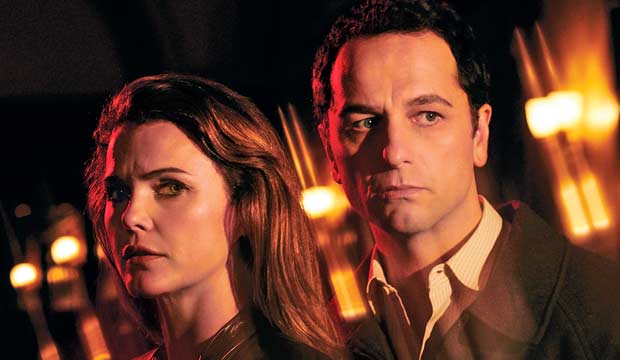 “I was so surprised, which I always am with their storylines,” recalled Russell when asked about her first reaction to the finale script written by Weisberg and Fields. “I thought they pitched it perfect. I really did. It was so satisfying.” The episode, entitled “START,” finds Elizabeth (Russell) having to flee to Russia with her family after they are found out to be spies by their FBI agent neighbor Stan Beeman (Emmerich).

Rhys, who played Elizabeth’s melancholy husband Philip, found the script to be surprising “in the best way,” as opposed to being “explosive or obvious.” Instead, the script contained “far more deeper-reaching surprises that just tore the heart out of you.”

Can “The Americans” hit the Emmy jackpot for its last season? Rhys and Russell have contended in Best Drama Actor and Best Drama Actress for the last two years, while the show picked up its first nomination as Best Drama Series in 2016. Martindale won prizes as Best Drama Guest Actress in 2015 and 2016, competing in 2013 and 2014 (she’s eligible in Best Drama Supporting Actress this year). Weisberg and Fields received writing nominations for the past three years, for the episodes “Do Mail Robots Dream of Electric Sheep” (2015), “Persona Not Grata” (2016), and “The Soviet Division” (2017).

Click on their names below to be taken to their full red carpet interviews: