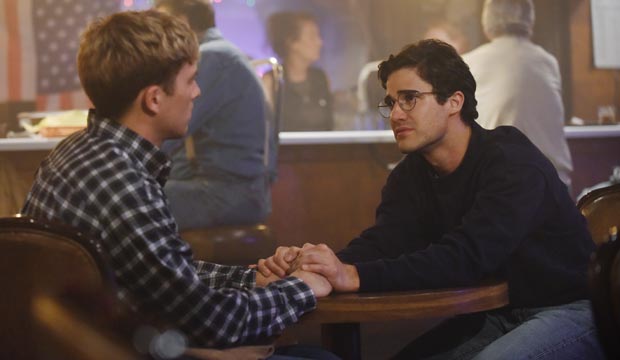 After sweeping the Emmys in 2016 for its first season, “The People v. O.J. Simpson,” the FX anthology series “American Crime Story” is hoping for a repeat victory with its second installment, “The Assassination of Gianni Versace.” The FX series focuses on the murder of designer Gianni Versace (Edgar Ramirez) by spree killer Andrew Cunanan (Darren Criss). Gold Derby recently spoke with Criss, Ricky Martin, Cody Fern, Jon Jon Briones, director/producer Daniel Minahan and composer Mac Quayle about their work on the show. Scroll down and click on their names below to be taken to their full interviews.

Playing Cunanan was a challenge Criss happily accepted. “I’m kind of a glutton for punishment,” he reveals about delving into the pathology of a serial killer. “I enjoy doing that emotional Tetris. I have my sort of ‘CSI’ board of … emotional peaks and events in his life. And that’s the luxury of having a story that has a beginning and an end over nine episodes. You know when you can play these moments. If you’re working on a series for a long period of time, you don’t know where these things are going to go.” Criss previously competed at the Emmys for penning an original song in the last season of “Glee” (2015), and for playing Cunanan he’s a contender for Best Movie/Mini Actor.

SEE Will ‘The Assassination of Gianni Versace’ be the latest Ryan Murphy production to dominate Best Supporting Actor at the Emmys?

“I think the story is full of injustice, homophobia,” says Martin, who plays Versace’s longtime partner Antonio D’Amico. A two-time Grammy winner, Martin admits he did “Versace” “for my kids, for my family, and to create awareness, to create consciousness. At the end of the day this is a story that could happen again. The fact that we’re being so loud and direct to the audience, and raw and real about this unfortunate crime is something very important.”

Fern plays David Madson, who was forced to go on the run with Cunanan after he murdered a mutual friend right in Madson’s apartment. Madson was suspected to be Cunanan’s accomplice until he was found murdered several days later. In preparing to play Madson, Fern read testimony given by Linda Kasabian — a member of Charles Manson’s infamous “Family” — during Manson’s trial. “I remember being struck by the psychology of someone who was essentially under the wrath of a serial killer, and feeling like they’re unable to break away.”

SEE Emmy race for Limited Series is a three-way race, according to editors: ‘Versace’ vs. ‘Godless’ vs. ‘The Looming Tower’

Briones has a memorable role as Cunanan’s father Modesto. Because of the lack of available research on the elder Cunanan, Briones says he relied on Maureen Orth‘s book, “Vulgar Favors,” to try to get inside Modesto’s mind. But ultimately Briones credits the script by Tom Rob Smith (“London Spy”) for giving him what he needed. Briones felt he “understood who this character is, so I just went with that. I just trusted the material.”

“We touched on really important topics about what it was like to live in that time and how these people were all impacted by this one guy’s actions,” says Minahan, who directed four episodes of the series. Originally titled “Versace/Cunanan,” they ultimately went with “The Assassination of Gianni Versace” to eschew explicit reference to its main character. “I don’t think you can really give those two characters parity,” he explains. “I don’t think it’s fair to honor Andrew Cunanan that way.” Minahan reaped his first Emmy nomination last year as an executive producer of Best Drama Series nominee “House of Cards.”

SEE Matt Bomer previews ‘The Assassination of Gianni Versace’: It ‘dives so deep’ into the shocking murder [WATCH]