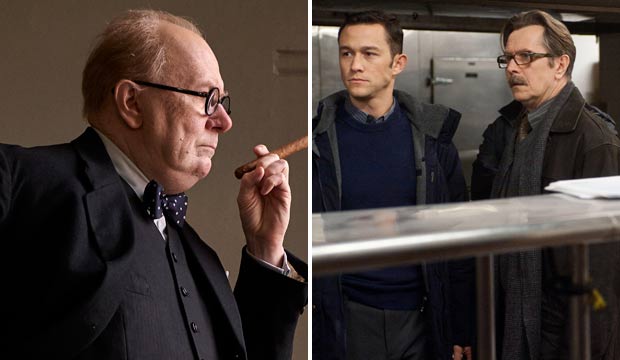 “The Dark Knight Rises” (2012) was the only film in Christopher Nolan‘s Batman trilogy not to receive a single Oscar nomination but despite that it has had a pretty good track record at the awards. By the time of its release four of its actors already had Oscars: Christian Bale (“The Fighter”), Marion Cotillard (“La Vie en Rose”), Morgan Freeman (“Million Dollar Baby”) and Michael Caine (“Hannah and Her Sisters” and “The Cider House Rules”). Then Anne Hathaway won an Oscar for “Les Miserables,” which opened the same year. This year’s Oscars turned out to be pretty good for “The Dark Knight Rises” too, especially for Gary Oldman, the erstwhile Commissioner Gordon who just won Best Actor for “Darkest Hour.” Check out the complete list of Oscar winners here.

Oldman won for his performance as British Prime Minister Winston Churchill. It was only the second nomination for the veteran actor, who had previously contended for his leading role in the spy drama “Tinker Tailor Soldier Spy” (2011). And “Darkest Hour” happened to be competing for awards in the same year as another British film set during World War II: “Dunkirk.” Those films were connected by the fact that they both took place during the evacuation of Allied soldiers from the beaches of France, but also by the fact that “Dunkirk” was directed by Oldman’s “Dark Knight” director Nolan.

“Dunkirk” won three Oscars of its own, almost all of them for crafts artists who previously worked with Nolan on “Dark Knight Rises.” Film editor Lee Smith prevailed, as did sound editors Richard King and Alex Gibson and sound mixers Gregg Landaker, Gary Rizzo and Mark Weingarten, of whom only Weingarten hadn’t collaborated with Nolan on “Rises.”

So will “Rises” continue to rise after the fact? Following his role in the film as Batman’s nemesis Bane Tom Hardy earned a Best Supporting Actor Oscar bid for “The Revenant” (2015), but didn’t win. Coming up next he’ll be playing the comic-book character “Venom,” not your typical awards fare, but he’s also slated to play a biographical role, Al Capone in the upcoming “Fonzo.” Perhaps he’ll be the lucky seventh Oscar winning actor to come out of the “Dark.”