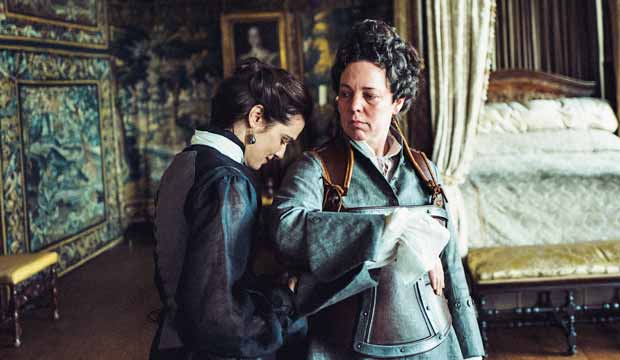 As of this writing it has a MetaCritic score of 91 based on 28 reviews, which makes it one of the top 10 highest scoring films of 2018 so far. And on Rotten Tomatoes it has been rated 95% fresh based on 84 reviews. It’s being called “extravagantly wonderful,” “bawdy” and “bacchanalian.” But while it’s “filthy-minded” and “deliciously nasty” with “venomous insults” and “backstabbing,” it’s also “a little heartbreaking.” And it boasts “perfectly pitched” performances by its actors Rachel Weisz, Emma Stone and especially the “astonishing,” “towering” Olivia Colman as the queen.

“The Favourite” currently ranks fourth in our Oscar predictions for Best Picture with odds of 9/1 behind “A Star is Born” (7/1), “Roma” (15/2) and “Green Book” (8/1). But our Expert Tariq Khan (Fox TV) thinks the film will pull off an upset victory. Indeed, this time in their respective Oscar campaigns “Shakespeare in Love” and “The King’s Speech” looked like underdogs too, up against “Saving Private Ryan” and “The Social Network,” respectively. And Oscar voters have gone for offbeat auteur films in recent years like Alejandro Gonzalez Inarritu‘s “Birdman” (2014) and Guillermo Del Toro‘s “The Shape of Water” (2017).

What do you think? Will it win Best Picture? Check out some of the reviews below, and join the discussion on this and more with your fellow movie fans in our forums.

Jessica Kiang (The Playlist): “On three separate occasions during the first press screening of Yorgos Lanthimos’ ‘The Favourite’ in Venice, the audience spontaneously applauded … Why only three? Why wasn’t everyone applauding every damn second of this extravagantly wonderful, deeply hilarious and fabulously entertaining movie? … ‘The Favourite’ is a bawdy, bacchanalian beauty that manages to be both filthy-minded and a little heartbreaking.”

Katie Rife (The A.V. Club): “It’s got the venomous insults, the nimble comebacks, the backstabbing, the sex, the costumes, the sets, and everything else you could ever want from a viciously witty period piece. But this deliciously nasty riff on the Jane Austen tradition also has an absurdist streak that, along with its aggressively stylized camerawork, provides an unpredictable high-wire thrill all its own.”

Erica Abeel (Film Journal International): “Rachel Weisz, Emma Stone and particularly an astonishing Olivia Colman find a perfectly pitched acid tone in harmony with the director’s edgy vision. I think it would be a mistake to read into Sarah and Abigail’s battle for dominance some feminist message about women’s ’empowerment.’ That said, in focusing on a trio of dynamic women in a milieu normally dominated by men, Lanthimos has created a film that feels very much of the moment.”

Dana Stevens (Slate): “Though I found plenty in this film to admire, most notably a towering lead performance from Olivia Colman as the appetite-driven queen, I also confess to finding ‘The Favourite,’ which runs only one minute over two hours, something of a long sit. It’s a film so replete with ostentatious Directing … that the story is sometimes hard to discern beneath the layers of crenellated fondant.”