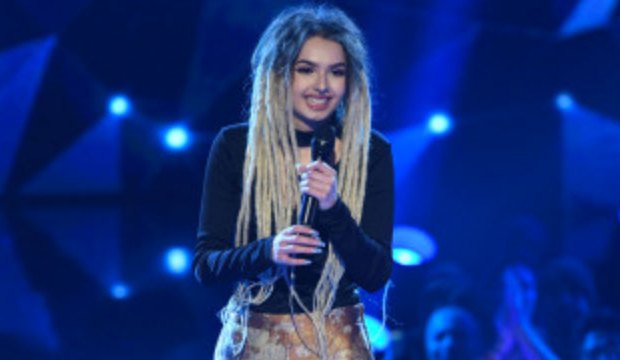 On the final of “The Four” on Feb. 8, Evvie McKinney pulled off a stunning upset by winning over frontrunner Zhavia. Heading into the night, Zhavia was the top pick of a whopping 76% of our readers while McKinney managed a mere 12% of the vote. The other two finalists — Candice Boyd and Vincint Cannady — earned just 8% and 4% respectively. If you haven’t voted in our poll yet, be sure to do so at the bottom of this post and then sound off in the comments section about this new reality competition series hosted by Fergie.

McKinney was named iHeartRadio’s “On the Verge” artist and was signed to Republic Records. That label’s head of talent, Charlie Walk, had been a judge on the first five episodes of this new reality competition series but he stepped aside following allegations of inappropriate behavior.

Without Walk, it was left to judges Sean Combs, DJ Khaled and Meghan Trainor to rate the talent on the final. The audience gave McKinney the right to choose who to challenge after her scorching performance of Tina Turner‘s “Proud Mary.” She went with Zhavia, who sang Rihanna‘s “Man Down” for survival. The trio of judges preferred McKinney’s rendition of the Bill Withers‘ classic “Ain’t No Sunshine.”

SEE ‘The Four’ episode 5 recap: Did the right artists win seats in the finale? [POLL]

Cannady and McKinney were new to the show in week five while Boyd and Zhavia had both been bounced from the show earlier in its run. Cannady had won the right to challenge by winning over the judges with his version of “Magic” by Coldplay. He went after the seat claimed by Jason Warrior in week two. While Warrior struggled with “Ordinary People” by John Legend, Cannady won the audience vote with his version of “Sittin’ Up in My Room” by Brandy.

McKinney earned the right to challenge after her performance of “Rise Up” by Andra Day. She faced Kendyle Paige who had only gotten her seat in week four when she defeated Zhavia, who’d won her place in week one. The audience opted for McKinney’s searing singing of “I Never Loved a Man (The Way I Loved You)” by Aretha Franklin over Paige’s performance of “Stay” by Alessia Cara.

Boyd had earned a seat in week two over Ash Minor before being ousted in week three by Tim Johnson, Jr. In week five, she wowed with “Love” by Keyshia Cole and chose to challenge Nick Harrison. He sang “All the Way Up” by Fat Joe but the audience preferred Boyd’s version of “Ex-Factor” by Lauryn Hill.

Zhavia earned her right to challenge with “Bodak Yellow” by Cardi B. She chose Johnson, Jr., who had been spared from having to defend his seat in week four. He did well with “Earned It” by The Weeknd but the audience preferred Zhavia’s version of “Say Something” by A Great Big World.