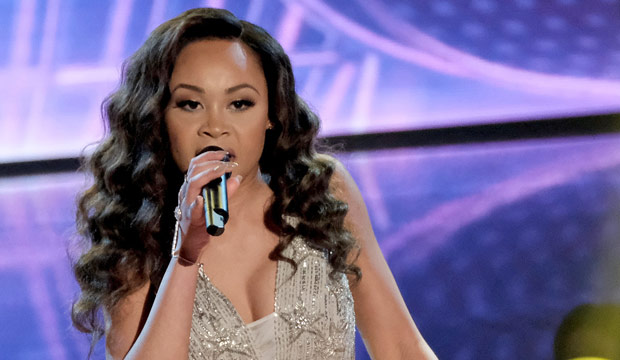 Sean Combs, DJ Khaled and Meghan Trainor crowned 20-year old Evvie McKinney the first-ever winner of “The Four: Battle For Stardom” on Thursday, February 8. The gritty R&B singer wowed the panel with her fearless performances and powerful voice. In addition to the title, Evvie was named iHeartRadio’s “On the Verge” artist and was awarded a recording contract with Republic Records. But do you agree with the panel’s decision? Or did you think Candice Boyd, Vincint Cannady or Zhavia gave the superior performance at the finale? Vote in our poll below.

Evvie was the last challenger to audition on “The Four” Season 1, making her first appearance just last week. But her undeniable energy on the stage made her impossible to forget. She sang “Rise Up” for her first song and the panel instantly wondered if they had a star on their hands. Any doubt was erased after she bulldozed her way through “I Ain’t Never Loved A Man (The Way That I Love You)” and stamped her golden ticket to the finale.

With only two performances under her belt, most viewers believed Evvie would ultimately lose the crown to Zhavia. The 16-year old had been a favorite on the series since Week 1 and won our poll last week when we asked readers who they thought should be declared the champ. But Evvie persisted and proved herself at the finale. For her first performance she tore up the stage with “Proud Mary,” winning the studio audience vote and the advantage of choosing who she wanted to battle head-to-head in round two.

When faced with that decision, Evvie made the bold move to challenge the season-long front-runner, Zhavia, proclaiming, “I want to win.” For her second performance, the Tennessee native delivered a blistering performance of “Ain’t No Sunshine.” After Zhavia’s performance of “Man Down,” Evvie was declared the winner. Next, Evvie completed her run to the winner’s circle with an emotional performance of the ballad “Glory.” It was enough to surpass Candice’s impressive interpretation of “I Have Nothing” and Evvie was crowned the champion. But was she YOUR favorite of the night?