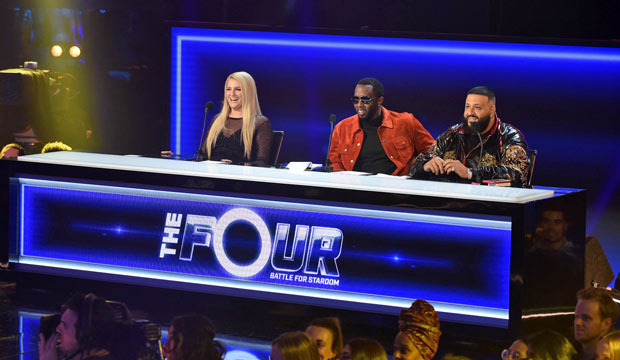 In the sixth and final episode of Fox’s reality TV music competition “The Four,” one talented artist was named the show’s first-ever winner after a season of shocking eliminations and breathtaking vocals. At the start of the Season 1 finale, the four artists sitting in the coveted seats were 20-year-old Evvie McKinney from Memphis, Tennessee, 26-year-old Vincint Cannady from Philadelphia, Pennsylvania, 27-year-old Candice Boyd from Rancho Cucamonga, California, and 16-year-old Zhavia from Los Angeles, California. Which artist earned the confetti shower and bragging rights as the inaugural winner of “The Four: Battle For Stardom”?

Below, check out our minute-by-minute “The Four” recap of Season 1, Episode 6 to find out what happened Thursday, February 8. Then be sure to sound off in the comments section about your favorite singers, which performances had you in tears and what you think of this season’s champion. Zhavia was our readers’ pick for they WANTED to win, but they did get their wish?

7:59 p.m. – “Previously, on ‘The Four’!” In last week’s fifth episode host Fergie and all-star judges Sean Combs, DJ Khaled, Meghan Trainor and Charlie Walk helped determine which artists sat in the final seats. The first three judges will all return for tonight’s finale, but Walk has left the show due to allegations of sexual misconduct. The time has come to see who’ll win Season 1 of “The Four,” so let’s get started!

8:10 p.m. – Zhavia, Candice, Vincint and Evvie opened the show with “The Edge of Glory” by Lady Gaga. Interestingly enough, I thought Vincint sounded the best and he was the one I was least interested in hearing. The Final Four will have to face their toughest challenge yet this season: each other! There will be three rounds of competition. In round one, each will perform and the audience will vote for their favorite. That artist will then choose the match-ups for round two. The two victors from that will compete in the final round for the title.

8:15 p.m. – Candice is up first, performing “Don’t Speak” by No Doubt. It sounds like a Beyonce-style cover of the hit. Powerful, but it wasn’t my favorite performance of hers. The judges all had high praise for the powerful R&B singer.

8:20 p.m. – Next up is Evvie with “Proud Mary” by Tina Turner. I love her sass. And this girl can move! I’m absolutely in love. Give her this title now! It was an absolutely fearless, gritty, slaughtering of the stage. That was far and away the best performance that has taken place on this show. The entire panel of judges have their jaws on the floor.

8:35 p.m. – Vincint is third to perform and he is taking on “Creep” by Radiohead. This song has been so done so many times, he better really BRING IT if he wants to stand out. I have to admit his mix of power, falsetto and complex runs shocked me. Halfway through the performance, it became the wrong anthem we know it to be and the panel were on their feet. Bravo! Both Evvie and Vincint definitely proved they may have been here the shortest amount of time, but are worthy of this finale.

8:45 p.m. – Zhavia is last to perform, singing “One Dance” by Drake. Her diction drives me crazy, I can’t understand a word she says. The performance was a total snooze and the worst of round one. The audience couldn’t possibly vote her through based on reputation could they? The panel wasn’t impressed, but basically admitted they’ve wanted her to win all season. If she wins after performances like that, why even bother with the competition?

8:50 p.m. – The audience voted to decide which member of The Four gave the best performance of round one. The winner was Evvie! Yes! That was so well-deserved. Who will Evvie choose to face off against? Zhavia! Evvie chose Zhavia because she wants to win and needs to take down the dread-locked teenager to take the crown.

8:55 p.m. – Zhavia is performing “Man Down” by Rihanna to impress the panel in this do-or-die situation. Her voice is just as inconsistent as it was the last round. I can tell the panel is doing everything in their power to justify their infatuation with her, but I’m not feeling it. She got in Evvie’s face during the performance and then just screamed her way to the end.

9:05 p.m. – Evvie is up next with “Ain’t No Sunshine” by Bill Withers. Her raspy vocals are giving this song so much edge and sex appeal. She has so much confidence on stage and is absolutely owning this performance! It was dirty, grimy, and absolutely delicious. If she doesn’t win this show is rigged! What will the panel decide?

9:10 p.m. – The panel had to decide who won the challenge. In all likelihood, this will decide the ultimate champion. DJ Khaled is begging for it to be a tie. It’s starting to get annoying. Finally, Diddy announced the winner was Evvie! Yes! Justice was served. Evvie broke down in tears and could barely speak. Vincint and Candice asked her if she was okay and she looked at both and nodded, “Yes,” but in her mind she was probably thinking, “I’m so relieved because I know I’m about to wipe the floor with y’all.”

9:20 p.m. – Vincint is first up in the next battle, singing “Locked Out of Heaven” by Bruno Mars. His voice is strong, but I felt it started out a little boring. He broke into some dance moves halfway through the song and everything started to come together. At the end, he let out a falsetto belt that brought the panel to their feet. Overall, it was a very good performance.

9:30 p.m. – Candice is up next with one of Whitney Houston’s most epic anthems, “I Have Nothing.” This song is no joke, but Candice is holding her own. I love the smooth texture of her voice, but I can’t help but hear Beyonce every time she sings. Candice is one heck of a singer though. Who will the panel chose? Candice!

9:35 p.m. – Well, it’s time for an epic diva showdown for all the marbles! Who will bring the best performance to round three? Evvie or Candice? Let’s find out!

9:50 p.m. – Evvie’s final performance is “Glory” by John Legend and Common. After displaying her dance abilities earlier, it appears she wants her voice to be the final thing the panel remembers when deciding her fate. The rasp in her voice does not negate the power and she has a tone that is all her own. It was a stellar ending to her time on this series.

9:55 p.m.  – Candice has one more shot to prove why she should win, with “Stay” by Rihanna. I love her voice on this song, it was a perfect choice. But once again, I hear Beyonce! I simply can’t help it. It’s certainly a compliment to Candice, but we already have a Beyonce, Evvie is in a lane all her own. Regardless of what happens, these were two beautiful, talented women in the Final 2.

9:59 p.m. – After a rocky season, I have to say this series actually found two worthy finalists. I wasn’t sure it would happen. Kudos to the panel for figuring this out because I was absolutely skeptical. Now, the panel has decided who will be crowned the champion. And the winner is…Evvie McKinney! Congratulations to her on a well-deserved win!