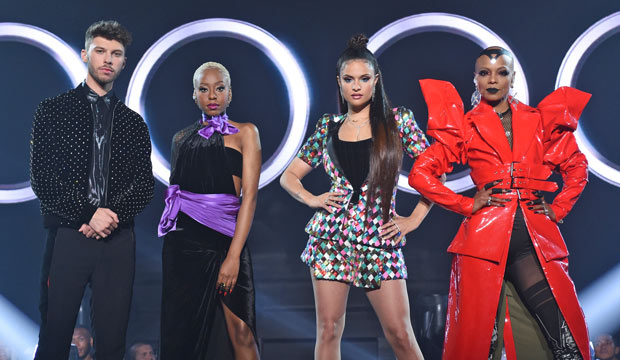 After eight weeks of auditions, challenges and comeback performances, the finale has been set for Season 2 of “The Four.” James Graham, Leah Jenae, Whitney Reign and Sharaya J will face off in head-to-head battles before the panel consisting of Sean “Diddy” Combs, DJ Khaled and Meghan Trainor determine the winner. Fergie will emcee the grand finale airing Thursday, August 2 on Fox. Read our summary of each artist’s journey below and then vote in our poll to let us know who YOU want to be crowned the Season 2 winner.

James Graham: The 21-year old from Chelmsford, Essex England was cast as an original member of “The Four” and sang “I Can’t Make You Love Me” in his debut performance. In Week One he defeated Rebecca Black after singing “A Song For You.” During Week Three he sent home Ebon Lurks after serenading the audience with “You Are So Beautiful.” In Week Four he defeated Dion Rene with a thrilling rendition of “Human Nature.” During Week Five, James continued his winning streak by singing “On Bended Knee” to eliminate Ronnie Smith Jr. His dreams were nearly crushed during Week Six when Leah Jenae unseated him after his performance of “Want to Want Me.” Then, James returned for the Week Seven comeback episode, singing “Writing’s On the Wall” to defeat Jesse Kramer and “Without You” to unseat JeRonelle McGhee for a spot in the finale.

Leah Jenae: This 17-year old from Newark, New Jersey has had the shortest run of all the finalists. Leah first appeared in Week Six when she dazzled the panel with her rendition of “Best Part.” She proved to be a true threat when she chose to challenge James, who had long been considered the front-runner. With a stunning performance of “Call Out My Name,” she unseated the longstanding member of The Four. In Week Seven she defended her seat, singing “Focus” to fend off returning challenger Carvena Jones.

Whitney Reign: This 25-year old from Chicago, Illinois first stepped on “The Four” stage during Week Two. Her audition song “Issues” allowed her to challenge and unseat Stephanie Zelaya with “It’s a Man’s Man’s Man’s World.” In Week Three Whitney defended her seat when she performed “(You Make Me Feel Like) A Natural Woman” to send home Matt Bloyd. In Week Five, Whitney hit a bump in the road when Ali Caldwell unseated her after a performance of “If You Don’t Know Me By Now.” Whitney returned in the Week Seven comeback episode, where she proved herself worthy of the finale with a pair of rematches. First, she knocked off Stephanie Zelaya for a second time with “Mama Knows Best.” Then she took down the woman who had taken her seat before, Ali, with a showstopping performance of “Don’t Let Go (Love).”

Sharaya J: The 34-year old rapper from Atlanta, Georgia made history when she became the first artist to begin as a member of the original four and go undefeated all the way into the finale. Sharaya’s debut performance was “Banji Certified.” In Week Two she performed “Plain Jane” to eliminate James Farrow. In Week Three she lit the stage on fire with “Stir Fry” during her take-down of Lil’ Bri. She performed an original song titled “Go Raya” in Week Four to knock Brennan Villines out of the competition. Sharaya came out victorious in Week Five after performing “She’s a Bitch” to send home Dylan Jacob. In Week Six, she turned up the heat even further when “I Don’t F*** With You” sent AJ Reynolds packing. Finally, Sharaya solidified her place in the finale when she beat down Dylan Jacob for a second time with “Mama Said Knock You Out” in Week Seven.