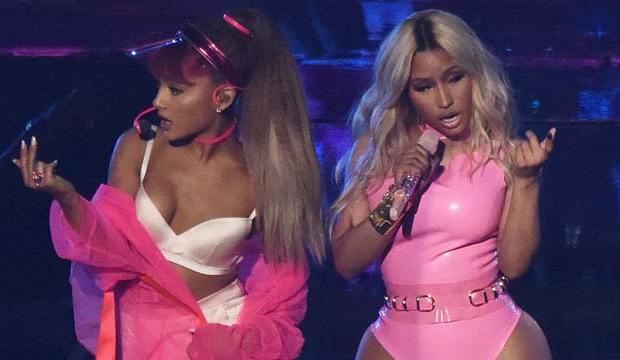 When Fox’s reality TV singing competition “The Four” returns for Season 2, they’ll be down a judge. In the wake of allegations of inappropriate behavior, Charlie Walk left the series just before filming the season finale. Assuming that the other three judges — Sean Combs, DJ Khaled and Meghan Trainor — all come back, which music superstar do YOU think should replace Walk on the A-list judging panel? Give us your thoughts by voting in our poll below.

We’d love to see a female powerhouse take over for Walk, since his alleged mistreatment of women is what resulted in his ouster from “The Four: Battle for Stardom.” Artists like Ariana Grande, Nicki Minaj and Lady Gaga would be perfect, not just because of their raw talent, but for the way they’d no doubt speak their minds and be honest with the acts.

Former reality sensations like Carrie Underwood, Adam Lambert and Chris Blue also come to mind — how interesting would it be to see them judging young artists after prevailing on shows like “American Idol” and “The Voice”? “The Four” also can’t go wrong with hiring a comedian like Sarah Silverman, Ricky Gervais or Kathy Griffin to keep things lively and deliver viral moments.

“Out of respect for the contestants, my fellow judges and everyone involved with the show, I have made the decision not to attend the finale of ‘The Four,’” Walk said in a statement before leaving the show. “I do not want my presence to be a distraction.”

The finale of “The Four” divided fans, with only 48% agreeing that Evvie McKinney should have won. According to our recent poll results, 34% thought Zhavia was the rightful winner, while 10% chose Vincint Cannady and 8% picked Candice Boyd.