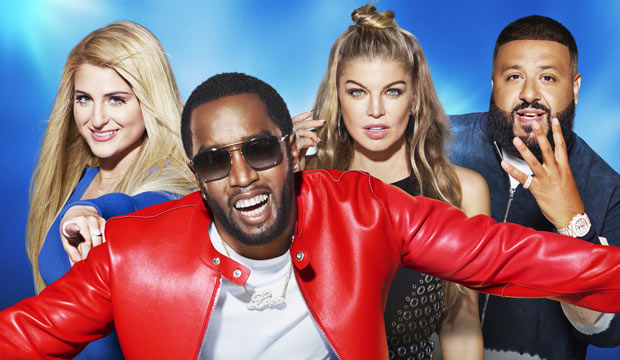 At the start of Week 4 of Fox’s “The Four,” the incumbent chair-holders were 21-year-old James Graham, 34-year-old Sharaya J, 21-year-old Jesse Kramer and 25-year-old Whitney Reign. This marked the first time in the history of the music competition that all four members successfully held their seats. Was “The Four” history made two weeks in a row in tonight’s episode? Sean Combs, DJ Khaled and Meghan Trainor returned as coaches/judges, while Fergie continued hosting the reality TV show.

Below, check out our minute-by-minute “The Four: Battle for Stardom” recap of Season 2, Episode 4 to find out what happened Thursday, June 28. Then be sure to sound off in the comments section about which singers you’re rooting for and who you think will ultimately join “The Four” winners list. Keep refreshing/reloading this live blog for the most recent updates.

8:00 p.m. – “Previously on ‘The Four’!” As a refresher, last week James crooned “Lately” and took out challenger Christian Gonzalez, Sharaya sang “Stir Fry” and beat Lil Bri, Jesse belted out “You Are So Beautiful” and eliminated Ebon Lurks, and Whitney performed “(You Make Me Feel Like) A Natural Woman” and sent home Matt Bloyd. Now it’s time to find out whether the current members of “The Four” can all hold their chairs again for the second week in a row.

8:05 p.m. – Jesse, James and Whitney opened up the show with “The Way I Are” with a guest appearance from the song’s original artist, Timbaland. Sharaya missed the performance because she’s on vocal rest to preserve her voice, but she will be defending her seat tonight. Of the three that did perform, Whitney looked like the star.

8:12 p.m. – Tonight’s first challenger is Felix Thompson. He felt like a black sheep growing up, but after moving to Atlanta his music career began to take off. Now he is ready to take it to the next level. Felix will be performing “Can We Talk” by Tevin Campbell. He’s got a smooth voice that would sound great on record. More importantly, he’s got a unique tone. Felix doesn’t have to overdo vocal runs. The timbre and range of his voice are effortless and he’s got great stage presence. He’s got to be put through for a challenge!

8:15 p.m. – Khaled said it felt like an “act” and Meghan agreed. She was laughing when Felix laid down on the stage. These two are ridiculous! He’s got the most unique voice I’ve heard this season. Diddy didn’t like the stage antics, but did comment that Felix has a great voice. What’s the verdict? Yes! We have a challenge. I’m so glad the judges got it right.

8:23 p.m. – Felix has chosen to challenge Jesse. Thank you Felix! Please take him down. Jesse will be performing first. Which song will he bless with his manufactured, forced rock vocals tonight? After my snide remarks, Jesse told a heartbreaking story about the death of his mentor. Now I feel like a jerk. Maybe he can prove me wrong. He’s singing “Hold On, I’m Coming Home” by Sam & Dave. Nope! Jesse seems like a nice guy, but he still sounds awful. If there was an actual rock singer on the judging panel they might be able to critique him correctly.

8:25 p.m. – Felix is singing “That’s What I Like” by Bruno Mars. Felix isn’t a powerful vocalist, but his tone is what makes him stand out to me. He threw in a back flip for good measure. It’s difficult to make a Bruno song your own and that’s exactly what Felix has accomplished. Felix deserves the win.

8:28 p.m. – Khaled liked Felix’s performance but isn’t sure he can make records with him. He feels like Jesse defended his seat. Diddy appreciates Felix’s showmanship. He’s concerned about Jesse taking the same approach to every song. After the audience vote…Jesse has defended his seat once again. What a terrible audience!  Following the vote, Diddy got honest and said based on what he’s seen he wouldn’t sign Jesse. I’ve been saying that for weeks. Next!

8:38 p.m. – Tonight’s second challenger is Alma Lake. She grew up in a Latin family and is hoping to spice up the competition. She’s also worked as a model, but her passion is singing and songwriting. She’s got a fun personality, but let’s see if she can sing. Alma is sing “Ex’s & Oh’s” by Elle King. Her singing voice is nothing like her speaking voice. First of all, she’s easier to understand and she’s actually got a sexy, husky tone. I like her, but I can already see the judgmental eyes of the Four looking down on her.

8:40 p.m. – Diddy likes her freedom and her performance style. Meghan said she couldn’t beat anyone in the Four. Khaled disagrees with Meghan and thinks she could go toe-to-toe with some of them. Will Meghan screw Alma over? Yep. Khaled and Diddy voted her through but Meghan said “No.” Meghan is lame. An argument ensued before Alma disclosed she would have sung “Alive” by Sia. Khaled begged to give Alma a chance to sing the song, but Diddy said those aren’t the rules. Boo!

8:50 p.m. – Tonight’s third challenger is Ali Caldwell and I recognize her from “The Voice” so I already know she can SANG! After a nervous breakdown at the age of 23 she decided to pursue music full time. She’s been touring for years, but of course made no mention of her successful run on “The Voice’s” Team Miley Cyrus. Tonight she’s singing “Tell Me Something Good” by Chaka Khan. Ali is putting a lot of soul and range into this performance, but it’s a terrible audition song. Regardless, Meghan is freaking out. She clearly has chops twice as powerful as anyone currently in the Four. They should all be terrified.

8:52 p.m. – Meghan is speechless and said her cheeks are sore from smiling. Diddy simply asked “Are you ready to eat?” The panel decided Ali deserves to challenge one of the Four.

9:00 p.m. – Ali has chosen to challenge Whitney. In defense of her seat, Whitney will perform “If You Don’t Know Me By Now” by Patti LaBelle. Whitney has great stage presence and range but there is zero power behind her voice. She looks more like a star than sounds like one tonight. She’s my favorite of the current Four, but I’m not attached. Let’s see what Ali brings.

9:03 p.m. – For her chance at a seat, Ali is singing “Set Fire to the Rain” by Adele. She starts off the first verse quietly before belting out the chorus with full power and range. Let’s be honest, the woman has chops. She deserves to win and Whitney looks gutted as she observes the absolute carnage Ali has left from slaying everything on the stage.

9:05 p.m. – Diddy wishes he had a special override to keep both of them. He thought fear got the better of Whitney on this battle and Ali came to eat. Meghan said it was the toughest challenge they’ve had. But what does the audience think? Ali has dethroned Whitney and is now my favorite member of the Four. Whitney was sent home in tears, but she had a nice run. Khaled encouraged her to never give up.

9:15 p.m. – The next challenger is Dian Rene, a Cuban pop singer who was originally trained in opera. He actually kind of looks like James so it would be funny to watch them face off. Dian has had a tough go of it in America, working as a cook in a restaurant while keeping his dream alive. He is performing “Hero” by Enrique Iglesias. What a great song choice. Meghan shed a tear about 10 seconds in. As Dian hit the chorus he slowly removed his jacket and hung it up on the mic stand. What a pro. I love this kid.

9:17 p.m. – Khaled loved Dian’s song choice and respects his determination. Meghan said there is something sweet about him and felt his passion. After the panel voted, Dian was given a chance to challenge. Eat! Eat! Eat! Dian has decided to challenge James. This will be a dog fight.

9:25 p.m. – Up first, James is performing “Human Nature” by Michael Jackson. He’s got the voice and charisma to pull this off. I like the way he’s showing off all aspects of his range this week and he’s definitely killing it. Halfway through the performance Diddy stood up to applaud.

9:27 p.m. – Dian followed up that up with Marc Anthony song he performed entirely in Spanish. He’s got some serious hip action going on and Meghan is loving it. He may not have the effortless range of James, but Dian has serious stage presence and the crowd is going nuts! This could go either way.

9:33 p.m. – Diddy asked Dian to give him salsa classes regardless of how things go tonight. He then complimented James for showing the audience a whole new side of him. But who does the audience think deserves a seat in the Four? The winner is…James! That was a tough battle but James holds onto his seat another week.

9:40 p.m. – The next challenger is Brennan Villines. He’s been taking piano lessons since the age of three. After leaving Kentucky for Memphis, he fell into a drug addiction and contracted HIV. Now he is five years sober and has a new lease on life. He’s performing “I’m Gonna Be” by the Proclaimers. Brennan’s got a lot of talent, but he’s doing way too many vocal tricks with his voice. He needs to tone it WAY down. Meghan loved his performance and he gave her goosebumps. Khaled said he “tore it down.” I personally don’t think Brennan deserves to challenge. But what does the panel think?

9:50 p.m. – The panel has decided Brennan deserves to challenge! Since Sharaya J is the only member of the Four available to compete, we are about to see the weirdest battle of the season. The piano man vs. the rapper. Let’s go! Sharaya J is up first performing “Go Raya” by Sharaya (herself). After a week of vocal rest, she seems to be in good health. She’s still got the stage presence, but I’m not sure this is going to hold up. Lucky for her, Brennan is the weakest challenger of the night.

9:53 p.m. – For his second song, Brennan is singing “Let it Go” by James Bay. I find his vocal style completely overdone. It’s difficult to listen to. He tries to pull out every vocal trick in the book and then just holds one note as long as he can. I’d prefer Sharaya stay.

9:59 p.m. – The winner of the final challenge is Sharaya! James and Sharaya have both held on for four weeks. Impressive! Jesse defended his seat once again and Ali was the only performer to break through. That’s a wrap!