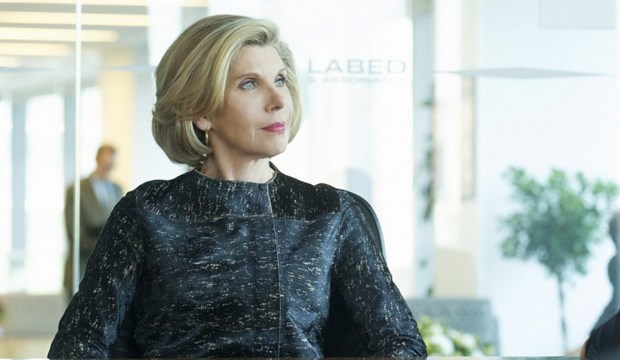 Robert King and Michelle King, creators of “The Good Wife” and co-creators of its spin-off “The Good Fight,” have never shied away from tackling topical and controversial issues on their series. In the most recent installment of “The Good Fight” that streamed on CBS All Access on April 15, though, they may have undertaken their most shocking topic yet: impeaching President Donald J. Trump. Penned by Tegan Shohet, “Day 450” is a bold and ideologically balanced hour of television that deserves attention from the Emmy Awards.

In the episode, political consultant Ruth Eastman (Margo Martindale, reprising her role from the final season of “The Good Wife”) approaches law firm Reddick, Boseman & Lockhart on behalf of the Democratic National Committee to brainstorm legal arguments that could be used to impeach President Trump if and when Democrats gain control of Congress. Each of the partners argues for a different legal justification: Diane (Christine Baranski) makes the case that President Trump should be tried for obstruction of justice, while Adrian (Delroy Lindo) favors pursuing his potential violations of the emoluments clause, and Trump-supporter Julius (Michael Boatman) offers counterarguments. When Ruth asks the team to decide on one approach, Liz (Audra McDonald) drops a bombshell, claiming that during her time at the Department of Justice, she worked on building a case against Trump on a number of salacious offenses that they could resurface. When Adrian questions whether Liz has made up these claims, she counters that it doesn’t matter because impeachment needs to be “shameless,” that the “new rules” of politics no longer care about the truth, and that you either attack or backtrack.

As the episode continues and Reddick, Boseman & Lockhart advances with their “audition” to become the firm contracted by the DNC for the job, it becomes increasingly clear that Tegan Shohet should receive major kudos for his script, not only because of its timeliness and its capturing of the show’s characteristic inter-office machinations, but also because it toes a relatively neutral political line. Even though the premise of the episode may on the surface alienate Trump supporters, Shohet keeps the debates about impeachment politically balanced and depicts both sides as equally overzealous in their attacks and defenses. As Robert King told The Washington Post, “‘It’s comical sometimes how intense the conversation can get… We wanted to satirize that while [being realistic] about how Democrats, in our imaginations, are preparing to prosecute it.’” Although the Kings did not pen the script, Shohet executed this vision perfectly and Emmy nominators should hopefully take notice. Even though Shohet would be a first-time Emmy nominee, the Kings have a track record at the Emmys and in the Writing category in particular, earning a nomination for the series premiere of “The Good Wife” in 2010 and a bookend bid for the series finale in 2016.

Although truly an ensemble showcase, “Day 450” allows a few cast members individual moments to shine. Christine Baranski, in particular, gets three great scenes throughout the episode. Convinced by Liz’s legal approach to impeachment, Diane argues that when they go low, we need to go lower, delivering rousing speeches where she assails the current political climate and the corruption of our institutions, finally admitting that she keeps a firearm in her desk. Later, when Adrian checks in on Diane, he asks if her diatribes were just for show to impress Ruth. Though she confesses that yes, it was a performance, Baranski silently conveys just how much Diane meant every single word. In “Day 450” alone, not to mention the six second-season episodes preceding it, Baranski stakes a strong claim for an Emmy nomination in Drama Lead Actress. Audra McDonald also does her best work on the series to date in this episode as Liz comes up with the winning strategy, which lands her alone a spot on the “Avengers”-esque legal team Ruth Eastman has assembled.

If any actress happens to land an Emmy nomination specifically for “Day 450,” though, it will be Margo Martindale. Few actresses today seem as beloved by the Television Academy as Martindale, who has nabbed five nominations over the past seven years, winning three times (“Justified,” 2011; “The Americans,” 2015, 2016). Even though Martindale didn’t earn an Emmy bid for this same role when she appeared on “The Good Wife,” for which she had to contend in the Drama Supporting Actress category based on the number of episodes in which she appeared, she could easily land a nomination for “The Good Fight” in Drama Guest Actress, where she earned four of her five nominations and both of her wins for “The Americans.” The marvel of Martindale’s performance in “Day 450” is her ability to bring such ambiguity to a role that could easily be played straight. Even though Ruth wants to find the best attorneys and legal advice for the DNC, the audience never knows if she’s being forthcoming or manipulative, an aura of mystery that Martindale bring out from behind her indefatigable charm.

“The Good Fight” could also earn an Emmy nomination for “Day 450” in the totally unexpected category of Outstanding Music and Lyrics. The episode concludes with an animated short, created by Head Gear Animation, in the style of “Schoolhouse Rock” over which a song written and performed by Jonathan Coulton plays. The catchy tune, which emphasizes in its refrain that “nobody’s above the law,” could earn Coulton his first Emmy nomination to accompany his 2018 Grammy nom for Best Recording Package for his album “Solid State.” Though the Emmy for music and lyrics tends to go to a comedy or variety series or even an awards ceremony, Coulton, who previously collaborated with the Kings on their short-lived series “BrainDead,” penned a song as funny as if it were written for a much lighter series without sacrificing the satirical bite or observation of the preceding hour.