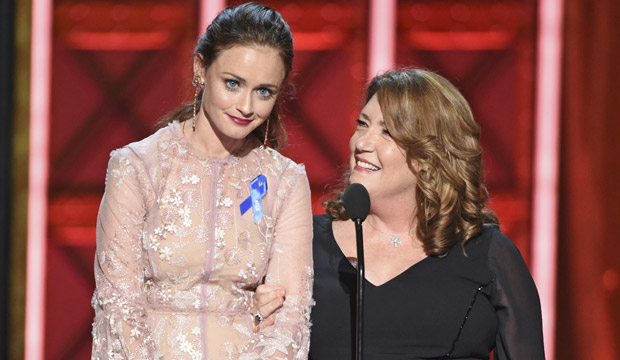 Last year “The Handmaid’s Tale” won eight Emmys and had three of its actresses take home trophies in various categories. Elisabeth Moss won Best Drama Actress, Ann Dowd took Best Drama Supporting Actress and Alexis Bledel won Best Drama Guest Actress. Moss currently sits on top of Gold Derby’s lead actress chart and will surely earn another nomination for Season 2. Where it gets more interesting is in the supporting actress category where the Hulu hit could possibly receive as many as four nominations.

SEE2018 Emmys eligibility period ends May 31, unless you’re ‘Westworld,’ ‘The Handmaid’s Tale’ and …

Dowd was a surprise winner last year for her role as Aunt Lydia the brutal woman in charge of the handmaids. She is currently in first place on Gold Derby’s charts and will likely be nominated again. Samira Wiley, who plays Offred’s friend Moira, was also nominated as a supporting actress last year but she has been featured in fewer episodes this season so she will be competing as a guest actress where she is currently in second place on our charts behind Diana Rigg (“Game of Thrones”).

Bledel is in the reverse position of Wiley. This year she has appeared in too many episodes to qualify as a guest actress so she will be competing up in the supporting race. She is currently hanging on to sixth place on Gold Derby’s charts and will likely be nominated again, but can she take down Dowd for the win?

That leaves two more potential nominees for Best Drama Supporting Actress. Yvonne Strahovski has been causing quite a buzz in Gold Derby’s TV forums as Serena Joy, the Commander’s wife for whom Offred is carrying a child. Starhovski has had quite a season with moments of overt cruelty, kindness and humiliation. Forum posters seem a bit outraged that she hasn’t risen above eighth place on our charts. Many posters are even pulling for Strahovski to win the category.

The fourth supporting actress submitted by the show is Madeline Brewer, who plays Janine, one of the other handmaids. Last year she had her eye removed as punishment for defiant behavior and has now become almost childlike and innocent after her punishment. Brewer has had some strong moments this season, particularly when her baby was dying; Janine being allowed to hold the child and show it love seemingly brought it back to life.

SEEAlexis Bledel in ‘The Handmaid’s Tale’ season 2: First look photo of the Emmy winner as Emily/Ofglen

The four supporting actresses face strong competition from a variety of other shows such as “Game of Thrones,” “Westworld” and “This is Us” but it is possible that a number of “Handmaid’s” actresses could make the race. In the past Emmys have occasionally let one show dominate a whole category. In 1982 all five nominees for Best Drama Supporting Actor were from “Hill Street Blues.” Michael Conrad won and the other nominees were Taurean Blacque, Charles Haid, Michael Warren and Bruce Weitz.

Prior to that in 1976 the category Best Lead Actor for a Single Appearance in a Drama or Comedy Series was made up of four actors from the landmark miniseries “Roots.” The nominees were John Amos, Levar Burton, Louis Gossett Jr. and Ben Vereen, with Gossett emerging as the winner. In recent years “The West Wing,” “Angels in America” and “The Normal Heart” all managed to have four nominees in one of the acting categories.