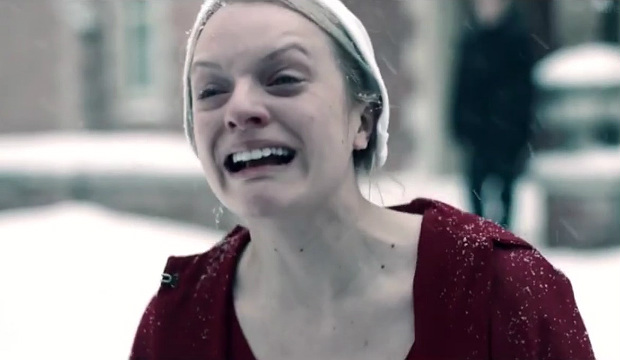 The June 20 episode of “The Handmaid’s Tale” is arriving just in time for the Emmys. Although there are another three episodes in the second season after it, Episode 10 is the last one that is eligible for the 2018 Emmys because it is the final “hanging episode” that is coming out while voting for nominations is open. Gold Derby’s aggregate predictions favor Elisabeth Moss for a repeat Best Drama Actress award for her role as June “Offred” Osborne and this episode, titled “The Last Ceremony,” will probably be the one that clinches it.

What June goes through in “The Last Ceremony” is harrowing, from the namesake scene to being “faced with an unexpected reunion,” as teased by Hulu in their log line for the episode. It is the stuff that Emmy submissions are made of, as Moss should know, as her material in it is reminiscent of what she entered last year: “Night,” which was also the 10th and last eligible episode of its season. That finale climaxed with June being driven to view her kidnapped daughter and being heartbroken as she is being restrained from interacting with her.

“The Handmaid’s Tale” is on the ballot in most categories for the season premiere “June,” but “The Last Ceremony” is additionally submitted for Best Drama Editing. Although it is the third consecutive episode that does not intercut flashbacks, “The Last Ceremony” is fitting as a submission because it is such a momentous and unsettling episode — the biggest tearjerker since at least the premiere. What is more likely than its linear narrative to hinder a nomination for editor Chris Donaldson is the late release. “The Last Ceremony” will be available for streaming on June 20, nine days after 15 days of voting began. Episodes that air in June are not even normally eligible until the following Emmys, but “The Last Ceremony” and the two June episodes before it qualify for the 2018 Emmys as hanging episodes; the remainder of the season, which concludes July 11, will be eligible in 2019.

In the age of DVRs and streaming, it is questionable that voters would normally see “The Last Ceremony” before returning their ballots, but Hulu mailed all 10 eligible episodes from “The Handmaid’s Tale” on DVD to voters last month. This strategy might have facilitated the Best Drama Directing nomination last year for Kate Dennis’s work on the first season’s penultimate installment “The Bridge,” which was another hanging episode.

“The Last Ceremony” is not on the Best Drama Directing ballot because director Jeremy Podeswa has instead submitted the seventh season finale of “Game of Thrones,” for which he has already received a Best Drama Directing nomination from the Directors Guild of America. The directing and technical direction categories are the only at the Emmys in which individuals are ineligible for multiple nominations or submissions. Podeswa was nominated in 2015 for “Game of Thrones,” 2011 for fellow drama “Boardwalk Empire” and 2011 for miniseries “The Pacific.” Last week’s “Smart Power” was Podeswa’s debut on “The Handmaid’s Tale.”

SEEour interviews on the red carpet for “The Handmaid’s Tale.”