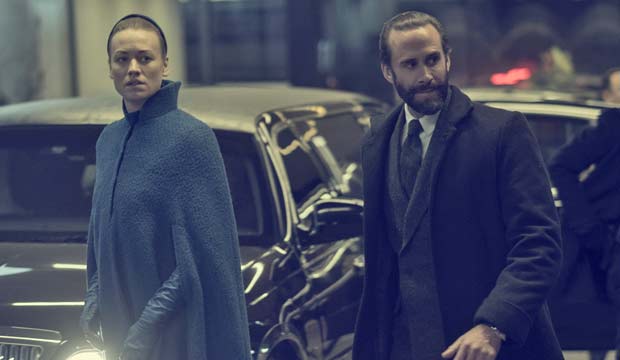 Hulu made history last year by becoming the first streaming service to win Best Drama Series at the Emmys for “The Handmaid’s Tale.” This adaptation of Margaret Atwood‘s dystopian novel picked up eight trophies in total, including Best Drama Actress for Elisabeth Moss, Best Drama Supporting Actress for Ann Dowd and Best Drama Guest Actress for Alexis Bledel. Can it repeat that success with season two? Gold Derby recently spoke with stars Yvonne Strahovski, Joseph Fiennes, and O-T Fagbenle, as well as Emmy-winning cinematographer Colin Watkinson and music supervisor Maggie Phillips. Scroll down and click on their names below to be taken to their full interviews.

The show imagines a future in which fertile women are forced to become concubines for wealthy men under a theocratic dictatorship. Fiennes plays Fred Waterford, a high-ranking official in this regime who is domineering in his household, but less secure when it comes to the hierarchy of other powerful men.

That dichotomy between Fred’s power over women and his fight to maintain his status among men was especially interesting to the actor. He feels the show inspires “a fascinating conversation about male dominance” and how the “male psyche” functions — or perhaps malfunctions — when “his masculinity is challenged.”

Fiennes previously earned BAFTA and SAG nominations for his breakthrough performance in “Shakespeare in Love” (1998). Now he competes on the Emmy ballot this year for Best Drama Supporting Actor.

Strahovski plays Waterford’s infertile wife, Serena Joy, who takes her anger and resentment out on their handmaid June (Moss). The actress is excited by how relevant to contemporary life the show remains in season two. “It’s this amazing, magical alignment with the real world and what has been going on,” she explains. “It’s empowering and amazing to be part of something like this that has spoken to so many people on this level. We’re inspiring people. It feels good to be a part of something that has been a little bit of the contribution behind #MeToo and #TimesUp, the resistance, the marches … It’s very special.”

For Fagbenle, who plays June’s husband Luke, there was a clear distinction in how he portrayed his character this season compared to last season. “There was this event, this line in his life that created a before and after, and that was obviously when he lost his family and was made an immigrant, a refugee to Canada,” he says. “So this really examines what that does to the psyche, how deflating that can be, how numbing that can be, to have the things that you love the most taken away from you.”

Strahovski, Fiennes, and Fagbenle were all nominated together at the SAG Awards earlier this year as members of the “Handmaid’s Tale” ensemble cast. Click on any name below to be taken to their full interview: