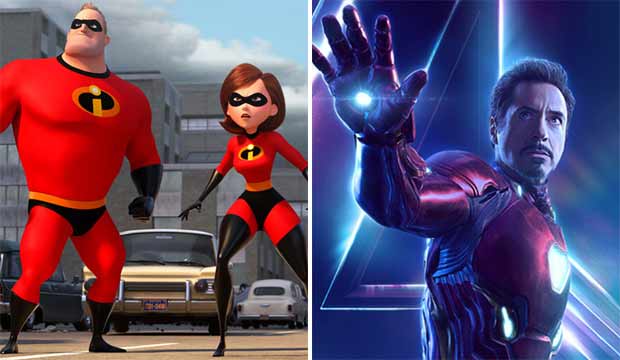 It’s been a good week for superheroes at the box office, which almost goes without saying at this point. “The Incredibles 2” opened on June 15 as already the fourth superhero film of 2018 so far, but the first that isn’t based on Marvel Comics characters. The Disney/Pixar sequel to the Oscar winning “The Incredibles” from 2004 broke records, opening with a remarkable $180 million in the US, the biggest debut ever for an animated film and the eighth biggest debut for any film in history. Incidentally, 6 of the top 10 biggest openings now belong to superheroes, and 9 of the top 10 belong to Disney.

The opening weekend total for “The Incredibles 2” is already 69% of what the original film grossed over its entire run at the domestic box office ($261 million). That film accumulated a total of $633 million worldwide. Overseas, “Incredibles 2” made $51.5 million in its debut, but the film has only opened in about a quarter of foreign markets, so that total is likely to climb dramatically in the coming weeks.

Meanwhile, “Avengers: Infinity War” took in another $5.3 million for eighth place. That brings it to $664 million in the US. But in the last week the film achieved a huge milestone: it became only the fourth film in history to reach the $2 billion mark in worldwide ticket sales. At $2.020 billion, it ranks fourth among the all-time biggest moneymakers, behind “Avatar” ($2.788 billion), “Titanic” ($2.187 billion), and just $48 million shy of “Star Wars: The Force Awakens” ($2.068 billion).

Elsewhere on this week’s box office chart, last week’s number-one “Ocean’s 8” dropped to second place with $19.5 million for two-week a domestic total of $79 million (against a $70 million production budget). The comedy “Tag” debuted in third place with $14.6 million, while the new crime thriller “Superfly” made $6.3 million.