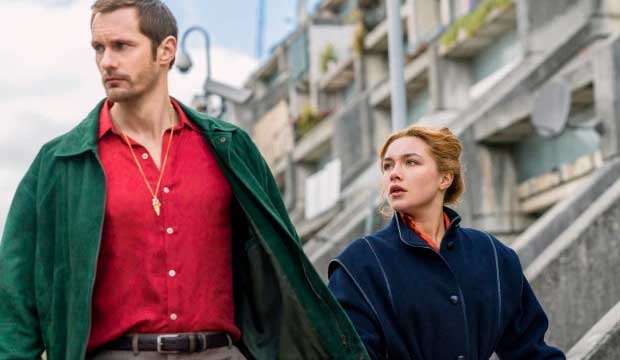 The London Film Festival isn’t strictly all about films, apparently. In between the slew of movies, LFF managed to sneak in two episodes of a brand new television series: “The Little Drummer Girl.” At the helm is Chan-wook Park, the acclaimed South Korean filmmaker who did well with various critics groups with “The Handmaiden” several awards seasons ago.

This BBC/AMC miniseries is described in the official program thus: In 1979, Charlie Ross (Florence Pugh), an idealistic young actress meets a mysterious stranger called Becker (Alexander Skarsgård) while on holiday in Greece. She is offered a role in the ‘theatre of the real’, quickly becoming dangerously immersed in a complex plot masterminded by Kurtz (Michael Shannon), an Israeli spymaster.

This follows on the success of “The Night Manager,” another spy thriller adapted from a John Le Carre novel. That show, which was also a BBC/AMC co-production, extremely well with the holy trinity of judges: audiences, critics, and awards groups. Everyone loved it. It even won a trio of acting awards at the 2017 Golden Globes for lead Tom Hiddleston and supporting players Hugh Laurie and Olivia Colman.

While “The Little Drummer Girl” starts off slower than “The Night Manager,” which was full throttle immediately and drew you in within seconds, it does follow a similar pattern. A team of spies and special agents recruit a special someone to join their team and act as a character to infiltrate the enemy gang. Here, the wonderful Florence Pugh is at the center of the action. Hers is a performance full of verve with a certain boisterousness that was refreshing to watch. Opposite her, Alexander Skarsgard was stoic, mysterious, cool, near-silent. The two worked well opposite one another.

However, the star of the show, for this writer, is two-time Oscar nominee Michael Shannon. As with everything he does, you only see the character he is playing. In this instance, we are watching an Israeli spymaster at work. His accent, his mannerisms, the hunger in the characters eyes, it’s all brilliant.

“The Little Drummer Girl” debuts on the BBC in late October and on AMC in November, just in time for the Golden Globes. Will it fare as well as “The Night Manager” did? Be sure to check out how our experts rank this year’s Golden Globe contenders. Then take a look at the most up-to-date combined odds before you make your own Golden Globe predictions. Don’t be afraid to jump in now since you can keep changing your predictions until just before nominations are announced on Dec. 6.