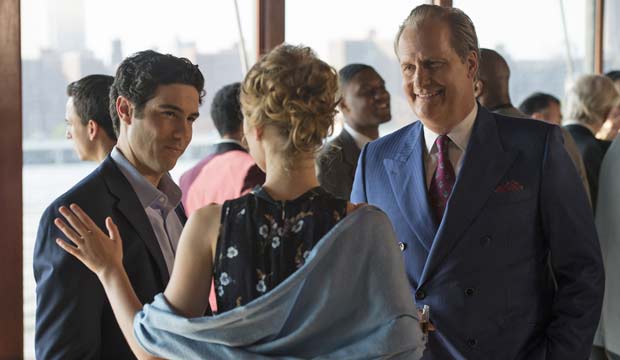 After making history last year by becoming the first streaming service to win Best Drama Series for “The Handmaid’s Tale,” Hulu has its sights set on another first: a Best Limited Series victory for “The Looming Tower.” Based on Lawrence Wright‘s Pulitzer Prize-winning nonfiction book, the show recounts the events leading up to the al-Qaeda terrorist attacks on September 11, 2001. Gold Derby spoke with stars Jeff Daniels, Peter Sarsgaard, Bill Camp, and Tahar Rahim, showrunner Dan Futterman, executive producer Wright, composer Will Bates, visual effects supervisor Aaron Raff, and visual effects producer Steven Weigle. Scroll down and click on any name below to be taken to their full interviews.

Daniels plays John O’Neill, the real-life FBI agent who investigated al-Qaeda and Osama bin Laden in the years leading up to the attacks. The actor hadn’t read the book and didn’t know the specific historical details before taking part in the series, but when he read the script he felt it was “an important story … I was fascinated by this whole lead up to 9/11 and how it came to be, how it could have possibly been prevented.” Daniels previously won an Emmy as Best Drama Actor for “The Newsroom” (2013), competing again for that role in 2014 and 2015.

SEE Emmy race for Best Limited Series is a three-way race, according to editors: ‘Versace’ vs. ‘Godless’ vs. ‘The Looming Tower’

“I was in New York on 9/11. I was at West Broadway and Canal Street, and that time will always be a very emotional time to me,” reveals Sarsgaard, who plays CIA analyst Martin Schmidt, a composite of real-life figures featured in the book. Schmidt is a hawk when it comes to international conflicts, shows no concern for any civilian casualties who aren’t American, and stubbornly refuses to collaborate with his FBI counterparts. He’s “incredibly myopic,” but “if you think you’re a genius it becomes very difficult to trust other people.” Sarsgaard previously reaped a Golden Globe nomination for Best Film Supporting Actor for “Shattered Glass” (2003), but he hasn’t competed at the Emmys yet.

Camp plays a composite character as well, FBI veteran Robert Chesney. He says, “There was a liberty of having a larger landscape to work with” when it came to playing a character who combined multiple experiences and points of view. “It was a great source to be able to combine all of these things rather than trying to depict just one character.” At first “it was challenging to find who Bob Chesney was, but ultimately that challenge faded and the experience became exhilarating.” Camp received his first Emmy nomination last year for Best Movie/Mini Supporting Actor for “The Night Of,” and he’s a contender in that same category for “Looming Tower.”

“If you don’t learn about your history, you’re doomed to repeat it,” states Rahim, who like Daniels plays a real-life FBI agent, Ali Soufan. Rahim had the opportunity to meet Soufan before portraying him, and he wanted to get to know him “just like two friends, to understand more about who he is in his private life so I could bring this to the character.” He was especially impressed by Soufan’s dedication at such a young age. He was in his 20s when he joined the FBI, while Rahim remembers his own 20s as “hanging out with my friends, having fun, parties, restaurants. I was not even aware about the fact that we could do something to change the world.”

For Futterman, adapting the book came from a place of deep passion and frustration. “This is what happens when government agencies don’t work together,” he explains. “This is what happens when people let their own egos get ahead of their duty to the country that they’re working for.” A two-time Oscar nominated screenwriter  — Best Adapted Screenplay for “Capote” (2005) and Best Original Screenplay for “Foxcatcher” (2014) — Futterman co-created the series with Wright and Oscar winning documentarian Alex Gibney (“Taxi to the Dark Side”).