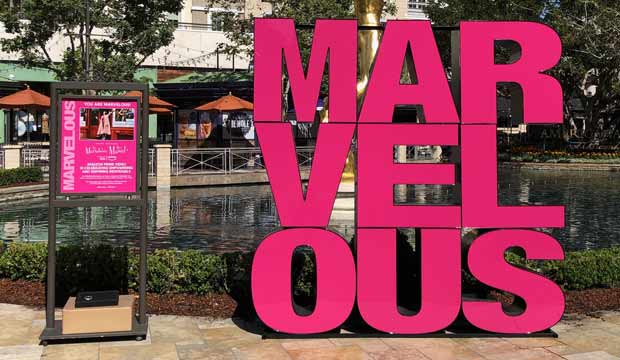 You look “Marvelous”! That’s what “The Marvelous Mrs. Maisel” is saying to women-led companies and organizations in New York and Los Angeles as part of its latest Emmy campaign. Amazon has created 11 installations, each with an eight-foot display of block letters spelling out “Marvelous” in front of businesses and locations representative of female empowerment. Those installations went up on June 12 and will remain up for a week. That coincides with Emmy voting, which started on June 11 and ends on June 25.

“The character Midge Maisel is a strong, talented woman who strikes out on her own to forge a new path, and in the spirit of ‘The Marvelous Mrs. Maisel,’ we are excited to shine a light on other fantastic, entrepreneurial women,” said Amazon’s head of marketing Mike Benson in a statement. “We hope that this campaign will inspire others to find their unique voice.”

The women being spotlighted by the campaign are Cecile Richards, the former president of Planned Parenthood; Lizz Winstead, the creator of “The Daily Show” and founder of Lady Parts Justice League; Whitney Wolfe Herd, founder of the female-driven dating app Bumble; Reshma Saujani, who strives to close the gender gap in tech as the founder of the nonprofit Girls Who Code; Danielle Weisberg and Carly Zakin, founders of theSkimm; Katie Rosen Kitchens, the founder of FabFitFun; Payal Kadakia, founder of ClassPass; Suzanne Goin and Caroline Styne, founders of the hospitality company the Lucques Group; Florence Shin and Athina Wang, founders of Covry; and Lauren Paul and Molly Thompson, founders of the Kind Campaign.

“Mrs. Maisel” is a period comedy that follows the life of its title character (played by Rachel Brosnahan), who embarks on a stand-up comedy career in the 1950s after her husband suddenly leaves her. It was created, written, directed and produced by another accomplished woman, Amy Sherman-Palladino, who previously created the series “Gilmore Girls.”

If you live in New York or LA and would like to see the “Marvelous” installations, they can be found in the following locations:

– Westfield Century City
– The Grove
– The Americana at Brand
– 9200 Sunset Blvd.
– Santa Monica Pier
– The Four Ladies of Hollywood Statue adjacent to the Hollywood Walk of Fame
8500’s The Larder at Burton Way (Caruso’s luxury residential landmark which is also at 8500 Burton Way at the intersection of La Cienega will be turning its iconic cloud light pink for the campaign)
– FabFitFun Offices