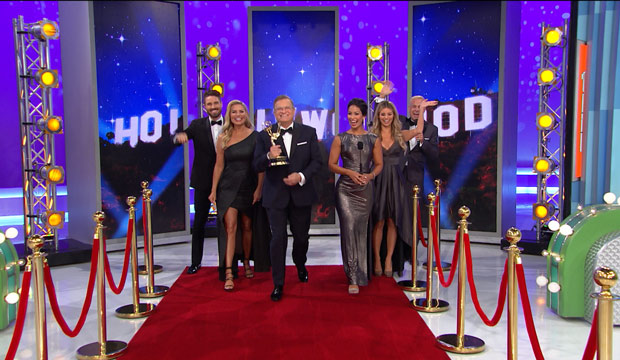 As a way to celebrate its 2018 Daytime Emmy victory for Best Game Show, “The Price is Right” will host an exclusive after-party for its Season 47 premiere, airing Monday, September 17 on CBS. Gold Derby was invited to a special taping of the episode that begins with host Drew Carey, announcer George Gray and models James O’Halloran, Rachel Reynolds, Manuela Arbelaez and Amber Lancaster walking the red carpet while holding their shiny new statuette. The studio audience also gets into the after-party mindset by dressing up in fancy suits and glamorous dresses. Watch a fun video clip below.

“Here’s our Emmy!” Carey proudly announces at the top of the show. “Everybody welcome to Season 47 of ‘The Price is Right.’ We’re all dressed up. The audience is all dressed up. You know why? Because we’re celebrating our Emmy today. If it wasn’t for amazing support of fans like you we wouldn’t have won this Emmy for Outstanding Game Show. So to celebrate our Emmy win, we’re throwing a really great Hollywood after-party, ‘Price is Right’ style.”

“It’s so crazy!” producer Mike Richards tells Gold Derby backstage in the holding area for all of the dozens of iconic “Price is Right” games (watch below). “As a kid I would watch the Oscars, the Emmys and literally pretend I was there and pretend I was winning. I would pull up in a Big Wheel and get out like I was going to the red carpet. So to actually be up there and thanking my wife and my kids and the entire crew and staff of ‘The Price is Right’ is really one of the coolest things ever.”

As for throwing a red carpet shindig during the Season 47 premiere to celebrate the show’s success, Richards reveals, “So we had this idea before we won the Emmy last season and we thought if we win — which you don’t really ever assume you’re gonna win — we should do like an Emmy after-party. [We’ll] give away ridiculous prizes, everybody on the cast will dress up, and then we have the audience dress up. The way we celebrate is by thanking our fans, without which we wouldn’t be here at all.”

SEEDaytime Emmys 2018: ‘Days of Our Lives’ is the big winner of the night with 5 awards, including Best Drama Series

We also got to chat with the show’s one and only male model, James O’Halloran, on how he originally got cast on “The Price is Right” (watch below). “So there was a whole audition process they turned into a web series. I think you can still see it online actually. I went in the first day knowing nothing about the rest of it. I had to model a bass guitar and they were like, ‘We’ll have you back again tomorrow.’ Then it came down to a vote and somehow I got through.” He jokes, “Paid off the right people, and here I am!”

O’Halloran beams when chatting about the show’s Emmy victory, explaining, “It was extremely exciting, especially because the episode that was actually submitted, that we won from, I had family members here during it. It was just this crazy episode where there was a bonus round for people on the wheel and people kept on winning.” He adds that his personal favorite game on “The Price is Right” is Rat Race, because “it’s got all the elements, it’s got a good bit of guessing in it, and then just the randomness of the race itself.”

When “The Price is Right” debuts its 47th season on CBS, you can definitely expect some huge prizes on the line for the lucky contestants who are told to “Come on down!” Tune in Monday, September 17 to see how it all plays out. Might the series already be on track to win its ninth Emmy for Best Game Show in 2019?

'The Masked Singer' spoilers: The Llama is ...

'The Masked Singer' spoilers: Who is the Llama?

Mike Richards ('The Price Is Right,' 'Let's Make a Deal') on competing with himself at Daytime Emmys…

Mike Richards ('The Price Is Right' executive producer): 'Tapings are a blast' for long-running CBS game…