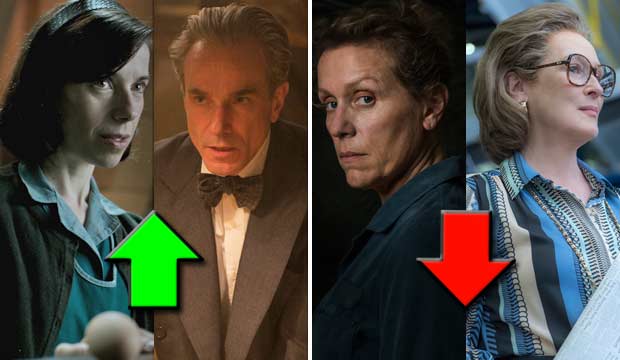 After months of anticipation, the 2018 Oscar nominations were announced, and they included their fair share of surprises. So who’s up, who’s down, and who’s about the same in the race for Best Picture now that we know who made the cut?

“The Shape of Water” — It’s the most nominated film of the year with 13 bids. We were expecting it to have the highest total, so that’s no surprise. It even under-performed relative to our expectations since we thought it would tie the all-time record with 14. But the only category it missed was Best Visual Effects. So when you consider some surprise inclusions and exclusions for other films, that makes “Shape” the only contender this year nominated in all of the categories that usually signal a Best Picture winner: directing, writing, editing, and acting. This is the best possible result for the film after it missed out on an ensemble cast nomination at the SAG Awards.

“Phantom Thread” — At best, we had been looking at “Phantom Thread” as a possible spoiler for Best Actor thanks to Daniel Day-Lewis‘s farewell performance in the leading role, but even that was starting to seem optimistic. Boy were we wrong. Instead of the three nominations it was expected to get, it received six. And those three surprise noms were all in top categories: Best Picture, Best Director (Paul Thomas Anderson), and Best Supporting Actress (Lesley Manville). Is it positioned to take down “The Shape of Water” for Best Picture? Maybe, maybe not (it has no writing or editing noms), but it’s in the conversation in a way it hasn’t been since before it was released.

“Three Billboards Outside Ebbing, Missouri” — This controversial film has to hope for some of that “Argo” magic. While it’s the third most nominated film of the year with seven bids, it missed out on the single most important category it needed to signal a likely Best Picture winner: Best Director (Martin McDonagh). “Argo” showed that you can still win Best Picture without that category, but “Argo” had an overwhelming show of support elsewhere that “Three Billboards” hasn’t had thus far: Ben Affleck won the Golden Globe, Critics’ Choice, and DGA Awards for Best Director, and the film was also awarded by the Producers Guild. McDonagh has already lost the Globe and Critics’ Choice Award for directing to Guillermo Del Toro, and the Producers Guild just chose “Shape of Water,” so that already puts “Three Billboards” at a disadvantage.

“The Post” — After showing such promise early in the awards season with six Golden Globe nominations and eight Critics’ Choice nominations, the journalism drama came up short with just two Oscar bids: Best Picture and Best Actress (Meryl Streep). That makes it the least nominated film in the top category. Those nominations may turn out to be its only reward.

“Dunkirk” —Christopher Nolan‘s war movie has performed consistently throughout the awards season, earning about as many nominations as expected at pretty much every event — no more, no less. True to form, it was nominated for eight Oscars; that’s one less than the nine we were predicting, but like “The Shape of Water” the only category it missed was Best Visual Effects, which usually isn’t an indicator of Best Picture. Granted, it may still have trouble winning the top Oscar without support from the writers or actors branches of the academy, but perhaps slow and steady will win the race for this early frontrunner after all.

“Get Out” — We were predicting five nominations for this horror satire and it got the four most important ones: Best Picture, Best Director (Jordan Peele), Best Actor (Daniel Kaluuya), and Best Original Screenplay. Its only miss was Best Film Editing, which is significant because almost all Best Picture winners are at least nominated for their editing, but “Birdman” (2014) proved that you can still win Best Picture without it. So it’s not much worse off than it was going into the nominations, especially for an Oscar contender as unconventional as it is.

“Lady Bird” — We predicted it would receive five nominations, and that’s exactly what it got: Best Picture, Best Director (Greta Gerwig), Best Actress (Saoirse Ronan), Best Supporting Actress (Laurie Metcalf), and Best Original Screenplay. Like “Get Out” it doesn’t have a Film Editing nom, but we weren’t expecting one. This showing keeps it in the mix as a major contender to win Best Picture.