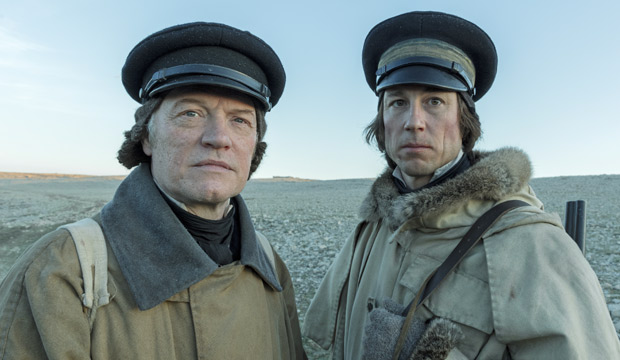 Is AMC’s limited series “The Terror,” based on Dan Simmons‘ best-selling novel about a lost expedition to the Arctic in the 1840s, being underestimated by our Emmy Experts? As of this writing only one pundit — Ben Travers (Indiewire) — predicts that the haunting program will become the cable network’s third Best Limited Series Emmy nominee after “The Night Manager” (2016) and “Broken Trail” (2007). But don’t forget, the Emmys have a love affair with AMC shows.

SEE Emmys 2018 exclusive: AMC and Sundance categories for ‘McMafia,’ ‘The Terror,’ ‘The Walking Dead’ and more

Over the past decade AMC has amassed a whopping 16 series nominations for “Mad Men” (2008-15), “Breaking Bad” (2009-10, 2012-14) and “Better Call Saul” (2015-17). With “Better Call Saul” sitting out this Emmy cycle because it didn’t air any new episodes, AMC fans within the TV academy may choose to shift their votes to its newest offering, especially one like “The Terror” that received a major Emmy campaign.

Ridley Scott served as executive producer of “The Terror” and recently spoke with Gold Derby about the “inordinately courageous” events that inspired the story. Showrunners David Kajganich and Soo Hugh also revealed to us that they pushed the characters to the limit as this was a sort of “slow-motion disaster.” The mammoth cast was led by Jared Harris as Francis Crozier, the captain of the ill-fated HMS Terror. Harris is a previous Emmy nominee for “Mad Men” in 2012 as a supporting actor, but now he’s contending as Best Movie/Mini Actor.

“I immediately knew that it was not just really well-written, but the thing that I appreciated about it was the patience and the restraint in the storytelling,” Harris explained during our recent interview. “I’m sure [Kajganich and Hugh] would’ve had quite a lot of pressure, since it was in the horror genre, to put a lot of different elements into that first episode. [But] they were very content with establishing a mood, a feel and a world, and introducing you to the characters, and not feeling pressure to suddenly start delivering genre beats to you.”

Other cast members submitted on the 2018 Emmy ballot are Ciaran Hinds as Franklin, Tobias Menzies as Fitzjames, Adam Nagaitis as Hickey, Paul Ready as Goodsir and Nive Nielsen as Lady Silence. As for the all-important directing and writing races, “The Terror” smartly chose to only submit one episode in each category: Episode 3 “The Ladder” for director Sergio Mimica-Gezzan and Episode 10 “We Are Gone” for writer Kajganich.