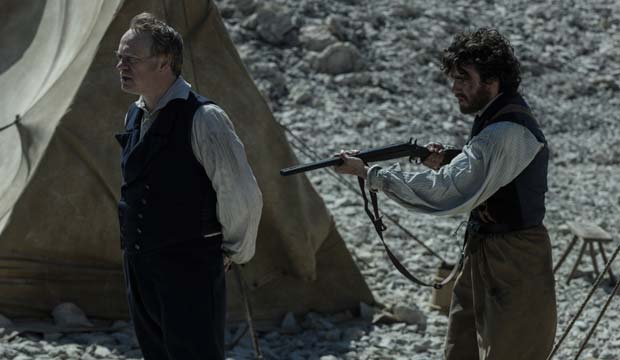 AMC is back in the Emmy race this year with its limited series “The Terror.” Based on the book by Dan Simmons, the show is a fictionalized account of a lost expedition to the Arctic from 1845-1848. Gold Derby recently spoke with star Jared Harris, executive producer Ridley Scott, and showrunners David Kajganich and Soo Hugh about their work. Scroll down and click on any of their names below to be taken to their full interviews.

Harris plays Francis Crozier, captain of the HMS Terror. In his research for the role, Harris discovered letters Crozier wrote before embarking on his journey. “It’s a really interesting snapshot of what this man’s state of mind was,” he reveals. “It was quite sad in that he had basically understood that at this point of his life he had nothing except … the Royal Navy.” Harris was previously nominated for Best Drama Supporting Actor at the Emmys for “Mad Men” (2012). For his role as Crozier this year he’s a contender for Best Movie/Mini Actor.

SEE Emmys 2018 exclusive: AMC and Sundance categories for ‘McMafia,’ ‘The Terror,’ ‘The Walking Dead’ and more

For creator Kajganich, the show was “the sort of story you don’t often get a chance to tell … where you have a group of characters” and “you put them in a slow-motion disaster.” Pushing characters to their limits gives you “a chance to unpack all of their attributes, all the facets of their personality, as the pressure just mounts and mounts.” Kajganich has also written screenplays for the films “The Invasion” (2007), “True Story” (2015), “A Bigger Splash” (2015), and Luca Guadagnino‘s upcoming “Suspiria” remake. He is also currently penning a new adaptation of Stephen King‘s “Pet Sematary.”

Fellow showrunner Hugh was of two minds when it came to recreating the 1840s. “One part of our brain is trying to protect the period,” she explains, “trying to be as accurate and faithful as possible, down to the buttons on the officers’ coats.” But they “wanted it to also feel modern.” It helped that some of the Inuit testimonies of the real event have only been uncovered recently. “Incorporating that work into our period show tells you that the past and present are still in dialogue.” Hugh previously received a WGA nomination for her work on “The Killing” (Best New Series in 2012). She has additionally worked as a writer and producer on the shows “Under the Dome” and “The Whisperers.”

It was important to Scott that they hire the right people for such a massive undertaking, but he thought they were still “pushing their luck” shooting in Budapest on a sound stage. “I was a little concerned about the scale considering the massive width and breadth of the shots,” he admits. Yet the crew delivered, and the footage was “fantastic. Some of the best use of green screen I’ve ever seen.”