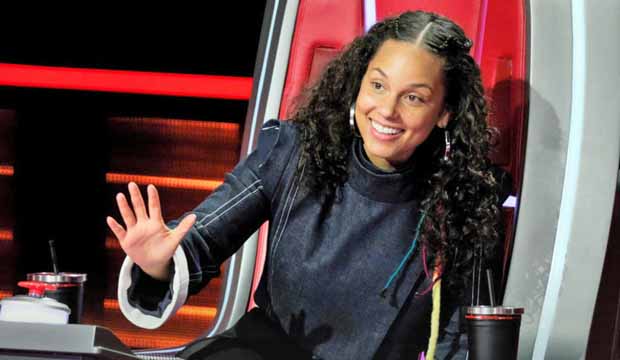 And just like that we are done with “The Voice” battle rounds for Season 14. The episode for tonight will be just one hour, so that means some actual battle pairings will be seen and others will unfortunately be abbreviated to almost non-existent. The other fun moment for Tuesday is that only one coach — Alicia Keys — has a steal remaining, so expect producers to hold that until the end of the episode. Alicia is facing off against six-time coaching winner Blake Shelton, three-time champ Adam Levine , Season 12 winner Alicia Keys and rookie coach Kelly Clarkson.

Advisors throughout this round have been Julia Michaels (Team Adam), Trace Adkins (Team Blake), Shawn Mendes (Team Alicia) and Hailee Steinfeld (Team Kelly). Since producers were showing more of the behind-the-scenes dress rehearsals, it is the least we have seen of the advisors actually on television in all 14 seasons. There has been no official word yet on who will be the overall show advisor for the knockout rounds beginning next Monday, April 2.

And now enjoy our fun recap of Night 4 on Tuesday. Our live updating blog starts below for this show tonight, so make your own comments about the performers and coaching decisions.

Be sure to view our exclusive power rankings for each of the dozen singers for each coach: Team Adam, Team Alicia, Team Blake and Team Kelly. Plus you can take a look back at our blog items for Night 1 on March 19, Night 2 on March 20 and Night 3 on Monday, March 26 plus the recently concluded blind auditions on February 26, February 27, March 5, March 6, March 12 and March 13.

Live blog below for Tuesday, March 27:

8:07 p.m. – Team Adam’s first battle pairing of the night is Stephanie Skipper versus Jackie Verna. Adam realizes they are not similar vocalists, but likes that they both have a rawness in their voice. For the song choice, Adam picked “These Dreams” by Heart. At their first rehearsal, both artists were struggling with the harmonies and inserting their own styles within this duet. By dress rehearsal, Adam was blown away by their progress.

8:15 p.m. – Jackie kicked things off with her delicate, yet piercing voice. Stephanie chimed in next, and sounded nervous. Before this battle started, I thought I would prefer Stephanie, but now that it’s happening, Jackie looks like the clear winner to me. There are great colors to Stephanie’s voice, but she couldn’t control the nerves tonight. What will Adam do?

8:18 p.m. – Blake said the song didn’t fit in either singer’s wheelhouse, but if he had to make a choice, he’d take Jackie. Kelly picked Stephanie, but think they both have cool tones. Alicia believes Stephanie is more aware of who she is, but Jackie is a raw untapped talent that will continue to evolve. After rambling in circles for what seemed like the full hour, Adam finally made a choice. The winner of this battle is Jackie! Stephanie was eliminated from the competition.

8:30 p.m. – The second battle tonight pits two of my favorite artists on Team Alicia against one another. Livia Faith looked crushed when she discovered she had to take on Terrence Cunningham, who arguably gave the greatest blind audition of the season. The reality is that Livia is probably on a suicide mission at this point because none of the other coaches even have a steal. For their performance, they will sing “Stars” by Grace Potter and the Nocturnals. At rehearsals, the duo had to work on their harmonies, but both seem like creative artists who will nail their performance. I’ll be sad to see either of these two go home this early.

8:35 p.m. – It’s finally time for the artists to take the stage! Terrence sits down at the keyboard and begins to play as Livia sings. She sounds great right from the start. Terrence’s voice and style is so unique that when he joins, it does seem to take the whole performance up a level. That all said, these two have absolutely zero chemistry together and it’s an awkward duet. As soon as Terrence starts playing around with his voice it’s totally over. It’s almost like watching a music teacher with their student. Terrence won by a landslide, but Livia has great potential and is an adorable addition to the show.

8:40 p.m. – Adam said Terrence is in his own universe. Kelly applauded Terrence for being respectful of Livia’s talent and felt they both held back, but for good reason. Blake didn’t feel either outsung the other. Alicia was impressed by the 17-year old Livia, but is drawn to Terrence’s ability to draw people in without yelling and screaming. The winner of this battle is Terrence! Livia was eliminated from the competition.

8:42 p.m. – As the night went on, some battles continued to impress the coaches, but not enough to show in full. On Team Adam, Gary Edwards defeated Angel Bonilla following a performance of “When You Believe.” On Team Blake, Austin Giorgio took out Brett Hunter with “Me and Mrs. Jones.” Then on Team Kelly, Alexa Cappelli was supposed to be paired up with Hannah Goebel, but Hannah had to drop out of the competition for personal reasons. Alexa performed “Pray” by herself and earned a walk into the Knockouts.

8:50 p.m. –  In the final battle of Season 14 we will see Team Blake’s Spensha Baker versus Dallas Caroline. By process of elimination, we know the loser of this battle will join Team Alicia. At rehearsals, both Spensha and Dallas were struggling with the range of the song Blake chose for them, “I Could Use a Love Song.” But Trace said that of all the performances he’d seen so far on Blake’s team, Spensha was his favorite.

8:57 p.m. – The song started with low notes, and now I understand their struggles in rehearsal. Neither of them sounded very good on the first verse. Once they were able to open up vocally, Dallas seemed to sing with more ease, but Spensha has far more passion. Frankly, I didn’t care for this battle and could take or leave either of these two.

8:59 p.m. – Kelly said she would choose Spensha if she had to choose. Alicia said she could sense nerves in Dallas, but is excited by her potential. Adam loves the untapped potential of Dallas, but thinks Spensha can sing anything. Blake said Spensha could turn the entire country music industry on its ear and ultimately chose her as the winner. Surprise, surprise, Alicia then stole Dallas! That’s a wrap for the Battle Round of Season 14. Tune in next week for the exciting Knockouts!