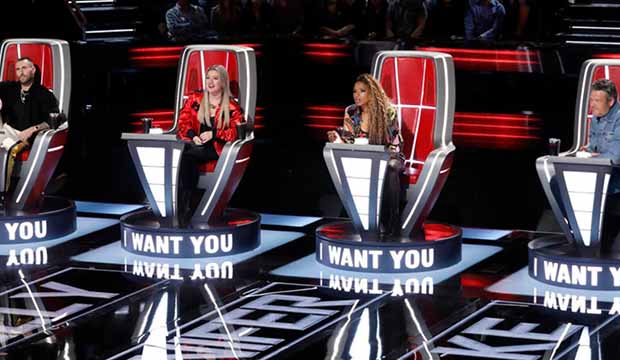 Season 15 of “The Voice” is now off and running with two blind auditions episodes already aired. As you watch Night 3 of the Emmy-winning reality TV show on NBC for Monday, October 1, follow along with our live updating blog below. We’ve got exclusive minute-by-minute detailed analysis of the performances as they are happening. Enjoy reading our coverage of last week’s episodes for Monday, October 24, and Tuesday, October 25.

Kelly Clarkson is the reigning coaching champion from last spring’s Season 14, having prevailed on her very first try. Jennifer Hudson has returned for her second time around, but did not participate last spring. Blake Shelton is a six-time coaching winner, and Adam Levine has won the crown three previous times.

And now enjoy our live updating blog item for Monday, October 1, below:

8:02 p.m. – We get right under way this week with the night’s first artist: Dave Fenley, a country artist from Tennessee that grew up in Texas with a love for and surround by music. He auditioned with the Travis Tritt song “Help Me Hold On,” hoping that either Blake or Kelly would turn their chairs for him. With his deep, raspy voice sounding across the stage, Kelly slammed her button early into the song, followed by Blake a bit later as he mimed the song himself throughout. Both Adam and Jennifer loved Dave’s performance, but acknowledged that one of Kelly or Blake was the right coach for him in the competition. Kelly’s pitch to him was that she, too, is soulful and crosses the boundaries of music genres while Blake relied on his knowledge of and experience in the country music industry. Ultimately it seems to have come down to his mom who had asked Dave to pick Blake so that he’d come backstage and give her a hug. And so he did after Dave joined Blake’s team!

8:13 p.m. – Improv comedian and wedding bang member Steve Memmolo from Boston was up next. He used his 90 seconds to sing Classic IV‘s “Spooky,” but the performance left the coaches panel bewildered until the last stretch when Adam and Jennifer each went all-in for it. Adam admitted that when he hit his buzzer he knew that Jennifer would eventually, but he wanted a crack at Steve as well. The two of them were in agreement that Steve had a bit of Michael Jackson in his voice, but maybe it was Adam’s passion for him that won Steve over and perhaps a bit of destiny because Steve always envisioned joining Adam’s team in his head.

8:24 p.m. – Third up on the night was 19 year old Californian Audri Bartholomew whose father moved her family to Missouri during her high school years where she eventually found choir as a place to feel welcomed. She sang “Never Enough” from “The Greatest Showman” to the immediate adoration of Jennifer. It wasn’t until the final big note of the song that Jennifer hit her button and as the only judge to turn their chair for Audri won her for her team. The rest of the coaches all graciously held back, knowing that Audri was meant to be on Jennifer’s team.

8:34 p.m. – Next was Rachel Messer from West Virginia who grew up with a grandfather and father that taught her bluegrass in her childhood. When she came out to sing the country classic “I Want to Be a Cowboy’s Sweetheart” Kelly was hitting her button immediately, determined to win over the female country artist she’d been pining for. For a bit it seemed as though Kelly would win Rachel handily, but in the last second Blake hit his button and jumped into the ring for the young yodeler. Blake’s pitch to Rachel was that he feels honored that she, like him, is continuing the tradition of classic country music, proving that there’s still a place for it in the industry and that’s probably what won her over and convinced her to join his team.

8:45 p.m. – Still bruised by the loss of another country artist, Kelly awaited another chance. That chance didn’t arrive with Brent Morgan from Alabama, a jingle-writing contest winner and livestreaming musician. Brent auditioned with the Portugal. The Man song “Feel It Still,” but he failed to impress any of the coaches with his guitar-playing and smooth rock performance. Adam confessed that the vocal was perfect, but the coaches all agreed that there wasn’t that extra texture that jumped out.

8:54 p.m. – Last season’s winner Brynn Cartelli stopped by the studio to inspire and encourage this year’s crop of artists. One of those artists was 16 year old Chevel Shepherd from New Mexico, a lover of country music hoping to get a chair turn from Blake. Chevel auditioned with The Band Perry‘s “If I Die Young.” Expectedly, Kelly hit her button for the young country artist, after noticing hints of Dolly Parton in her voice. Blake also hit his button and it would have been another Kelly-Blake showdown, but then Jennifer jumped into the fray in the last moment. Kelly pitched to Chevel that she saw some of herself in her, advising her that she’s a bit in her head while she sings and can help her get out of it.

9:06 p.m. – After the commercial break Chevel made her decision to join Team Kelly, despite her adoration for and shared birthday with Blake! Finally, Kelly won her female country artist that she was determined to obtain this season.

9:08 p.m. – The next artist was Bryan Cherry from Virginia, a self-proclaimed old soul set to perform the Sam Cooke song “Nothing Can Change This Love.” Bryan’s rendition was filled with the rasp and texture the characterizes most soul music, but even then it wasn’t enough to inspire any of the coaches to turn their chairs for him. As such he was set to earn a spot on Kelsea Ballerini‘s “The Comeback Stage” roster alongside Brent.

9:17 p.m. – Delaney Silvernell, a Los Angeles resident and theater actor in a family of wrestlers, was up next with her audition of “In My Blood” by Shawn Mendes. Kelly hit her button early in the performance and remained the only coach to do so despite Delaney’s deep, soaring tone. Kelly advised her that she can let go a little bit and not be set on trying to be so perfect while she sings.

9:21 p.m. – Brynn met another artist backstage before his performance–15 year old Anthony Arya who sang “Danny’s Song” by Loggins & Messina, joining Adam’s team automatically when only he turned his chair for him. Adam was impressed by Anthony’s youth and the way he engages with the audience during his performance.

9:29 p.m. – 29 year old Natasia Greycloud from Tennessee went into her audition hoping that Kelly would turn around for her. Her performance of Sam Smith‘s “I’m Not the Only One” showed off her smooth, big vocal ability. After both discussing that they were on the fence about her, Jennifer and Kelly hit their buttons at the same time, right when Natasia hit the first big run of the song. Everyone on the panel admitted that Natasia belonged with one of the big female vocalists because that’s the lane she already exists in. Jennifer won Natasia over by explaining that she is the type of coach that shows her artists that a song is more than a song and brings more to the table like theater and film training.

9:40 p.m. – Up next was YouTuber Lynnea Moorer who had a video reach 4 million views and has since developed a channel where she covers songs. Tonight she performed the Khalid song “Location,” one Jennifer immediately started vibing too as Lynnea grooved to with her gentle, contemporary R&B vocal. Unfortunately it wasn’t enough to get Jennifer or any of the other coaches to turn. Adam cautioned her that she was a bit too ambitious. Then, Kelly and Jennifer teamed up to suggest that next time she auditions she sings something with more of a vocal to show off her power. Luckily, Kelsea chose Lynnea as the artist from tonight’s episode to join “The Comeback Stage” after she riffed the Adele song on stage at the behest of Kelly and Jennifer.

9:51 p.m. – The final audition of the night came from gospel singer Kymberli Joye. Prior to trying out, she acknowledged that joining Jennifer’s team would be a “no brainer,” but eyed Kelly’s team as a chance to grow and learn new aspects of her voice. Jennifer and Kelly were already fighting over her when they heard the first notes of Kymberli’s song choice (Whitney Houston‘s “Run to You”) play. Kelly was the first to hit her button while Jennifer waited until the first part of the chorus only to find that Kelly used the block on her! It wasn’t sealed for Kelly though because Blake also hit his button right at the end of the song and fought hard to get Kymberli on his team. In the end, Kymberli admitted that her choice was always going to be between Jennifer and Kelly and since Kelly used her block it meant that she would join Team Kelly!

9:59 p.m. – Tomorrow we continue with Night 4 of the auditions. The teams stand at Adam with 5 artists and Kelly, Jennifer and Blake all with 6 apiece. What is Adam waiting for? Is his picky strategy going to work out for him this season? Sound off about that and other topics, including your faves of the season so far, below in the comments!