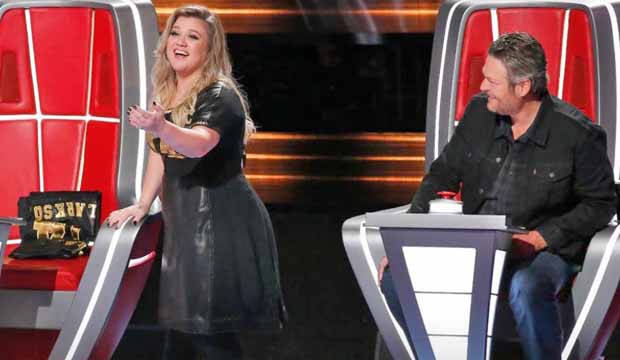 Have we already seen the potential winner of “The Voice” Season 14 on the first two nights of blind auditions last week? Or will your favorite of the season be performing on the episode for Monday, March 5? Enjoy our live updating blog below for this two-hour episode and make your own comments about tonight’s artists.

Kelly Clarkson is the brand new coach for this season and was a special advisor on Season 13 last fall. She has joined Season 12 coaching champ Alicia Keys, six-time coaching winner Blake Shelton and three-time top coach Adam Levine. Carson Daly has returned as the program’s host and one of its Emmy-winning producers for NBC.

Before watching the newest blind auditions, take a look back at our blog items analyzing every performance from Monday, February 26 and Tuesday, February 27.

Over the following weeks, battle round episodes will follow the blinds. Advisors will be Julia Michaels (Team Adam), Trace Adkins (Team Blake), Shawn Mendes (Team Alicia) and Hailee Steinfeld (Team Kelly). The knockout round will follow the battles and then the live episodes where you can vote for your favorites. Once the live playoffs start you will also be able to make picks each week in our predictions center. While that is not yet open for “The Voice,” you can already make predictions for such reality TV shows as “Survivor,” plus Independent Spirit Awards, Oscars, Razzies and more.

Live blog below for Monday, March 5:

8:02 p.m. – On Night 3 of the Blinds we’re kicking it right off with the first artist of the night, Christiana Danielle a 22 year old from Fort Wayne, IN who was raised by a gospel-Christian rapping mom! Christiana however is more of a jazzy, blues singer and for her audition has reworked Drake‘s “Hotline Bling.” Just a few notes in, Adam hits his button, but Kelly and Alicia let her get into the groove of the song before they, too, turn around. Only Blake fails to throw his hate into the ring for her. Kelly pleads for Christiana to give her a chance, thinking that she’s likely to go with Alicia instead. Adam, on the other hand, is more confident and tells her that she’s one of the best singers he’s ever heard. But after hearing all three coaches out, Christiana joined Team Alicia!

8:15 p.m. – The next artist is Brett Hunter, a 30 year old from Pasadena, CA that gave up his 9-to-5 job to move in with his brother and focus on his music career. Brett understands the sacrifice that his brother is making for him and sees the show as his opportunity to take control of his own future. With a ukulele-accompanied rendition of “She’s a Bad Mama Jama” Brett managed to get a turn from Blake, but never got the other three to look passed their hesitations.

8:26 p.m. – Third up is a singing telegram performer, Jamai from Chester, PA. His audition of Usher‘s “U Got It Bad,” a faithful interpretation of the song, took time to inspire Alicia and Kelly to hit their buttons, but both did eventually. Though Alicia seemed like a lock for Jamai’s choice, he gave Kelly a lot of props as a versatile performer in her own right. Kelly’s advice for Jamai was that he should choose songs that aren’t necessarily in his wheelhouse where he sounds so similar to the original artist. Even so, he went with Alicia in the end–her second grab of the night!

8:37 p.m. – Reggae singer Mitch Cardoza, a 22 year old from Dartmouth, MA, has been surrounded by music his whole life–both his parents instilled music in him from an early age. His audition track, “No Woman, No Cry,” one of his favorite songs, may have been too sentimental of a choice because he failed to win over any of the coaches.

8:45 p.m. – Mia Boostrom, 24 years old from Boston, MA, is a piano player who started singing from a very young age, but struggled with weight problems in her teenage years and left music due to a lack of self confidence. She sees the show as her second chance to live out her dream and regain what she lost. For her audition she took on Zayn‘s “Pillowtalk,” transforming it into more of a power ballad than it is known to be. Adam was the only coach to turn for her, but that’s all she needed to advance!

8:54 p.m. – 21-year old Jackie Foster from San Diego, CA, is already a lead singer of a band in Boston. She’s been singing her entire life, including musical theater at a very young age. Taking on Pink‘s “What About Us,” Jackie caught the attention of the coaches from the very beginning with her clarity, smooth texture and control over the big chorus. Kelly was the first to hit her button, but in the last moments Blake teased Alicia into hitting her button as well. Both coaches fought hard to get Jackie and she chose…

9:05 p.m. – … Kelly! Jackie was really drawn to Kelly’s versatility and thinks she can help her try new styles throughout the competition.

9:07 p.m. – The next artist is Kayla Woodson, a 23 year old country music artist from Waggman, LA. Like many of the artists tonight, Kayla has been focused on becoming a music star for her entire life, including having moved to Nashville to pursue the career. From the start of her audition to “Turn on the Radio,” Kayla found a groove with the country rock song, but didn’t receive any support from the coaches. Blake told her that she was over-shooting the notes and that’s what kept him from turning around for her.

9:15 p.m. – Reid Umstattd, 34 year old bartender from Austin, TX, has performed in a band since junior year of high school, but since marrying his wife he quit the band and has for the most part stepped away from creating music altogether. For him the show is about returning to his passion, but is also his first solo performance ever! For that solo he chose Elton John‘s “Take Me to the Pilot,” quickly earning Adam and Alicia’s respect. Taking into account both arguments, Reid went with the more obvious pick and chose Adam.

9:26 p.m. – The unique thing that Jorge Eduardo, 23 year old from Guadalajara, Mexico, brings to the competition is that he was a four-chair turn and fourth place finisher on “The Voice of Mexico.” Jorge came to the U.S. version in order to expand his career and to bring something new to the show. With the hit “Despacito” Jorge scored a turn from Kelly almost instantly and she was out of her chair dancing! Stupidly none of the other coaches turned their chairs–I think Kelly may have scored a secret weapon here!

9:31 p.m. – After Jorge, we saw Kelly and Blake both turn for Jamella‘s performance of “Dive” (she chose Kelly) and Adam add Angel Bonilla to his team after her audition of “Lay Me Down.” Both Jamella and Angel dedicated their journeys on the show to their parents who have supported them unconditionally.

9:38 p.m. – From Rochester, NY, 21 year old Austin Giorgio is not only a jazz singer but an avid dancer as well. Currently performing at events, Austin hoped to take his career to the next level with his audition of standard “How Sweet It Is (To Be Loved by You).” True to his promise, Austin worked the stage like I haven’t seen a contestant work it before and Blake, after turning his chair, was all smiles. Sadly for Blake, Kelly also turned her chair, setting up another head-to-head between the two. Because of his friendship with Michael Bublé, Austin chose Blake!

9:48 p.m. – The final artist of the night is the 26 year old karaoke host from New York, Johnny Bliss. Johnny’s goal for his career is to be a crossover artist that goes between Spanish and English music. With that in mind he took on “Preciosa” by Marc Anthony, a song he sees as a tribute to Puerto Rico following the hurricane. Johnny became the only four-chair turn of the night, beginning with a quick turn from Adam, followed by a twin turn by Alicia and Kelly, but to Kelly’s dismay she was blocked at the hands of Adam! And after noticing her block, Blake hit his button and joined the conversation. On his feet, Adam made a passionate plea for Johnny to pick him, but Alicia made her personal pitch and Blake offered his charm and tried throwing Adam under the bus. And before he could choose, Alicia pulled out her big guns and serenaded Johnny with a Spanish rendition of her song “If I Ain’t Got You,” and it worked. Johnny joins Team Alicia–watch out! Could this be back-to-back wins for Alicia as a coach? It’s possible!

10:00 p.m. – Join us for Night 4 of the blind auditions tomorrow night and the episode’s teaser promises a shockingly good performance that leaves Alicia wondering why the artist isn’t already on the radio.