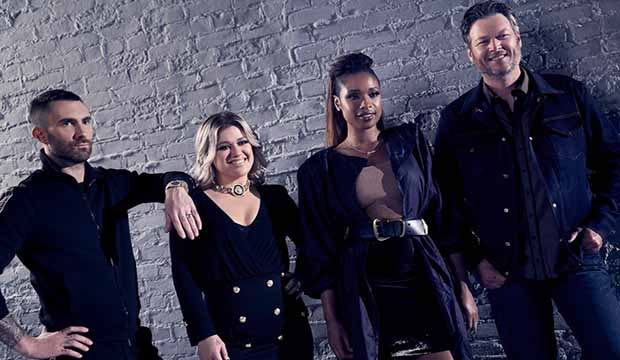 After just three episodes of Season 15 for “The Voice,” there is a growing sense that longtime coaches Adam Levine and Blake Shelton are being upstaged by the ladies. Do you agree that Kelly Clarkson and Jennifer Hudson are getting the better artists during this fall season?

Watch Night 4 of the Emmy-winning reality TV show on NBC for Tuesday, October 2. Follow along with our live updating blog below and make your own comments about the singers. We’ve got exclusive minute-by-minute detailed analysis of the performances as they are happening. Enjoy reading our coverage of last week’s episodes for Monday, October 24, and Tuesday, October 25 plus this week’s show on Monday, October 1.

Clarkson is the reigning coaching champion from last spring’s Season 14, having prevailed on her very first try. Hudson has returned for her second time around, but did not participate last spring. Shelton is a six-time coaching winner, and Levine has won the crown three previous times.

And now enjoy our live updating blog item for Tuesday, October 2, below:

8:08 p.m. – Tonight’s episode gets started with 13-year old Reagan Strange. The high school freshman started singing at the age of nine when she performed the “Star Spangled Banner” at a Grizzlies game. She’s hoping for Blake to turn his chair for, if nothing else, to see him point at his own head. She’s singing “Meant to Be” by Bebe Rexha featuring Florida Georgia Line and Adam is quickly the first to respond by hitting his buzzer. Moments later, Blake follows suit while Kelly and Jennifer remain in place. Reagan has a solid voice, but there would have to be a lot of growth for her to go far. Adam reminds Reagan that he turned around first and loves her effortless power. Blake points out that he has won with artists of all genres, but despite his best efforts Reagan chose to join Team Adam!

8:18 p.m. – The second artist tonight is Foushee‘, a cafe singer who performs on a stage once graced by Jimmy Hendrix and Bob Dylan. Her mother performed in a Jamaican band and was the victim of a devastating car accident that left her learning to walk again. Foushee’ is singing “Red Bone” by Childish Gambino which shows off a unique artistry and separates her from the crowd. Jennifer is first to turn for the soul singer and Adam quickly hits his butter upon hearing her strong whistle register. Kelly and Blake look impressed, but did not turn around. Foushee’ has a lot of stage presence and it’s clear she knows how to work a stage. Jennifer loves her sound and said it took her on a journey. She couldn’t tell if Foushee’ was a woman or a young boy. Adam says she transcends the technical and he wants to be a part of it. In the end, Foushee’ chose Team Adam! Jennifer can’t believe it and Adam is two-for-two tonight!

8:26 p.m. – Next up is Wyatt Rivers, a 22-year old medical student who is more familiar with a science lab than a stage. After finishing his Bachelor’s Degree he decided to record a few songs and is taking it to another level by auditioning on “The Voice.” He’s singing “River” by Leon Bridges and displays a quality tone, but didn’t quite show the range the coaches were looking for. Unfortunately, Wyatt is heading home but it sounds like he has a pretty good fall-back career going for him. On top of that, he’s joining Kelsea Ballerini‘s “Comeback Stage” so we could be seeing him again!

8:35 p.m. – Chris Kroeze is from small-town Wisconsin and plays 230 shows a year. He’s a long-haired, bearded country singer who hopes to make his community proud by turning a red chair tonight. Singing “Pride and Joy” by Stevie Ray Vaughan, his bluesy voice sits in comfortably and it’s clear he is a seasoned performer. Blake almost immediately turns around and Jennifer follows suit. A musician of his caliber can easily make the top 10 and it seems like each season we see someone of his ability do just that. Jennifer was so impressed she almost tossed a shoe and is ready to fight Blake for this one. Blake says Chris’ singing is electrifying and he can make it to the finale. Quite predictably, Chris chooses Team Blake!

8:45 p.m. – Tonight’s next artist auditioned in Season 14 but failed to turn a chair. MaKenzie Thomas, a 20-year old pop singer from Kentucky is hoping to make a better impression this time around. I love returning artists! She was devastated when she got cut last spring and suffers from insecurity because she doesn’t “look the part” of a pop star. Tonight she’s singing “Big White Room” by Jessie J and thinks she will cry if she turns any chairs. She begins singing in her gorgeous head voice and sounds pitch perfect this time around. Finally Jennifer can’t take it anymore and hits her buzzer as MaKenzie turns up the heat vocally. The three coaches who refused to turn last season denied her once again, but luckily Jennifer hears something they don’t. MaKenzie has joined Team J-Hud!

8:59 p.m. – The final artist of the night is Sandyredd and she looks like a firecracker! She sang background for her mother and music is the fabric of their family. She had a son at a young age and now at 35 years old she’s ready to chase her dreams again. She also started a performing arts program in honor of her mother who has passed away. Sandyredd is singing “River” by Bishop Briggs and all it takes is one quick, vicious run for Jennifer and Adam to turn around. She quickly begins just SHREDDING the stage and Kelly and Blake turn next. This woman is a beast and the coaches are gobsmacked. Jennifer threw a shoe, Kelly threw a jacket, Adam took off his tennis shoe and Blake decided to give Sandyredd his coffee mug. When Sandyredd reveals she’s a Chicago native Jennifer loses it. Meanwhile, Kelly is speechless and hiding behind her chair. Blake all but folds, but says she deserves a four-chair turn. Kelly can’t form words and finally says she just can’t wait to watch Sandyredd each week. Adam says she can win and she should do it on his team. Kelly finally fights back and says Sandyredd shouldn’t box herself in. Jennifer says “it’s your moment!” and finally Sandyredd makes a decision. She is joining Team Kelly! Kelly is absolutely blown away. That’s a wrap for tonight folks!